Apostle Bosio Eddie of Ntinda, 42, appeared before the Buganda Road who remanded him till August Friday 2.

“Apostle Bosio Eddie and others still at large between December 2018 and 19th July at Kigowa Ntinda, Nakawa Division Kampala in the Kampala District installed and were found guilty of operating radio broadcasting apparatus for IAM FM without a license issued in the Uganda Communication Commission,” reads the charge sheet. 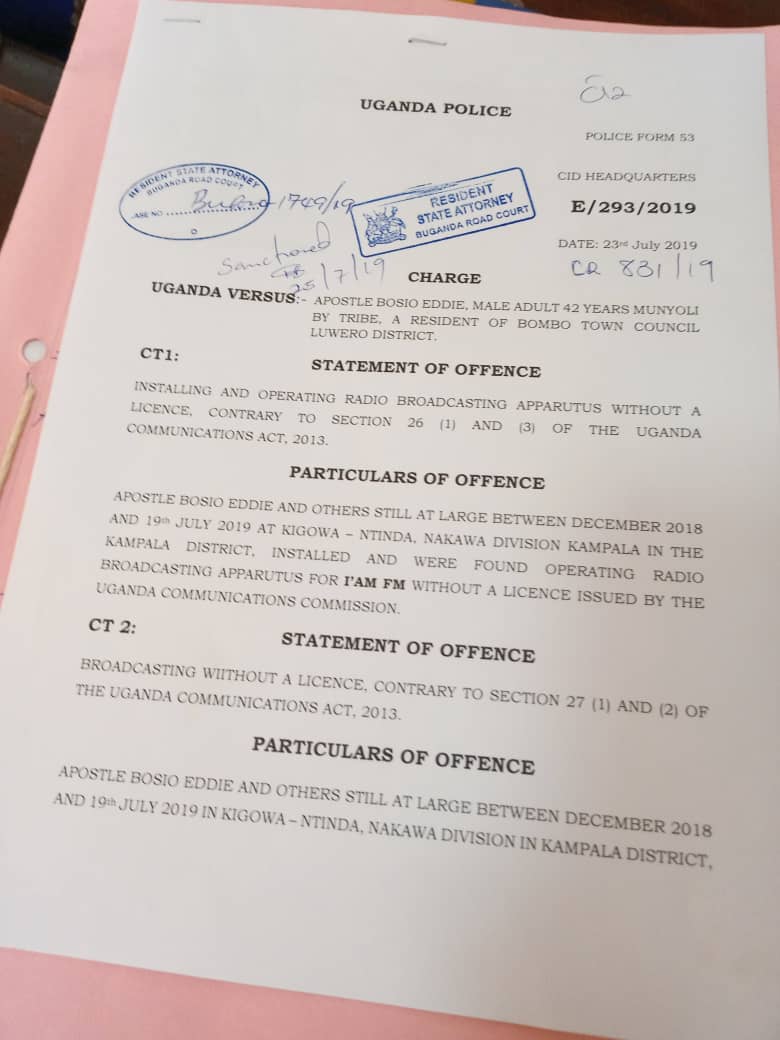 He was arrested by the UCC team for airing church services on his illegally installed 104.3 IAM FM station.

Mr. Bosio denied the charges preferred against him.

Mr. Abdul Salim Waiswa, the head legal at UCC said that the reason why everyone should have a license is to ensure that there’s order, professionalism and effective utilisation of the broadcasting equipment and frequencies.

“We believe that the evidence we so far have is sufficient to have this man convicted, he has denied the charges but we have evidence, he was found broadcasting,” he told journalist.

He said the offence of installation without with a license carries a maxim sentence of five years in prison or fine of up to 80 currency points which is about UGX960,000.

“Many of Ugandans don’t understand the gravity of the offence [illegal broadcasting], ” said Mr. Ibrahim Bbossa, the Head Public and International Relations at UCC.

He told journalists outside court that illegal broadcast can cause interference and danger to other services including security agencies and air operators that use the same.

“Some of the frequencies that errant people are trying to violate have been issued to other sensitive operations like security, aviation and it is possible for somebody to cause a catastrophe by self allocating and self assigning frequency that has not been issued by the Commission,” he warned.

He said that UCC engages in daily monitoring and supervising of the frequencies within the country, It was found that there was unknown frequency that broadcasting in Ntinda.

“We usually have mobile and fixed equipment that analyse frequency as spectrum in the country and are able to pin point each and every broadcast signal,” he explained adding that “because this signal was not know to the commission our enforcement and investigation team followed and they found that there was actually equipment that was installed and actually being broadcast as a radio station.”

Mr. Bbossa said UCC is mandated to make sure the spectrum is well utilised and that illegal operations as well as interference minimised.

UCC last year planted equipment worth billions in Masindi and Mbale to crack the whip on illegal and non-compliant broadcasters.

Traditionally, without this equipment, the practice involved sending a team to collect information on non-compliant broadcasters.

Besides generating signals on unregistered broadcasters, UCC said the same technology would enable it to collect information on broadcasters whose rights have been suspended.
UCC says, compliance to broadcasting requirements stands at 60 per cent.

“Two way radio operators and cellar operators are at a much higher percentage of compliance. The main challenge remains among broadcasters. It is mainly issues like stations going out of their bandwidth and interfering with another’s frequency,” Ms. Irene Kaggwa, UCC director engineering and communications infrastructure said in Kampala recently.

The law defines broadcasting as the transmission of sound, video or data intended for simultaneous transmission to the public.

Mr. Waiswa also said that UCC it will now start a nationwide programme to arrest and prosecute all operators of community audio towers locally known as Bizindalo especially those who have defied the UCC directive to dismantle them.