KAMPALA – Uganda’s Murchison Falls is under attack after a private company proposed to construct a hydro power dam along River Nile in the Murchison Falls National Park area.

Bonang Power and Energy (PTY) Ltd a South African based company intends to establish a hydro power plant in areas of Kiryandogo and Nwoya near the falls.

The company plans on generating and selling of electricity.

In a notice dated June 7, Electricity Regulatory Authority (ERA) acknowledged receipt of notice of intended application for a license from the energy company.

ERA noted that the energy firm intends to undertake detailed feasibility studies and other activities which will lead to development of the power project.

“The generated power will be sold to the Uganda Electricity Transmission Company Limited and fed into the National Grid,” the ERA notice read.

“The proposed installed capacity of the project is 360MW,” ERA noted.

In the same notice, the Authority has given 30 days to directly affected parties to make comments and lodge objections (if any) in respect to the notice.

However this license application has attracted immediate outcry from the the tourism sector with players raising a red flag over the obvious negative impact of such a project.

Lilly Ajarova, Uganda Tourism Board (UTB) Chief Executive Officer equated the proposal to “madness” saying there are options for the required development.

“The Murchison Falls must not be destroyed,” she said.

“Who in their right mind would want the destruction of Murchison Falls?,” she noted

Ms Ajarova added that Murchiosn falls is an iconic feature that is spectacular and none like it else where.

The UTB CEO regarded Murchison Falls with an eco system that has both endemic and endangered species.

She said that “if destroyed will not only affect the nation but the global community with species extinction, climatic change, among others.”

The government on the other side, according to President Museveni, has taken a strategic decision to prioritize the development of the energy infrastructure which he says has accelerated industrialization and economy development at large.

“It plays a crucial role as a major catalyst for social and economic development,” said Museveni during the State of Nation address on May 6.

At the same address, the president highlighted that the tourism sector has increasingly become important to Uganda’s economy.

This puts both the Energy sector and the tourism sector at crossroads.

This is where the Nile explodes through a narrow gorge and cascades down to become a placid river whose banks are thronged with hippos and crocodiles, waterbucks and buffaloes. 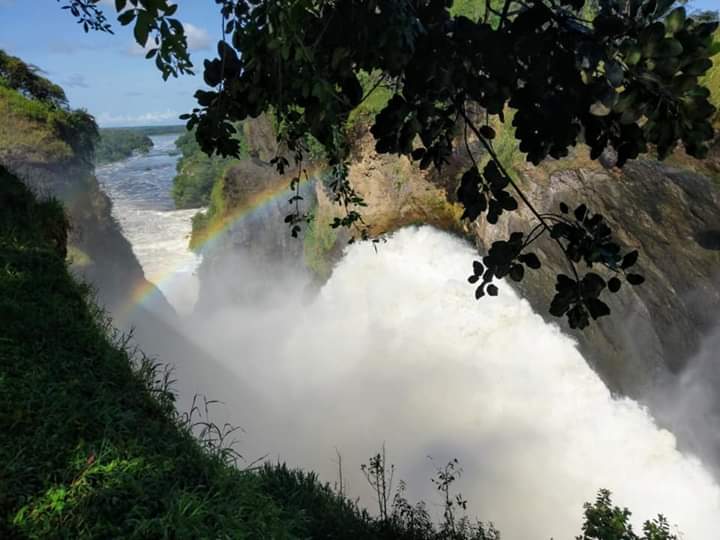 Right on the peak of the Murchison Falls, the waters of the Nile force their way through a small slit within the rocks, which is just 7 meters or 23 feet wide, and topples to 43 meters or 141 feet below with a thunderous roar forming a residual water stray that forms a beautiful rainbow.

The view is very breathtaking!