KAMPALA – The Pharmaceutical Society of Uganda (PSU) has come out and denied that pharmacists in the investigative video entitled “Stealing from the sick” that was aired by NBS TV and BBC are not part of their team. They want stations to edit the story.

PSU adds that the said pharmacists have never been part of their society saying that NBS and BBC stations aired an inaccurate version of the documentary.

The documentary exposed top medical facilities in the vice of stealing and sale of drugs illegally.

In a statement released, the society states that BBC should remove, re-edit, and re-upload on its various sites and social media pages, within the next 72 hours.

“The persons involved in the theft of medicines were not Pharmacists. It is therefore imperative that the government considers reviewing the handling of medicines within the public sector and places them in hands of pharmacists”, read the statement in part 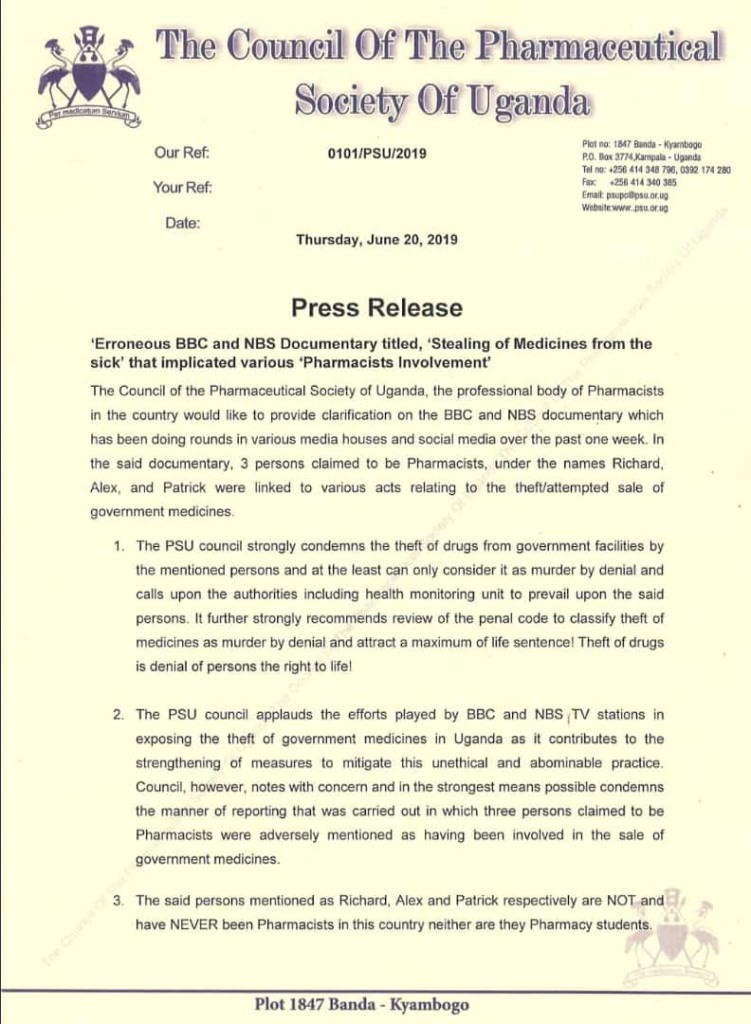 The society adds that the story was not aired well because they tried to clarify with BBC about the said person a one Alex, who was in the video that he is not part of Lacor hospital as claimed in the program but the station went on with the airing of the program.

“We are also disappointed that there were no efforts to ascertain from the Council of PSU and the pharmacy board of the ministry of health that these were pharmacists” continues the statement.

The reporter in this video, Solomon Sserwanjja along with other fellow journalists were arrested by police on claims that he was stealing drugs and that he was trespassing on people’s premises without their notice but the court later granted them bail.