Mr. Museveni said that his mission is to familiarize the locals with wealth creation as the way of fighting poverty.

“I met leaders of Karamoja sub-region at Boma Grounds in Naitakwai, Moroto Municipality to familiarise them with my wealth creation agenda, so they can ably relay it to our wanainchi,” said the president.

He educated that much as peace and infrastructural development are needed, income is more important, thus encouraging people to focus more on commercial farming.

“Just like I have said elsewhere; having peace, infrastructural development is not enough, we must add household income. I urged the people of Karamoja to abandon subsistence or farming for the stomachs.” 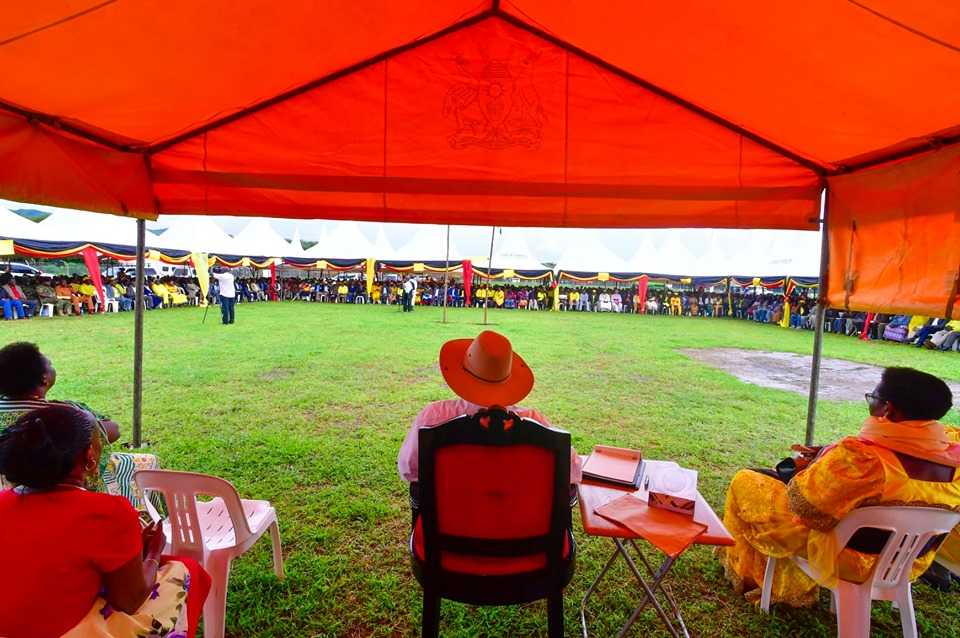 Mr. President also said that the persistent issue in Karamoja region now is water. “We are going to solve this completely. The minister (for Karamoja) tells me that one dam would cost about Shs6b. Let us build at least 20 big dams to deal with the water problem here.”

“Once we get enough water, farming will be much easier to commercialise, then we shall also introduce dairy cows so our people can sell milk and earn,” he added.

He encouraged the locals to neglect huts saying that “Having manyattas (huts) then it rains and you stay awake all night is not living, it is surviving. So we must build better houses, and this is only possible when we abandon our subsistence methods of farming and make money to impact our lives positively. Stop farming for the stomach, stop nomadism.”

He is also looking forward to opening a farm in Karamoja as a demonstration center for the locals.

“I will start doing some farming here (in Karamoja) myself so that I challenge you,” he said.

Speaking at the Heroes day event held in Kasanje, Wakiso district on Sunday 9, Museveni urged all citizens to explore avenues that create wealth.

He said that the government has put a lot of emphasis on infrastructure development but still has a problem of eliminating poverty amongst some communities.

Mr. Museveni pointed out that development is for all while wealth belongs to an individual, company or corporation.

He cautioned every citizen to engage in income generating facilities like commercial farming, setting up small scale industries (like maize mills or bakery), service delivery (like exploring public transport-boda-boda) or investing in information communication technology to eradicate poverty.

“Everybody should engage in wealth creation to fight poverty,” stressed the President.

The President also implored citizens to embrace the 4-acre model of agriculture to use the available land effectively.

He said one acre can be for piggery, one acre for coffee, one for vegetables and one for fish farming, depending on what one wants to engage in.