KAMPALA – A man calling himself a Concerned Uganda citizen has petitioned the Speaker of Parliament, Rebecca Kadaga asking her to block the Parliamentary Committee on Commissions, Statuary Authorities and State Enterprises (COSASE) from launching fresh investigations into central bank’s role in closure of commercial banks.

Michael Busingye has in a petition alleged that the new COSASE chairperson, Mubarak Munyagwa is trying to give some senior officials at the central bank a second chance to table accountability for UGX 478 billion which they failed to account for in the first probe that exposed a rot in the bank.

Under parliamentary rules of procedure, he says the committee does not have powers to re-examine the case.

He added: “To put this into perspective, Cosase had an over three months interaction regarding the Bank of Uganda matter where at it came up with observations, recommendations and  is awaiting treasury memorandum for corrective actions to be taken.” 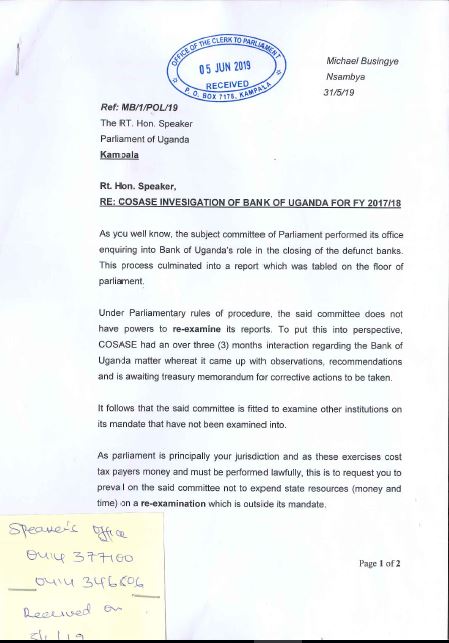 “….this is to request you to prevail on said committee not to expand state resources (money and time) on re-examination which is outside its mandate,” he noted in a petition that was received by speaker’s office.

He also alleges that this is a syndicate and diversion created by Deputy Governor Louis Kasekende and Director Tullow Oil Jimmy Mugerwa to sabotage the previous findings of the former Chairman Abudu Katuntu.

This has come days after members of parliament also protested Munyagwa’s plot, labeling it a duplication and wastage of country’s resources and time.

The MPs said Cosase should interest its self in making sure that the recommendations of the committee are taken up by the responsible authorities in government.

Hamson Obua, the Ajuri County MP condemned the duplication and wastage of the country’s resources and time by Mr. Munyagwa.

Mr. Munyagwa has on previous attempts didn’t pick our repeated calls while his Deputy Mr. Kasozi’s telephone number was switched off by press time.

We were misled! Police apologise over storming Buganda clan meeting