KAMPALA – The army leadership has lebelled as malicious a story by Sunday Vision that Uganda People’s Defense Forces (UPDF) a top General is linked to the recent botched city robbery after CCTV footage review.

Speaking to this website Brigadier Richard Karemire said the story carried by Sunday Vision, a state run paper that a  UPDF General is involved in city robbery is malicious and ungrounded.

UPDF refutes the story in Sunday Vision, ” he said maintaining that no General is a suspect in the mentioned case by the State-run paper.

“None of those soldier arrested by CMI was attached to any General,” he said refuting all claims by Sunday Vision.

He said all the mentioned officers have since been charged and remanded but they are not connected to any General as reported by Sunday Vision. 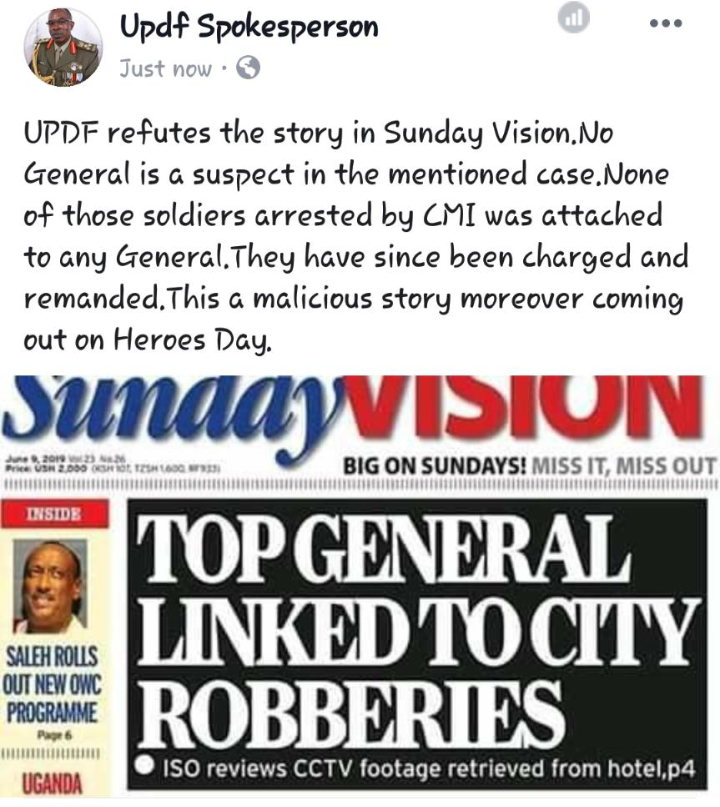 “This is a malicious story moreover coming out on Heroes Day,” he added.

The New Vision claims that Internal Security Organization (ISO) reviewed the footage from Fang Fang Hotel identifying a number of top Generals as backers of the would be daylight robbery.

Early this week UPDF senior officers were arrested in a foiled hotel robbery in Kampala.

The four were arrested by the ISO in collaboration with the elite Special Forces Command (SFC) that guard the First Family and VIPs.

Mr. Karemire confirmed that the soldiers had been arrested and remanded.

“We have arrested the would-be robbers. Investigations have commenced,” Brig. Karemire said.

We independently established that the arrested soldiers who had raided Fang Fang restaurant in the middle of the city include Corporal Majid Abbas, Lance Coporal Ivan Asiimwe, Private Joshua Chandini and army driver Ivan Opio.