Mr. Kateregga has since demanded the University to give the government-sponsored students their money which is meant to facilitate their internship and recess term.

During a media briefing held at the University’s Guild offices, Mr.  Kateregga said the failure to allocate the funds in time had hindered students’ academic progress and exposure in the field of learning.

He said students were stuck in halls of residence for three weeks now because they have not yet received any money from the university to facilitate their internship.

He added that some students on recess term had no food for three weeks now because the university had not given them the money. 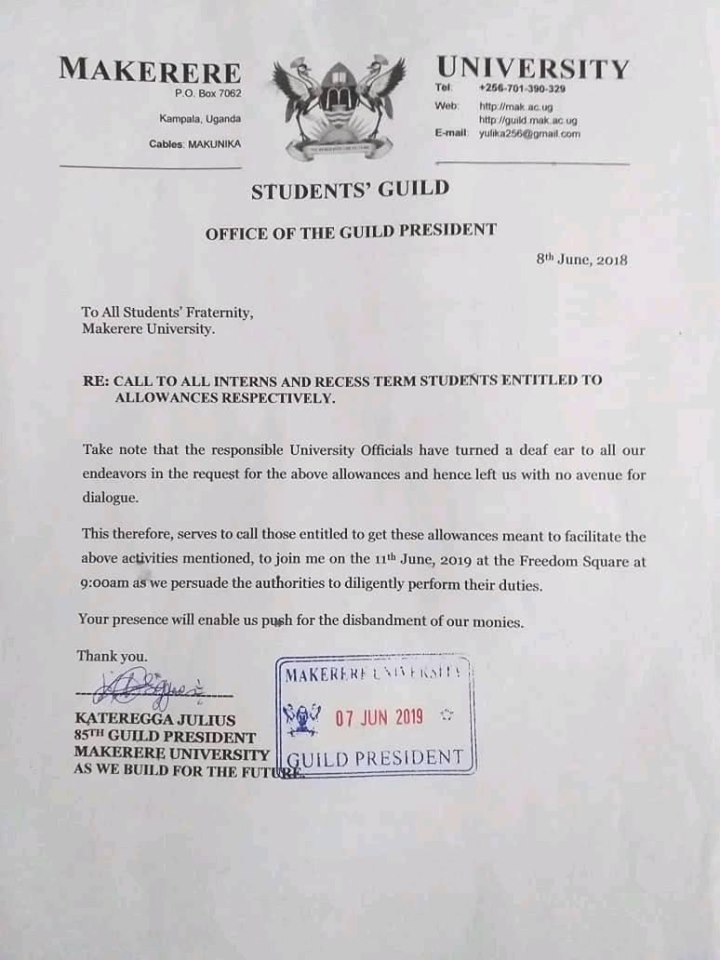 According to Judith Nalukwago – the Guild Vice President, every government-sponsored student currently on recess is entitled to UGX 4500 daily for meals which sum up to over UGX300,000 every month.

Ms. Nalukwago said some students especially those with internship placements in Kampala were facilitating themselves in anticipation of funds from the University.

Ms. Nalukwago who is also a medical student said that her fellow students at the College of Health Sciences (CHS) had not yet gone to their internship placements because they had not yet received facilitation from the university.

She said most of their placements were far away from the Kampala and required facilitation for them to go.

“How do you expect me to go to Abim far away in the north without proper facilitation yet am supposed to go and offer services, learn and do research,” she quizzed.

She revealed that the university had promised to give them their facilitation fees amounting to over UGX 280,000 per student by the end of this week.

The Makerere University Students’ Guild has also contested against the government’s new policy on tuition collection in all public universities.

This comes after a directive government passed in April this year ordering Uganda Revenue Authority (URA) to collect tuition for all public universities in the country.

Recently the Ministry of finance raised concerns about the abuse of tuition fees by public universities saying some universities under declared fees than the actual fees paid by students.

Kateregga has accused the government of aiming to cripple the University’s performance and independence.

“Universities have a right to self-autonomy. The intention of government is to turn Makerere into a primary school,” a frustrated Kateregga said.

He added that the move by the government to have URA collect tuition fees was absurd because the government is supposed to consult every stakeholder in the University.

Dr. Muhammad Kiggundu the University Manager of Communications and International Relations said they were aware of how students had been affected by the delay in remitting the facilitation funds for both internship and recess.

He said the university had no funds but are now certain that they are going to receive funds from the Ministry of Finance.

“The university management has engaged the Ministry of Finance and money to facilitate all students and lecturers is going to be reminded,” he said.

He also commented on the new government tuition policy saying it was cumbersome.

However, he said the University was engaging the responsible authorities to come up with better solutions.