This page is carrying live updates from the event, which is taking place at Kampala Serena Conference Centre, as well as related information and social media interactions in the buildup. Don’t forget to refresh this page for updates.

Kasaija: Coffee export volumes in 2018 increased by 6% to 4.5 million bags (valued at $492 million) compared to 4.2 million bags in 2017 ($470 million).
In order to further support commercialization of agriculture, the FY2019/20 budget will prioritize provision of storage facilities and linking farmers to agro-processing facilities to support agro-industrialization and provision of irrigation infrastructure.

Kasaija: One private and three public industrial parks are already operational at Kapeeka, Namanve, Luzira and Bweyogerere.The Namanve Industrial Business Park is 40% complete but already has 33 operational factories with an estimated 15,000 jobs created. In order to speed up industrial growth, the FY 2019/20 budget will, among others, establish the Industrial Skills Production Centre in Namanve.

To tackle to biting issue of climate change, he says re-afforestation and restoration of wetlands must be undertaken as a matter of urgency.

He says destruction of wetlands and forest cover “we’ll be penalized through the enforcement of environmental laws and regulations. Local governments must enact and enforce ordinances on tree planting, efficient waste management and wetland conservation”.

Kasiaija says that the Government has “already successfully laid the foundation” for Uganda’s industrialization.

Key bottlenecks, including inadequate electrify and transportation infrastructure and lack of basic education and health have largely been addressed.

Commercialising agriculture has the greatest potential for increasing household productivity and incomes, says the finance minister. But this should be done while also addressing unemployment in the rural communities. 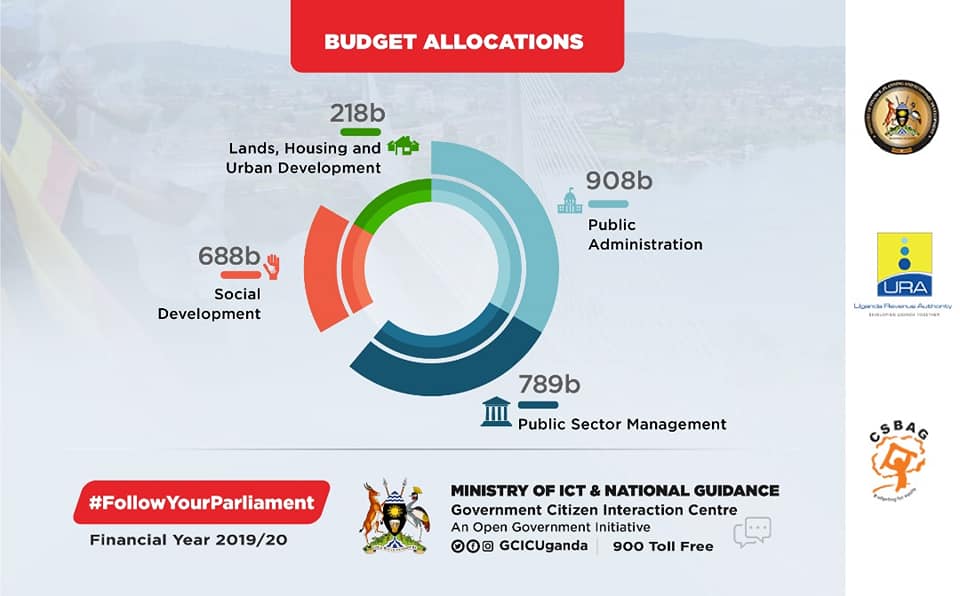 Kasaija on Microfinance:  I have allocated an additional UGX40 billion to the Microfinance Support Centre for lending at affordable interest rates not exceeding 12% p.a.

Kasaija on special programmes:   for women: Special programmes to enhance access to credit for youth and women will also continue to be implemented (UGX130 billion and UGX32 billion allocated respectively).

– Domestic prices remain stable. Average inflation was 3.4%, well within the policy target of 5% per annum.

– The Uganda Shilling has largely been stable against major currencies.

– The financial sector has continued to strengthen. Non-performing loans reduced to 3.4% at the end of December last year, compared to 5.6% the previous year.

Government spending excluding domestic debt refinancing this financial year is projected to be sh24,297bn, which is equivalent to 22.1% of GDP.

Kasaija: Access to affordable finance is an important catalyst for the growth of viable private sector enterprises. However, commercial bank lending rates remain high. This calls for government interventions.

Matia Kasaija: In order to avoid wasting and leakage of the benefits from minerals, oil and gas resources, proceeds of extraction will be invested for both the current and future generations.

The agriculture sector maintained its recovery, sustaining a 3.8% growth rate in 2018/19.

The minister says enforcement of fishing activity helped in the recovery of fish catches and that provision of extension services and control of pests and diseases also boosted harvests in crops such as maize, beans, fruits and vegetables.

The services sector grew at 7.2% last financial year. It was the highest rate of all the sectors.

The industry sector grew at 5.8% this year.

With Africa’s economic performance continuing to recover on the global scene, the minister says the EAC region is the fastest growing economic bloc in Africa. 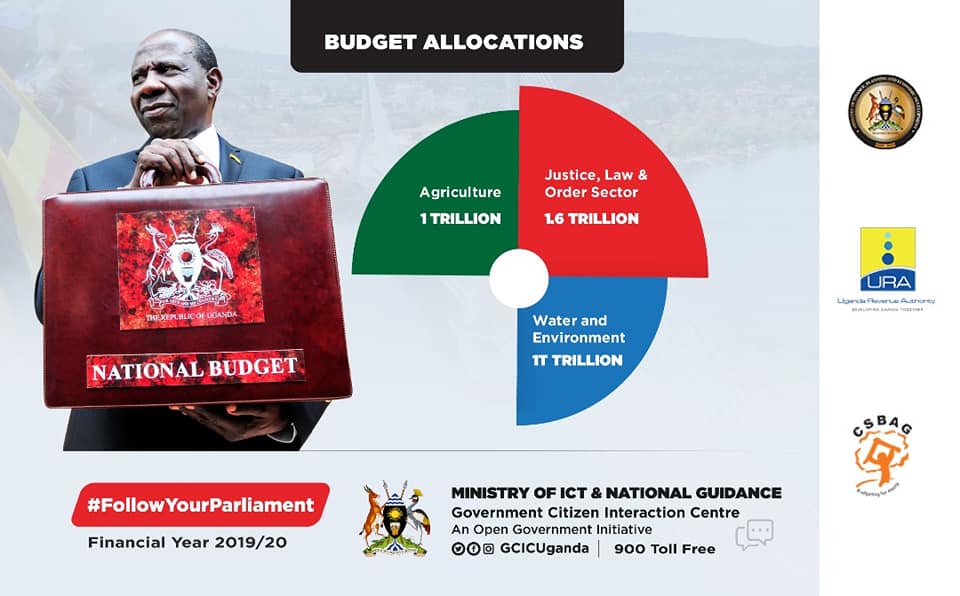 Kasaija: Unemployment remains a challenge. With 600,000 new entrants in the job market annually, there is need for more jobs.

Kasaija: Income inequality has widened as wealth hasn’t been created faster in rural areas hence the president traversing the country to show people how to create wealth.

Minister Kasaija – Uganda’s economy has recovered and picked momentum, growing at a rate of 6.6% per year over the past three years. Also the Average incomes of Ugandans have increased $825 per person In the Financial year we are about to end, compared to $800 last year.

TRENDING: National Budget FY 2019/20 is set to be delivered this afternoon at @Parliament_Ug. 1. What are your expectations on the #UGBudget2019
2. What sectors do you think should be prioritised to drive dev’t in #Uganda #KnowYourBudget19 pic.twitter.com/xVcNHLkzvm

He says “53% of children under five years are malnourished and hence anemic, and 29% of them are stunted or wasted”.

Meanwhile, inappropriate feeding, especially among the more affluent, is a major cause of a surge in chronic non-communicable diseases. Coronary heart disease, cancer, diabetes, high blood pressure and obesity are some of them.

The minister says that Uganda has made substantial progress towards the goal of a middle income status  as underlined by some examples:

– The economy has recovered and picked momentum. It has grown at over 6% per annum over the last two years.

– Average incomes of Ugandans have increased.

– The quality of Uganda’s labour force has “dramatically improved”. We understand that the proportion of the labour force with tertiary education has increased from 7.5% in 2013 to 13.6% in 2017.

– Trade with the EAC partners has “significantly improved”, generating a surplus of $557m last year.

– Many new factories have been opened. The impact is that Ugandan products in supermarkets has increased from 15% to 45%. Here, the target it to reach 50% by the year 2020. 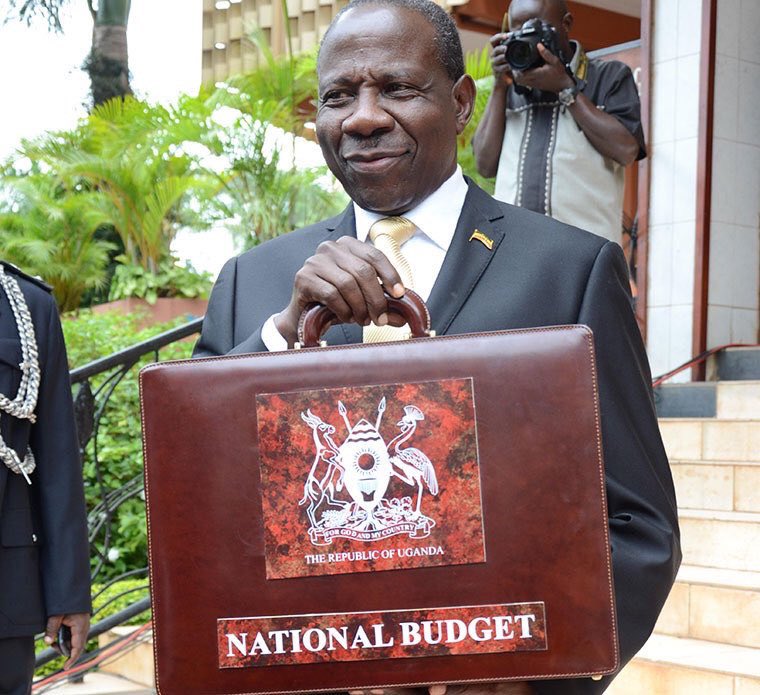 SERENA – “In accordance with Artical 155(1) of the 1995 Consistution of the Republic of Uganda and Section 13(13) of the Public Finance Management Act 2015, I presented the budget proposals for Financial Year 2019/20 to Parliament on March 28, 2019. I applaud honourable Members of Parliament for their dedication in the reviewing of the proposals and the approval of the budget on May 24, 2019,” he starts off.

He says that his statement presents the economic and development context under which the new fiscal year budget was prepared and highlight the priority actions that “underpin the allocations that have been appropriated by Parliament”.