BoU speaks out on Kasekende apology

KAMPALA – The Central Bank has Saturday June 15 distanced itself from an apology from a Facebook account in the names of Deputy Governor, Dr. Louis Kasekende.

The Bank of Uganda in a social media post says both Governor Emmanuel Tumusiime Mutebile and Dr. Kasekende do not currently operate personal social media accounts.

“We have notified the authorities about the misrepresentation,” the Bank of Uganda said in a statement.

The Central Bank was reacting to an apology from a social media account in the names of Dr Louis Kasekende, for “the shame” he said that the Central Bank has inflicted on the country.

The recent blunders by entrusted bank officials have ridiculed the bank’s integrity and attracted stinging criticism from financial-industry commentators and put the country’s economy at stake.

“We are very sorry for ashaming Bank of Uganda like this,” said the post in the names of Dr. Loius Kasekende, the deputy governor. 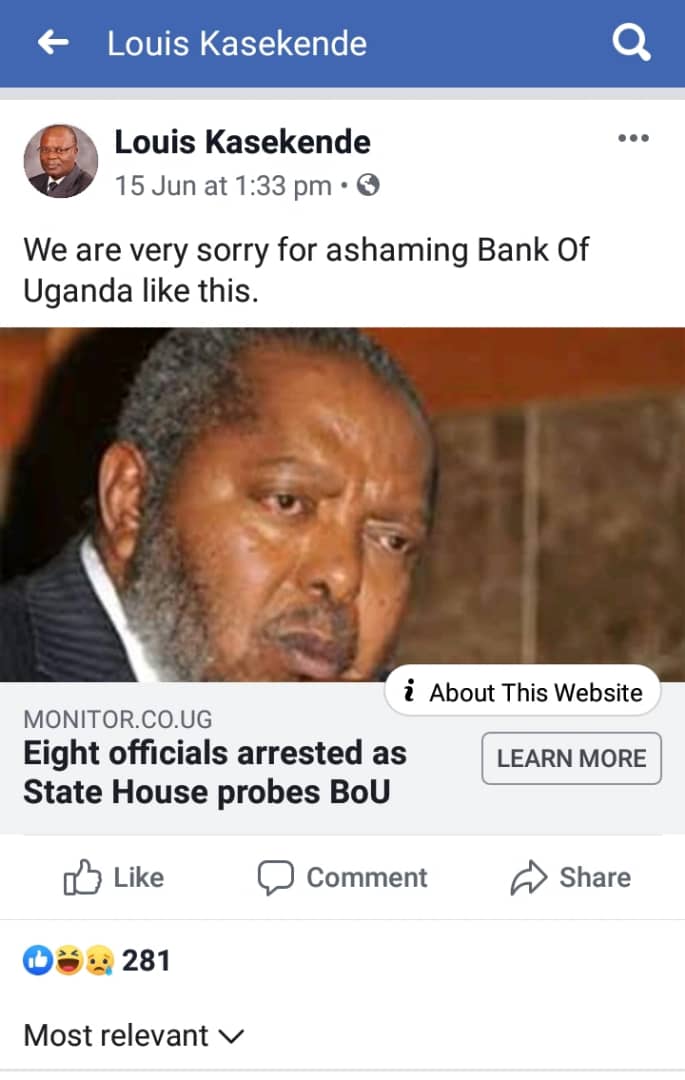 The post was in connection to the recent arrests made at Central Bank as the State House Anti-Corruption Unit moved in to investigate another mega scandal.

The Head of the Anti-Corruption Unit at State House Col. Edith Nakalema on Friday June 14 confirmed that a major investigation into the affairs of Bank of Uganda is underway,

She also revealed that it is actually the top-boss Bank Governor Emmanuel Tumusiime Mutebile who blew the whistle on the culprits.

In a statement, issued Friday June 14, Col. Nakalema also indicated that the investigation initiated by her team was looking into the conduct of a number of senior Central bank officials and those in the customs and Civil Aviation Authority (CAA) in relation to discrepancies in printing and transportation of some billions of Uganda shilling bills.

The Central Bank Governor Emmanuel Tumusiime Mutebile also confirmed that the bank is under criminal investigation following a voluntary invitation to the Anti-Corruption Unit at State House.

This followed a major anomaly which he said was discovered during the verification process of a consignment that the BoU received on 27 April, the Governor said.

In a statement dated June 14, 2019, Prof. Mutebile revealed that he blew the whistle to the Anti-Corruption Unit of the State House, headed by Lt. Col. Edith Nakalema to investigate the discrepancies in printing and transportation of some billions of Uganda shilling bills.