We have had enough! Mbarara University students strike demanding for lectures

MBARARA- Police, on Wednesday, May 8, spent the whole morning running battles with students of Mbarara University of Science and Technology who had staged demonstrations demanding for lectures and time table for exams.

At exactly 9 am students gathered at campus square started burning car tyres and later proceeded to the office of the Resident District Commissioner.

Chanting in unison, “we want lectures, how about our rights!”, some had placards reading, “Obua Must go.

Minutes later,  they settled at RDC’s building, police led by FFU Commander Collins Kaganzi came engaged them to leave but all efforts proved futile as they were demanding to talk to the RDC before they were tear gassed to disperse them in an effort to control their numbers which were increasing slowly.

A section of students proceed to Mbarara town but police managed to block them from descending to town to disrupt businesses. Students re-organized and went back to compass but were overpowered by police before they smashed window screens of some of the university cars which were still in the parking lot.

Their strike today came barely day after the district security committee had met in the RDC’s office to forge a way on finding the lasting solutions to the seemingly unstoppable impasse between academic staffs and the top management after the former laid down their tools on May 2, 2019.

The committee was to engage the administration and a section of members of the academic staffs last night but according to the sources privy to what transpired in the meeting that ended up to midnight, it did not yield any fruits of resolving the matters.

Students through their clerk to GRC in the office of the guild speaker issued a letter signed Iker Aggrey Akatwijuka(Clerk to GRC) calling for a peaceful demonstration since there has been consistent closure of the main university facilities which include the library, and lecture rooms which have denied them their right to education.

Students say that they don’t access their course work marks and yet final exams start on Monday.

“Students are unable to meet their supervisors for their research completion, some have already missed their exams that were scheduled this week and some had not completed their course units , that’s why we decided to have a peaceful demonstration but we were surprised to see police coming in to tear gas us” Aggrey Akatwijuka stated.

Police managed to arrest over six students but security officers led by RDC Lt. Col James Mwesigye were not given a chance to address them before they release their colleagues unconditionally. Mwesigye later called the DPC Murungi to have the six students who were arrested released and was allowed to speak to them.

While addressing students, RDC Mwesigye found a hard to calm down the angry students. He told students that they doing all that it take to engage the two factions to have the issues resolved.

“When the Monday meeting hit a snag, we continued to engage, last night we had a meeting with the two factions and there is a big hope that you will have your exams on Monday” Lt. Col Mwesigye said before he was booed down by students arguing that the exams should be extended since libraries have been closed and have not had any chance to revise.

“Our issues are that our time wasted be compensated, extend the time of exams for at least two weeks but not Monday or if all things fail let us go home as they sort themselves rather than remaining here,” One of the students responded to RDC.

“By the way, we have been with you from the start, so we are going to tell management that they should allow more time for you to do your exams, at least I have communicated these issues to the head of state all will be fine,” RDC Mwesigye said.

Students continued to ask the RDC to ensure they close the university and allow them go home before things get worse. “Our role is not to close but to see you learning and that’s what we are doing”

Mike Katongole the guild president who was leading the strike said that they have wasted a lot of money since the staffs went into strike. “we want the government to come in and help us study for us we don’t want to know the issues they have with the VC, let government come and close this university so that we go home, we had that the committee of parliament of education is coming tomorrow(Thursday) let them knowing that we are angry”

He later said that they have given them two hours ultimatum to gotten them an explanation or else they will resume from where they have stopped at 3 pm. 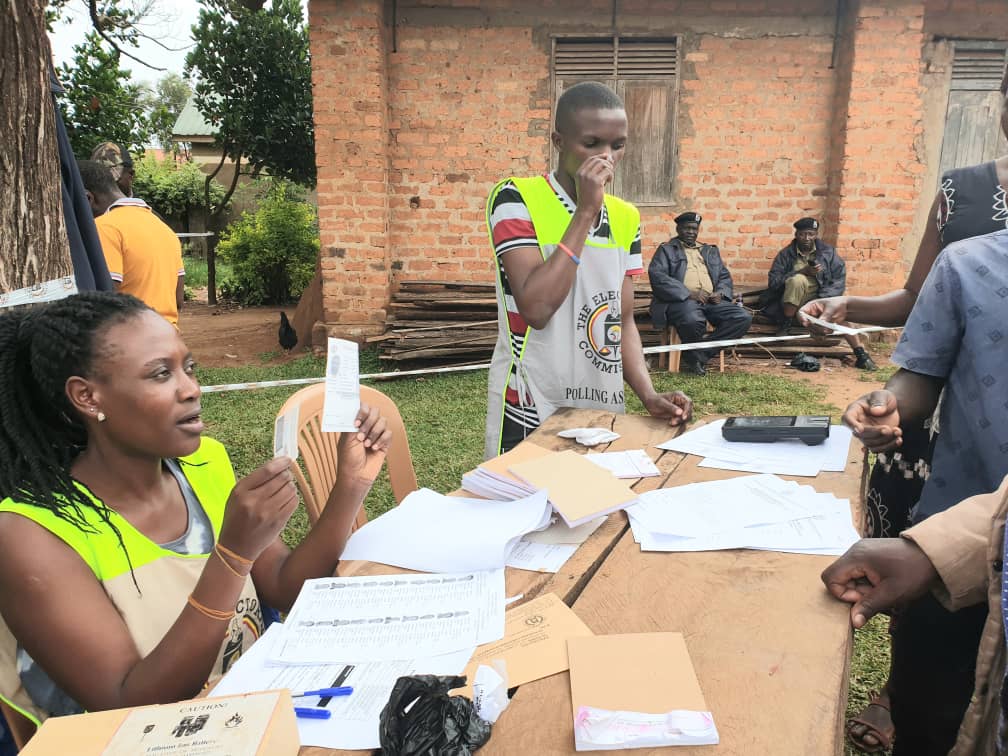 Election officials threaten to strike over non-payment of allowance