KAMPALA – The Central Executive Committee (CEC), the top decision making the organ of the ruling National Resistance Movement (NRM) party, has disowned a directive purportedly issued by President Yoweri Museveni on the recruitment of party cadres at village level ahead of the 2021 elections.

Describing the purported directive as an insult to the party leadership structure, CEC, in a strongly worded statement signed by eight party leaders, said the directive to recruit the cadres was not among the eight resolutions made in February at Chobe Safari Lodge in Murchison Falls Park.

“These have noted that the decision by President Museveni to recruit the said national Resistance Movement was never discussed during the said retreat and could not therefore been part of the seven strategic ‘Chobe Resolutions and which were consciously endorsed by all members in attendance,” the statement issued on Tuesday reads in part.

They warned the national chairman to desist from unsurpassing the powers of the organs of the party which creates confusion within the party.

As reported by this website on Sunday, the centre of the conflict is apparently the President’s decision to bypass the party Secretariat led by Justin Kasule Lumumba and use his office as the party chairman to recruit the cadres at village level to lead his wealth creation drive.

Frustrated by what he called procrastination and lack of commitment by his ministers and leaders at the Kyadondo-based NRM Secretariat, the President, in his capacity as the ruling party chairman, tasked his political assistant, Milly Babirye Babalanda, to identify three NRM cadres in each of the 65,200 villages across the country to spread the NRM gospel of wealth creation and promotion of other party programs.

Mr. Museveni is said to have made the directive during the February NRM meeting at Chobe Safari Lodge in Murchison Falls National Park in Nwoya District.

Ms. Babalanda and her team from the Kyambogo-based office are said to have embarked on the recruitment drive, informing NRM Kyadondo office as well.

However, Ms Lumumba is said to have been displeased by this move, which she views as undermining her position and vowed not to cooperate.

At the weekend, Mr Farouk Kirunda, a political assistant in the Office of the President, wrote to Esther Mbayo, the minister for the Presidency, expressing frustration over failure by RDCs to sanction the recruitment process of the cadres per village. Ms Mbayo supervises the RDCs.

But in response, Ms Lumumba hit back in a strongly worded letter, denying knowledge of any such directive from the President.

“My attention has been drawn to concerns being variously raised by the National Resistance Movement structures at all levels, in respect to an ongoing countrywide identification and recruitment of three (3) NRM cadres per village, to undertake a specific assignment portfolio,” her letter reads in part.

“I have noted with equal concern the unequivocal sentiments being aired by the National Resistance Movement structures and the ensuing discussions in various social media platforms in respect to the above-mentioned recruitment; and I would like to guide as follows:  THAT there is no formal decision or directive of any Organ of the National Resistance Movement made specifically to identify and/or recruit the three (3) cadres per village; as is being implied in some of the social media platforms mentioned above,” she adds. 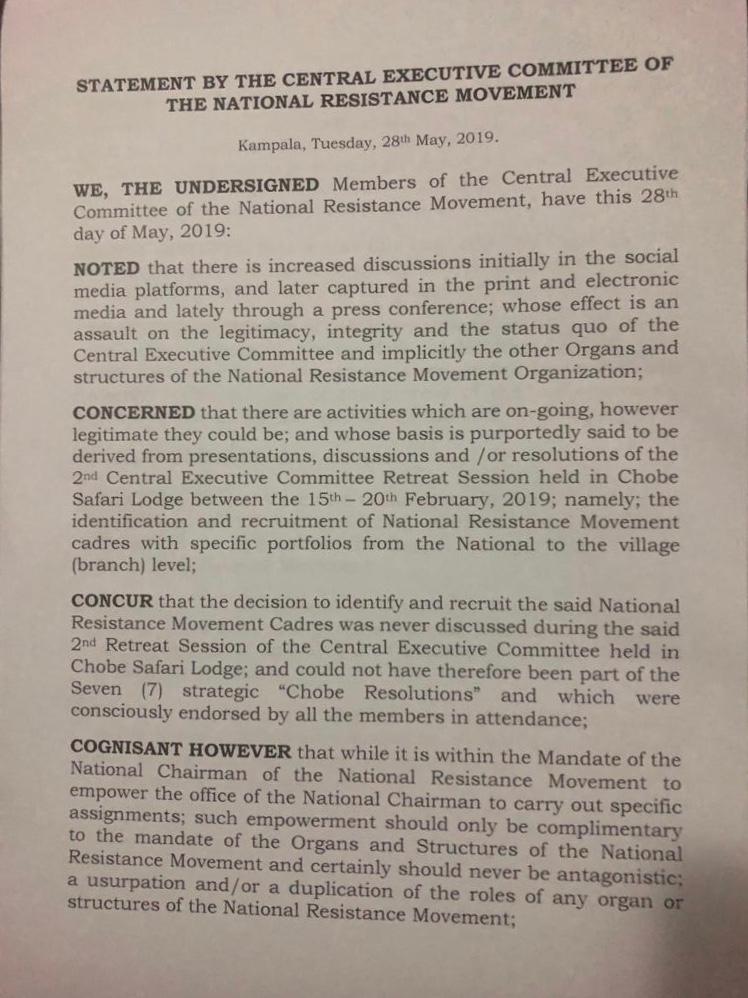 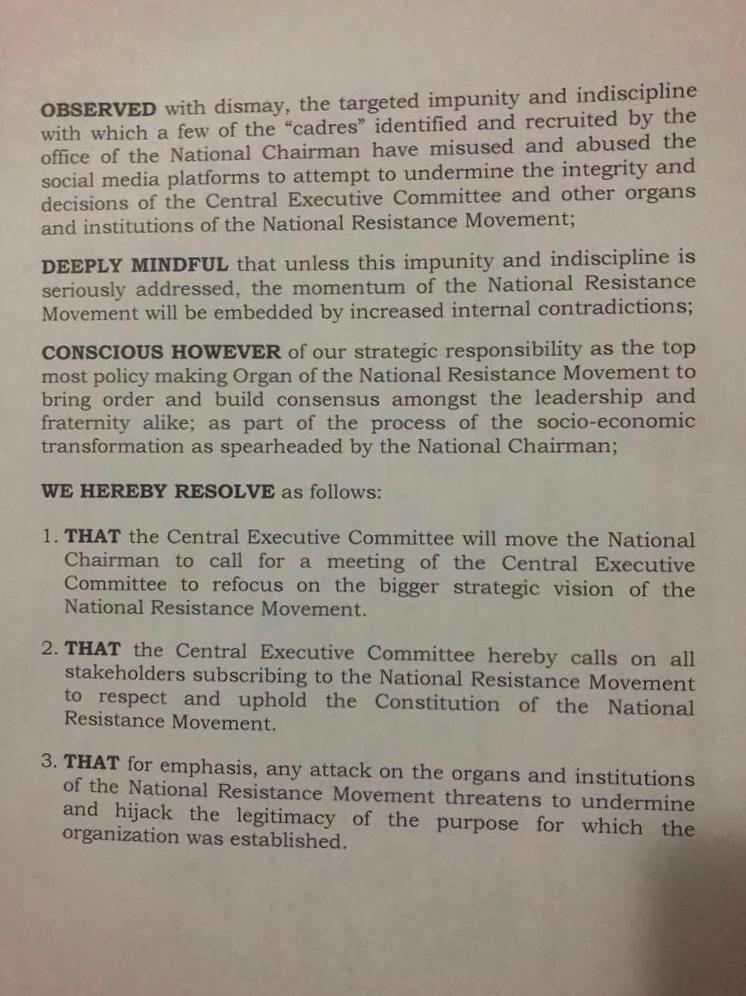 “THAT as the custodian of the minutes of Organs of the National Resistance Movement, inclusive of the Central Executive Committee meetings, I can state with no fear of contradiction, that the above recruitment drive is certainly not part of the 7-point Chobe Resolutions. THATI request that the NRM Structures and the NRM fraternity at large should remain focused on our political mobilization and sensitization as guided by the Road Map that I recently released. The NRM National Secretariat will continue channelling all official communication through the established mobilization structures with specific focus being on the 30 – member village committees at the various levels.’

However, sources from the Kyambogo-based office told this website on Saturday evening that their recruitment process was cleared by the Internal Security Organization (ISO) led by Frank Bagyenda, implying that the President sanctioned it.

Highly placed State House sources said the President is so far impressed by what the Babalanda team has so far done in mobilising NRM party leaders at village level yet without demanding a lot of money.

It is not immediately clear how this ongoing rift will antagonize the party ahead of the 2021 elections.

Sources close to the President told this website that the Head of State is increasingly frustrated by the bureaucracy of his formal party structures that he is ready to bypass them and use his own office to mobilize in order to counter the Bobi Wine effect across the country.

In 2016, it should be remembered that the President used his office in Mbuya marshalled by his current assistant, Molly Kamukama, to manage his campaigns.

The President is reportedly tired of the Secretariat which he said always demands colossal sums of money from him when tasked with party projects.

“They come with wonderful proposals which in the end recommend release of billions of shillings for implementation. The idea is always is extort money from me without being mindful of the money that has already been allocated in the different government programs to create wealth for our people,” Museveni is quoted as saying.