Colonel Oguna takes over from Mr Eric Kiraithe who has been serving in the position since August 2018.

In a press release signed by Mr Mucheru, Col (Rtd) Oguna takes over the position with “immediate effect.”

In more changes, Mr Mucheru also announced that the office of the government spokesperson shall be “domiciled at the Ministry of Information, Communications and Technology.”

“Colonel (Rtd) Oguna shall have oversight over all Government of Kenya communications channels under the Ministry of ICT. These include; Directorate of Information and all County and Sub-county information officers, Department of Public communication and all the officers seconded to various ministries and government agencies, National Government Communication centre and the Government media centre,” read part of the statement.

In addition to the above roles, he will also have an oversight role over the two government news gathering and dissemination channels- Kenya News Agency and MyGov.

Before being appointed to the position, Col (Rtd) Oguna served as a Joint National and Resources Mapping Project spokesperson.

“Before this, he served as Defense Advisor/ Attaché at Kenya’s High Commission in the United Republic of Tanzania between 2014 and 2017.

Col (Rtd) Oguna is well known for his role as the in-charge of Kenya Defense Force (KDF) Public Affairs office and Spokesman for KDF at the onset of Kenya’s Operation Linda Nchi, a position he held between 2011-2013. 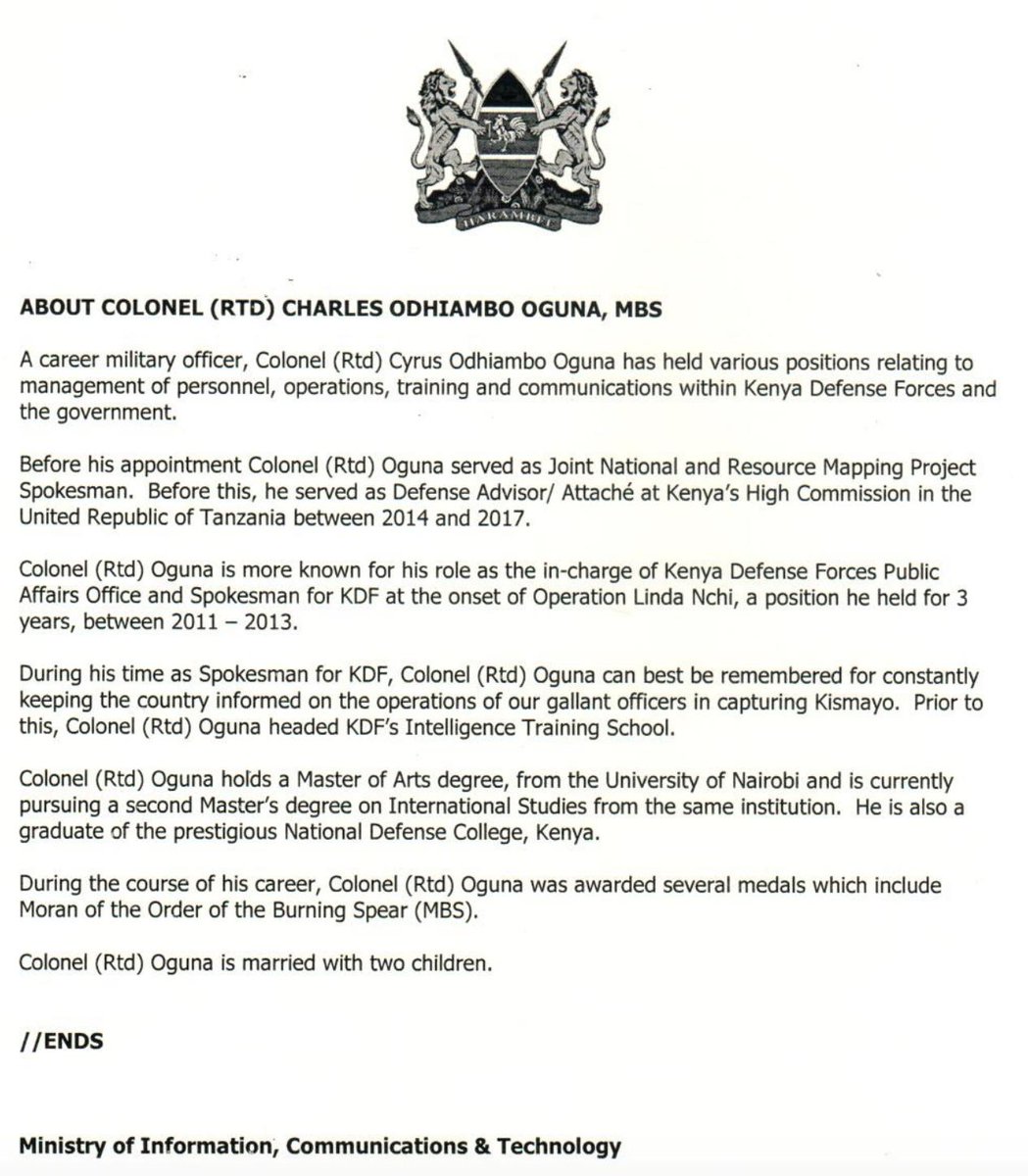 “During his time as Spokesperson for Kenya’s army, KDF, Col. (Rtd) Oguna can be remembered for constantly keeping the country informed on the operations of our gallant officers in capturing Kismayo. Prior to this, Colonel (Rtd) Oguna headed KDF intelligence Training School,” read the press release.

The new appointee holds a Master of Arts degree, from the University of Nairobi and is currently pursuing a second Master’s degree in International Studies from the same institution.

A graduate of Kenya’s prestigious National Defence College, Col (Rtd) Oguna was awarded several medals which include Moran of the Order of the Burning Spear.