KAMPALA – The Director of Public Prosecutions (DPP), Mike Chibita, has withdrawn corruption charges against Assistant Commissioner of Police (ACP) Siraje Bakaleke who has been on the run since last year.

The revelation in contained in a letter written and signed by Justice Chibita on May 24, 2019 discounting proceedings against Bakaleke and eight of his co-accused. 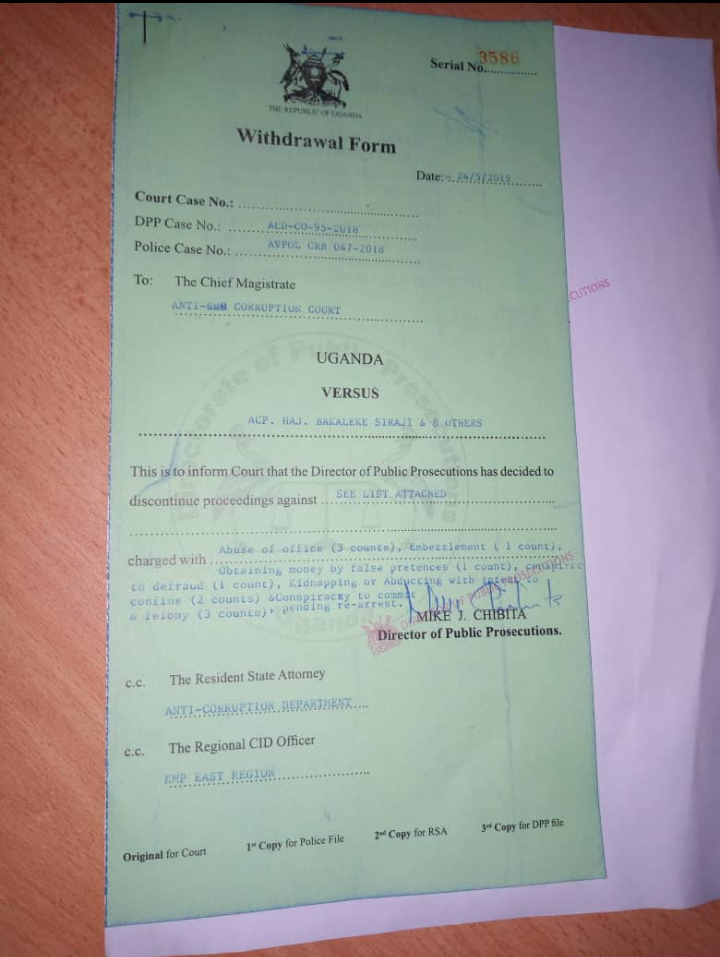 ACP Bakaleke has been wanted by the Anti-Corruption Division of the High Court for “offences of abuse of office, conspiracy to defraud and kidnapping with intent to confine a person…”

He has been facing the charges with six other police officers who include; D/ASP Innocent Munezero, D/ASP Nuwagaba Innocent, D/AIP Robert Asiimwe, PC Amanya Junior, PC Babu Gastavas and PC Kenneth Zirintuusa accusing them of having arbitrarily directed the wrongful arrest and confinement of 3 Korean nationals.

They were jointly charged with a one Mugoya Wanyoto Paul and Nabeta Samuel with whom they defrauded the Koreans of 415,000 US Dollars between February 4 and 11 this year.

The prosecution further alleges that on February 4 and 11 this year in Kampala, the nine accused persons conspired to kidnap the three Koreans with an intention to secretly or wrongfully confine and defraud them of 415,000USDollars.

The state prosecutor attached to the Anti-Corruption division of the High Court, Ms Harriet Angom, on Monday presented the DPP’s letter before Grade one magistrate Moses Nabende.