KAMPALA – The Uganda Communications Commission (UCC) has agreed to meet with the broadcasters association, in the aftermath of the fallout following live coverage of budding opposition figure and Kyadondo East legislator Robert Kyagulanyi aka Bobi Wine.

The UCC Executive Director Mr Godfrey Mutabazi, has in a Friday May 3, letter seen by this website agreed to meet the broadcasters under the umbrella body, the National Association of Broadcasters (NAB) next week on Tuesday.

“Reference is made to the above captioned subject and your letter dated 2nd May in which you requested for a meeting with UCC,” Mr. Mutabazi wrote  to NAB Chairman, NBS Television proprietor Mr. Kin Kariisa.

“The Commission agrees to meet the executive members of NAB and hereby invites you for the meeting on Tuesday 7 may and 10:00 am at UCC house in Bugolobi,” adds the letter. 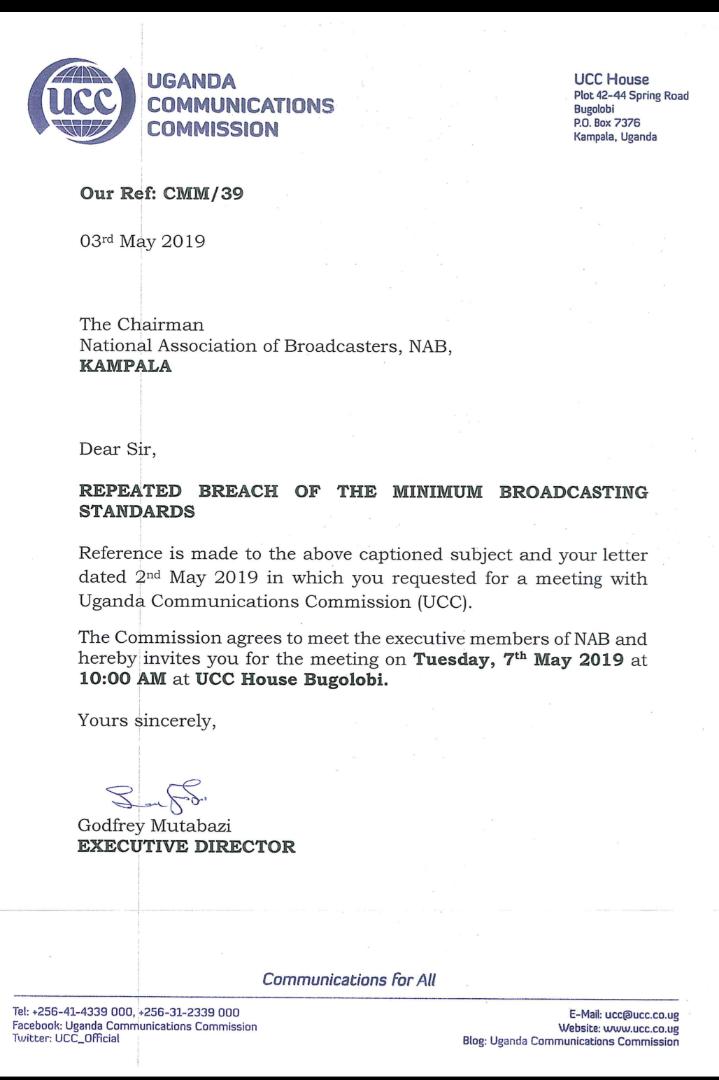 The meeting comes after the broadcasters rejected a directive from the regulator, telling them to suspend top editors over live broadcast of political events surrounding activities of Kyadondo East legislator Robert Kyagulanyi aka Bobi Wine.

UCC early this week ordered for the suspension of 39 top producers, heads of programming and heads of news at various media houses including NBS Television and NTV Uganda among others citing a breach of minimum broadcasting standards.

The NAB has however, slammed the Commission for unfair directive saying it is intended to stifle free and fair coverage of all news content, on top of targeting some individual media practitioners.
NAB Chairman Kin Kariisa, rejected the demands and instead suggested for a meeting with the regulator. 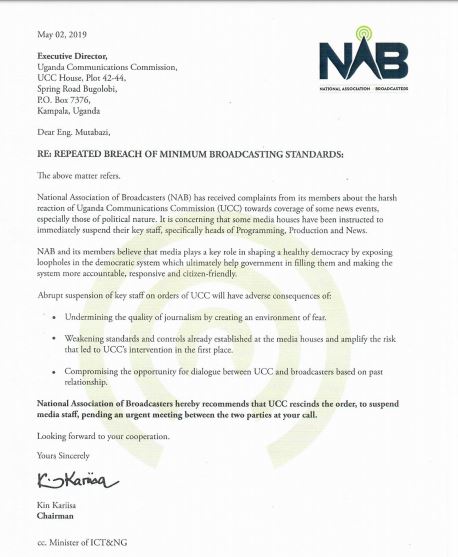 Mr. Kariisa in a statement Thursday, May 2, noted that NAB believes media plays a key role in shaping a healthy democracy by exposing loopholes in the democratic system which ultimately helps government in filling them and making the system more accountable, responsive and citizen-friendly.

He stressed that the abrupt suspension of key staff on orders of UCC will have adverse consequences including undermining the quality of journalism by creating an environment of fear and weakening standards and controls already established at the media houses and amplify the risk that led to UCC’s intervention in the first place.