Then why do you always contest? Bobi Wine hits at Besigye, insists ballot can remove Museveni

KAMPALA – Kyadondo East MP Robert Kyagulanyi aka Bobi Wine has insisted that President Museveni can be defeated through the ballot, dismissing Dr Kizza Besigye’s assertions that this is not possible.

“For a leader to say a vote can never oust Museveni without offering a solution is disappointing. We believe in democracy and it should not depend on us but on people. What politicians cannot solve, the people of Uganda can solve, they should continue to register as voters and be many,” Bobi Wine said in reference to Dr Besigye’s recent claims that the national identity card alone cannot dislodge Museveni from power.

Bobi Wine has been urging his supporters to register and acquire the National ID, insisting that it will be the tool that will oust Museveni from power come 2021. However, FDC party and Dr Besigye have been insisting that this will not work.

But Bobi Wine said that this has worked in the past, giving examples of his massive win in Kyandondo constituency, Jinja East, Bugiri and Arua Municipality urging that the power of the people will prevail in 2021.

“Don’t talk about democracy and stand four times and on the fifth time you say it doesn’t work, we believe it works,” he added amid applaud.

Bobi Wine also asked opposition political leaders not to waste more time in fighting one another.

“We must either work together and survive or perish together as fools, you know that this force is for all Ugandans not leaders only,” he said.

DP president Nobert Mao said: “Some people are giving up, saying this man (President Museveni) can only be removed by God. I want to assure you, God’s work on earth is done by men and women.

Former FDC president Maj Gen (Rtd) Mugisha Muntu, who was invited to the event, said: “It is good that you (DP Bloc) have this slogan saying unity is the only option we have. We (Alliance for National Transformation) believe in that as well.

Gen Muntu said that as people who have been struggling for justice and democracy which is the principle of good governance for this country, one thing that has eluded them since independence is unity.

“When we look on what we have gone through, conflicts and bloodshed, the current situation that we are involved in always lacked united effort of all people who believe in those values and it’s unfortunate that we are still failing to build it and become the foundation of good governance in this country,” He said

Dr Bwanika: “I am not sure I like Mao or Kyagulanyi but I am going to work with them, it is the right thing to do.”

In response, Bobi Wine said: “I agree, We don’t have to like each other in order to work together, I also don’t like Dr. Bwanika but there is no option.” 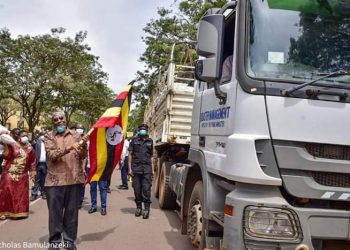