KHARTOUM – Thousands of demonstrators across Sudan have taken part in what appears to be the biggest series of rallies against President Omar al-Bashir since protests began in December last year.

In Khartoum, demonstrators reached the army headquarters for the first time. The presidential compound is nearby.

The rallies mark the 34th anniversary of the coup that overthrew the regime of former President Jaafar Nimeiri.

So far, the army has not intervened in the protests.

Demonstrators remained outside the compound in the evening after authorities pulled back, as organisers reportedly called on protesters to hold a sit-in to keep up the pressure.

Some reportedly vowed to stay until President Bashir resigned.

Sudan’s information minister meanwhile reaffirmed the government’s plan to resolve the crisis through talks and praised the security forces.

Police told the state news service Suna that one civilian – who protest organisers reportedly said was a medic – had died in Khartoum’s sister city Omdurman.

Why are people protesting?

Journalist Mohamed Ali Fazari, who was at the scene in Khartoum, told BBC that protesters were urging the army to side with the people against the government.

The protests were originally sparked by a hike in the cost of living but are now calling for the president, who has been in power for nearly 30 years, to step down.

Sudan’s economy has long been strained since the US imposed sanctions more than 20 years ago, accusing Khartoum of sponsoring terror groups. 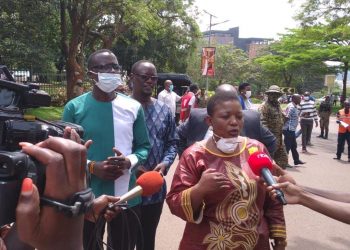