PARLIAMENT – The Speaker of Parliament, Rebecca Kadaga has Friday afternoon launched a website at Parliament as part of preparations for Uganda to host the annual Commonwealth Parliamentary Conference (CPC) in September this year.

As her first order of business since returning to work following over a month of sick leave, Ms Kadaga said Uganda hosting the conference will boost the country’s tourism.

She decried the recent incidence when an American tourist Kimberly Endicott and her driver Jean-Paul Mirenge were kidnapped from Queen Elizabeth National Park on April 4. “It is a blight on our side but I reassure you that the country is safe. If we continue to drum the message that the country is safe, they [tourists] will surely come”, she said, adding that the conference is a big marketing opportunity for Uganda. 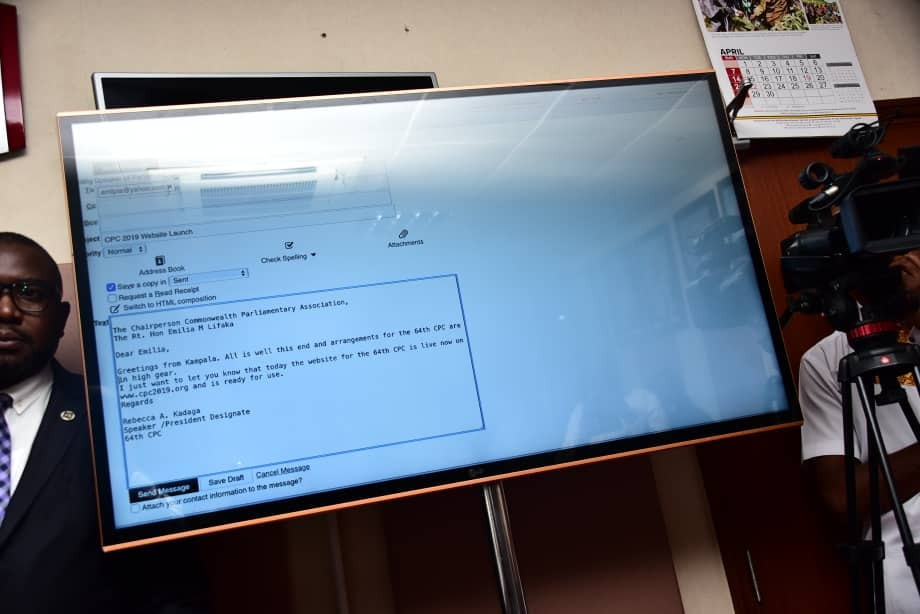 The CPC is one of the largest annual gatherings of Commonwealth Parliamentarians. The 64th conference will take place from 22 to 29 September 2019 hosted by the CPA Uganda Branch and the Parliament of Uganda.

Ms Kadaga as the CPA President Designate (2018-2019), will host more than 500 Parliamentarians, parliamentary staff and decision makers from across the Commonwealth for the main conference under the theme: ‘Adaptation, engagement, and evolution of parliaments in a rapidly changing Commonwealth’.

The conference, among others, offers networking opportunities and the prospect of the coming together of the CPA’s global membership of Parliamentarians and Parliamentary staff to address the critical issues facing today’s Parliaments.

According to the CPC website, there is an ever-increasing focus on greater scrutiny of Parliamentarians and the overall public trust deficit in Parliaments. As such, the CPA’s annual conference will offer the opportunity for Members to benefit from professional development, supportive learning and the sharing of best practice with colleagues from Commonwealth Parliaments together with the participation of leading international organisations.

During the 64th Commonwealth Parliamentary Conference, there will also be a number of additional conferences and meetings including 37th CPA Small Branches Conference; 6th triennial Commonwealth Women Parliamentarians (CWP) Conference; 64th CPA General Assembly; meetings of the CPA Executive Committee; and the Society of Clerks at the Table (SOCATT) meetings.

The conference will hold elections for the Chairperson of the Commonwealth Women Parliamentarians (CWP), the CPA Treasurer and the CPA Small Branches Chairperson for new three-year terms.

The CPA is an international community of around 180 Commonwealth Parliaments and Legislatures working together to deepen the Commonwealth’s commitment to the highest standards of democratic governance and the organisation was founded in 1911. Uganda last hosted the CPA in 1967.