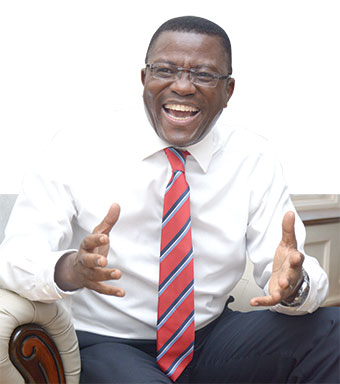 Katikiro of Buganda Charles Peter Mayiga has come out to defend his Prince Wassaja after being criticised for being involved in the recent boat cruise tragedy. (FILE PHOTO)

KAMPALA– The Katikkiro of Buganda, Mr Charles Peter Mayiga, has lashed at critics of Prince David Wassajja and other kingdom officials for being part of the boat cruise that claimed 32 lives in Lake Victoria on November 24.

Many kingdom loyalists have launched a scathing attack on Prince Wassajja and other kingdom officials in their 50s for being involved in what described as parties meant for youth.

But addressing the Lukiiko on Monday, Mr Mayiga said no matter the age and status, all human beings need entertainment.

He said the boat cruise tragedy was an accident like others and that it is wrong to criticize the victims.

“All of you use boda-bodas without helmets. You drive without helmets or while drunk. All such (behavior) is same as sailing without a life jacket. We see respectable individuals detained after drink driving. You have no difference from a reveler dancing on a cruise boat. Speaking as if they are angels, abusing people….we all need to be cautious,” Mr Mayiga said.

Nevertheless, he insisted that it is not proper for individuals to spend all their time on entertainment.  “Don’t waste all time happening. You can’t happen all the time no matter on lakes or other places. Spending all life happening is not proper, he added.

He outlined five key policy proposals to regulate water transport such as checking the condition of all boats, especially those which carry more than ten passengers, licensing boat operators, regulating passengers on boats, ensuring wearing life jackets for every passenger in conformity with one’s weight, installing communication control centres for all boats like the case in aircrafts, creating sail routes and standardizing piers.

On Monday, police revealed that Prince Wasajja has been questioned over the accident on Lake Victoria.

Addressing journalists in Kampala on Monday, Police spokesperson Emilian Kayima said Prince Wasajja, who was allegedly the organizer of the boat cruise, was quizzed alongside other survivors to give their side of the story in connection to allegations that the boat was in bad mechanical condition.

“We interviewed survivors, including Prince Wasajja. We also recorded statements from our marine officers who were at the scene to understand what happened before the boat set off but they have not been arrested,” Mr Kayima said.

The ill-fated boat is said to have been carrying over 100 revellers, beyond its capacity.