KAMPALA – Queries are being raised after the African Development Bank, Uganda Office decided to give a no objection to C.M.C Ravenna, a firm declared insolvent in Italy to construct the Busega-Mpigi Expressway.

C.M.C Ravenna is in a joint venture with Advent Construction Ltd from Tanzania for the now controversial Shs 500 billion road tender, but the Public Procurement and Disposal of Public Assets Authority (PPDA) had earlier issued a damning dossier on the procurement process, raising a red flag over the tender.

According to the report dated November 8th, 2018 and addressed to the Inspector General of Government (IGG), UNRA and African Development Bank (ADB-the financiers of the project), the procurement body accuses UNRA of trying to award the Shs 500bn expressway contract to a fraudulent company.

The company (best-evaluated bidder) C.M.C Ravenna, was a few weeks ago declared insolvent by an Italian jury seating in Ravenna while it’s Tanzanian partner Advent Construction Ltd has no background in Road construction but mainly specialises in buildings. 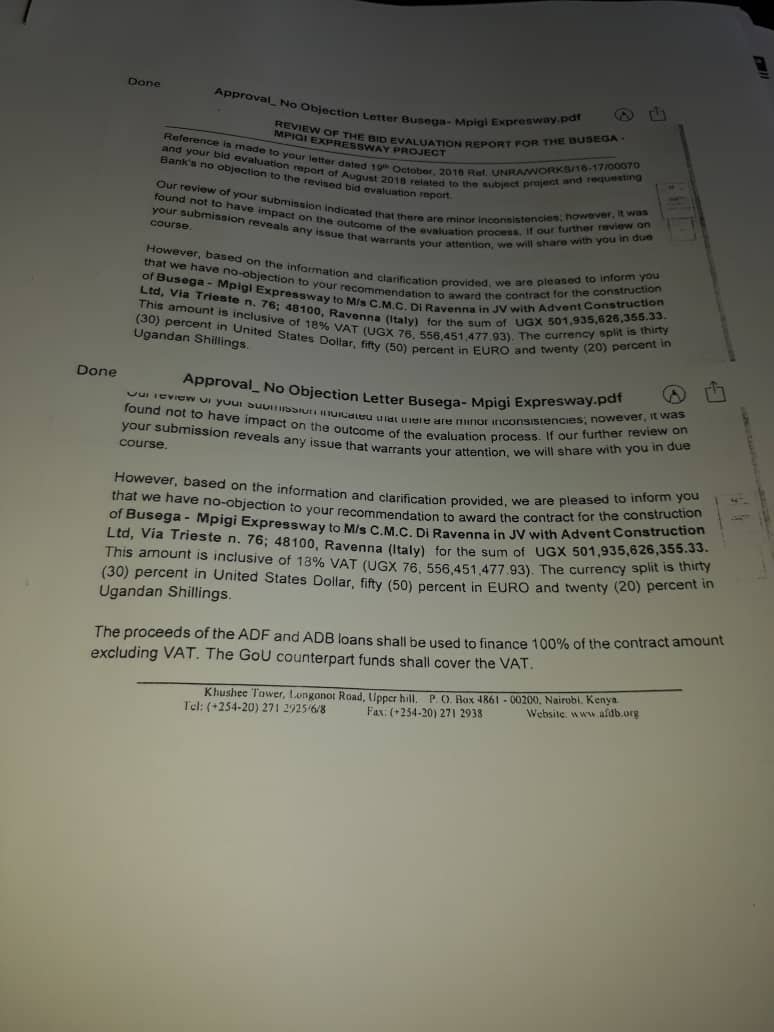 The African Development Bank [ADB] @AfDB_Group has granted a No Objection to award the Contract for the Construction of the Busega-Mpigi Expressway to CMC Di Ravenna in joint venture w/ Advent Construction Ltd [Italy] following a review of UNRA’s recommendations. pic.twitter.com/bVqFVSmTKY

“The bid evaluation report was approved by the UNRA contracts committee and has been submitted to the ADB for a No objection prior to displaying of the Notice of the Best Evaluated Bidder. In light of the above, we are requesting that your review of the procurement process be stalled until we get a response from the Bank such that your view also takes into account the Bank’s position and guidance on the matter.”