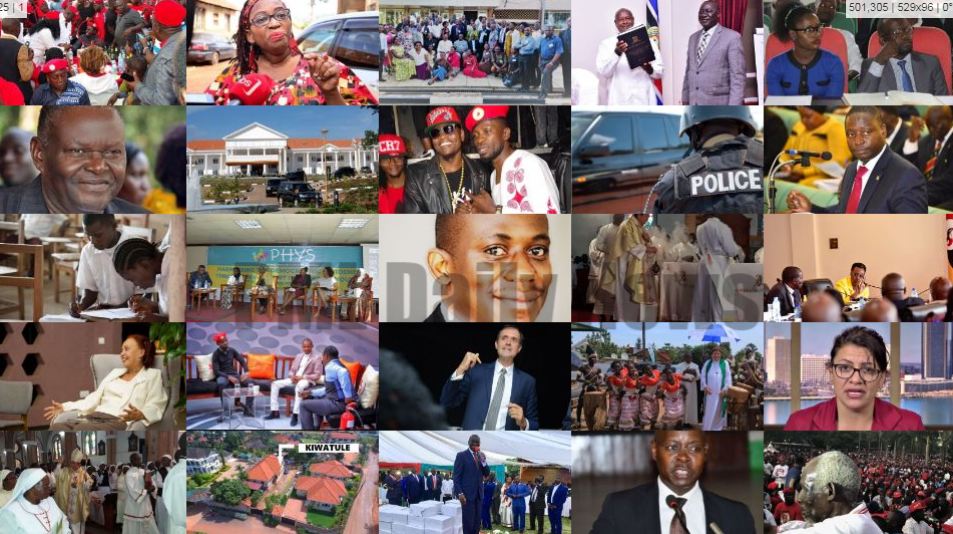 KAMPALA– Whoever thought the Kyarenga album launch had hit a snag after Namboole administration failed to host it, was wrong.

Social media pundits are already labelling Kyarenga the concert of the decade, after a boisterous crowd of hundreds of thousands of Bobi Wine supporters – many adorned in red, the colour of political protest in Uganda filled Busabala to capacity making the concert a huge success.

All these went on in a large security presence around the venue.

At sunset, following a rendition of the national anthem, Bobi Wine took to stage amid deafening cheers and chants of “people power, our power” from the energised crowd.

The crowds sang along to each and every song amidst tight security and such a thrilling atmosphere.

Later on, the ‘Ghetto president’ shared a video captioned, “If you decide to love me…..#KyarengaBusabala. We are the #peoplepower.”

What a day, What a Night, What a Show! THANK YOU to the tens of thousands of friends, supporters and fans who came down to One Love Beach Busabala last night for the #KyarengaConcert. pic.twitter.com/vTAzAB50xm

The concert remained a success despite the fact that some of the foreign invited guests including Kenya’s Embakasi East MP Babu Owino were banned from visiting Uganda.

In a letter seen by PML Daily, the Minister of Internal Affairs Gen Jeje Odongo asked Kenyan authority to halt the MP Owino as he is declared a persona non grata in Uganda.

Bobi Wine is yet to make any official statement on the matter and the success of Kyarenga. However, PML Daily team will bring you details of his official communication any time soon.

But also earlier the same week, while appearing at a local Television station Bobi Wine hinted that he has his eyes on the country’s top seat (Presidency) and will not be pulled back by stories of those who have previously failed to beat President Museveni at the ballot.

The musician turned politician said the People Power movement where he is the patron will not only go for the presidency but all elective positions across the country.

The media reports indicate that the national dialogue spearheaded by Elders Forum of Uganda and Interreligious council of Uganda that was planned to kick off on November 21, has hit a snag.

This is after Deputy Attorney General Mwesigwa Rukutana pulled the plug on preparations.

PML Daily has learnt Mr Rukutana told a meeting of the organizers that the government is opposed to the dialogue.

Mr Rukutana is said to have argued that the planned dialogue cannot proceed while at the same time preparations for the next election cycle have started because the country will soon get taken up by politicking.

He reportedly told the meeting that they can only hold the national dialogue before the Electoral Commission (EC) releases the roadmap for the 2021 election cycle. But the EC has already indicated that it will release the election roadmap before the end of this month.

The dialogue that the organisers envisaged, however, would take many months, maybe even more than a year.

However, organiser Maggie Kigozi of the elder’s forum said the dialogue is still on as scheduled. This is still a developing story and PML Daily team is following up the matter seriously and will avail more information as the story develops.

Meanwhile, a new biometric verification exercise conducted by Office of the Prime Minister (OPM) and the UN High Commissioner for Refugees (UNHCR) confirmed that a total number of 352,643 ‘ghost refugees’ existed on the roster for over two years.

The revelation has since created furious online discussions with many wondering on what will be done to concerned officials and who will crack the whip on where the resources accounted to them went? However, European envoys demanded to know how the money was spent.

The verification also confirmed that Uganda is host to over 1.1 million refugees, by far the largest number in Africa and the third largest worldwide.

However, Mobile Money users will have to wait a little longer for the reduction of the Mobile Money tax from 1% to 0.5% on withdrawals to take effect as bill has to first be published in Uganda Gazette.

“The President assented to the Bill within the specified law so the President was within the period that is specified in the law,” State finance minister Mr Bahati said, adding that telecom companies will reduce the charges from 1 percent to 0.5 percent on withdrawals only when the Act is published in the Uganda Gazette.

However, it’s not clear when the said Uganda Gazette will be published. PML Daily understands that Uganda Printing and Publishing Corporation is responsible for the publishing of the Gazette.

Gazetting is the official publicizing of law or other material by the state in its government gazette.

PML Daily team will bring you 369? coverage of events as they unfold on the matter.

“Police should complete investigations in the shortest time possible and also bring President Museveni to face court and explain how he was offended by my posts,” she said in court.

This was after the state brought an amended charge sheet to the court presided over by Gladys Kamasanyu. Dr Nyanzi denied the charges. She did not ask for bail as was hoped and was further remanded to Luzira Prison until November 22 when she will appear in court for further mention.

“The rest of us press ‘block’ when we are offended. Why doesn’t [Museveni] try the same? It’s excessive to lock up someone for an offensive post,” Byanyima tweeted on Saturday morning.

“If everyone who insults another person was jailed, how many Ugandans would be out working? How many prisons would we need? What Stella [Nyanzi] writes on SM may be offensive, vulgar, shocking, irritating to you. Press ‘Block’. #FreedomOfExpression,” Byanyima noted on Twitter.

In other news, a few months ago, embattled Bebe Cool suspended his public performances after angry fans threw bottles at him while on stage at Swangz All-Star Concert at Cricket Oval, Lugogo in August this year.

He later went on a self-imposed exile in the USA.

The singer, however, has hinted that he will be back on stage this festive season.

CONFIRMED! Schools to re-open for candidates, finalists on October 15

BREAKING! Sports given green-light to resume