KAMPALA -Ex-police chief Gen. Kale Kayihura’s lawyers have put the Vision Group on notice over “defamatory stories” linking him to the death of his former ally AIGP Andrew Felix Kaweesi.

Kayihura wants New Vision to immediately cease publication of Kaweesi murder series, issue an apology and pay him at least 300M for each story or they face legal action.

Gen Kayihura, in a November 2 letter through his lawyers, Kampala Associated Advocates (KAA), he claims all the published stories by the same paper are aimed at tarnishing his name and that he has taken note of deliberate and sustained campaign that is “riddled with publishing false, malicious and defamatory articles” against him.

This comes hours after another local daily, the Daily Monitor reported that Kayihura could be exonerated of all the charges including arming criminal gangs in the city.

Other charges against Kayihura, include failure to supervise and ensure accountability for the arms and ammunition issued to specialized units under his office as the IGP, including the Flying Squad, Special Operations Unit, witness protection unit and the Crime Intelligence Directorate of the police force.

Although, the army leadership is yet to confirm the reports carried by Daily Monitor. However, could the reports be true, New Vision will be in a difficult position given the looming legal actions.

New Vision in a number of stories claims Kayihura is guilty of a number of heinous crimes including the brutal murder of former Police spokesperson AIGP Felix Kaweesi in March last year.

PML Daily understands the case claimed by New Vision is not on Kayihura charge sheet.

The legal notice to New Vision also seen by this website indicates, “You have published these insinuations with malice and in full knowledge that the allegations are false.”

The lawyers accuse the New Vision of continuously spreading malice on Kayihura even when he was in army custody in Makindye early this year.

The New Vision, the lawyers say, reported that witnesses clearly stated in a lead story on October 9, how they [Witnesses] had been coerced to accuse Gen Kayihura and fabricate evidence against him.

In the said story, the New Vision wrote that it had obtained a joint security report entitled, Report into the allegations of involvement of security personnel into the murder of late AIGP Andrew Kaweesi, his driver and bodyguard.” 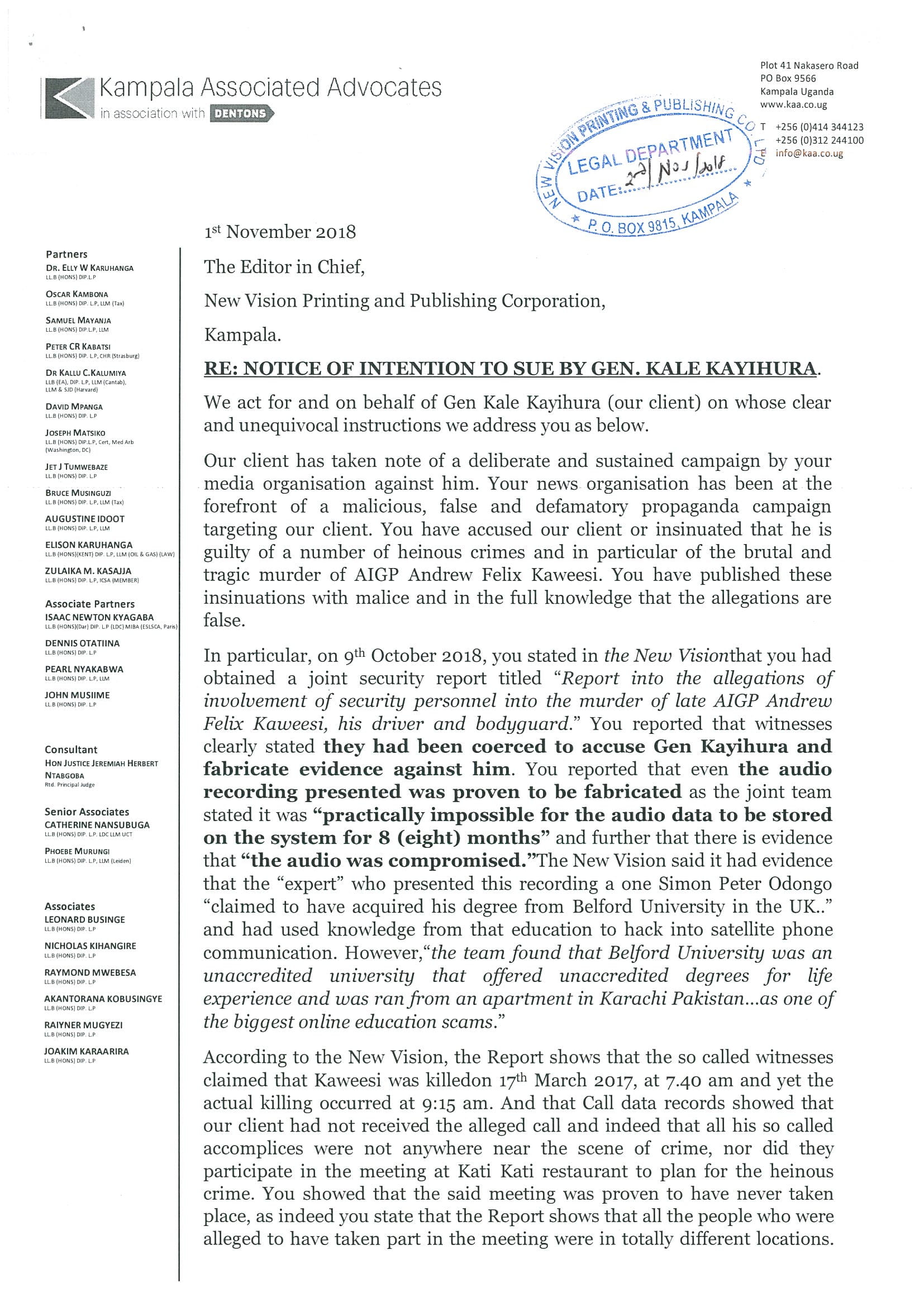 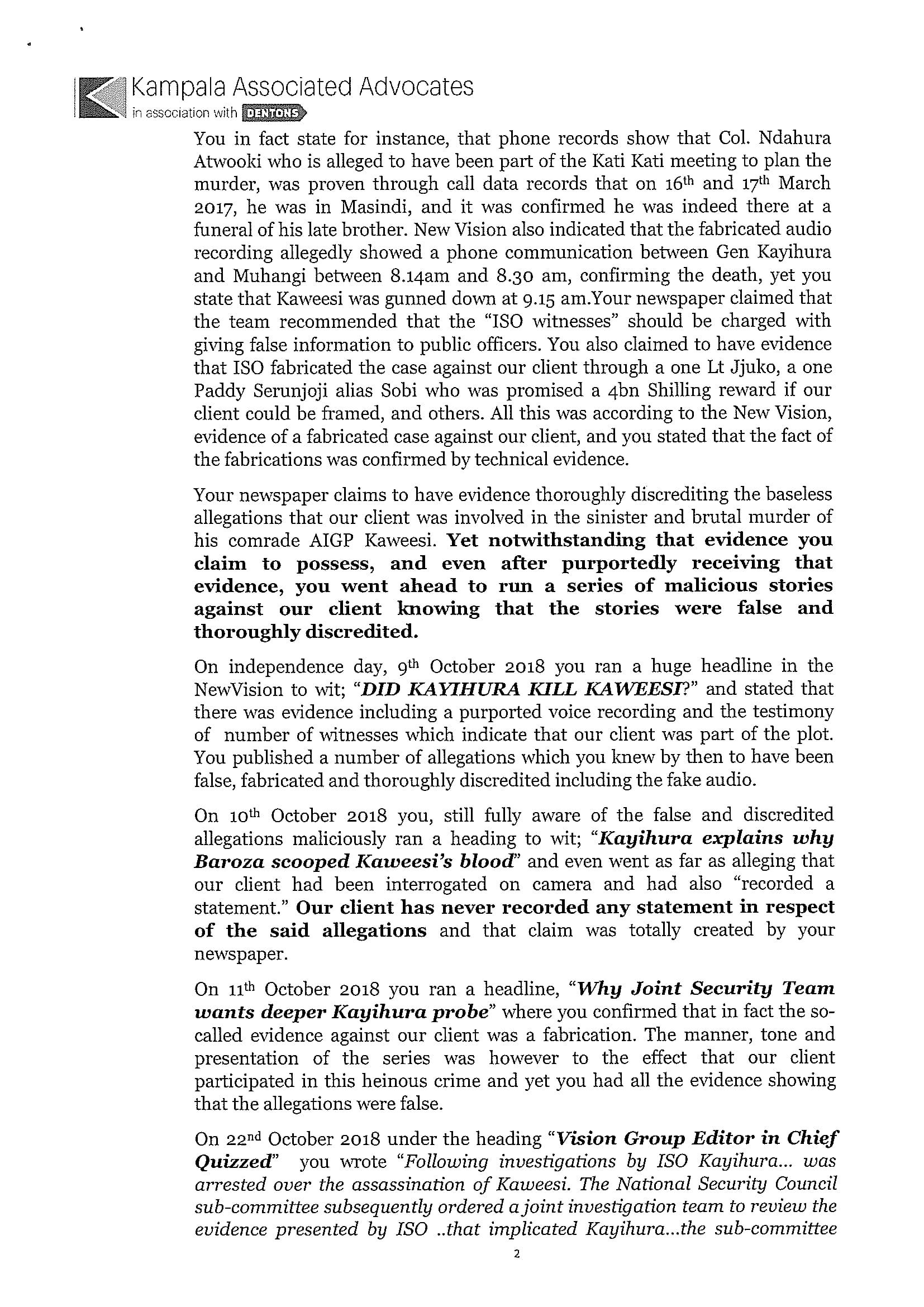 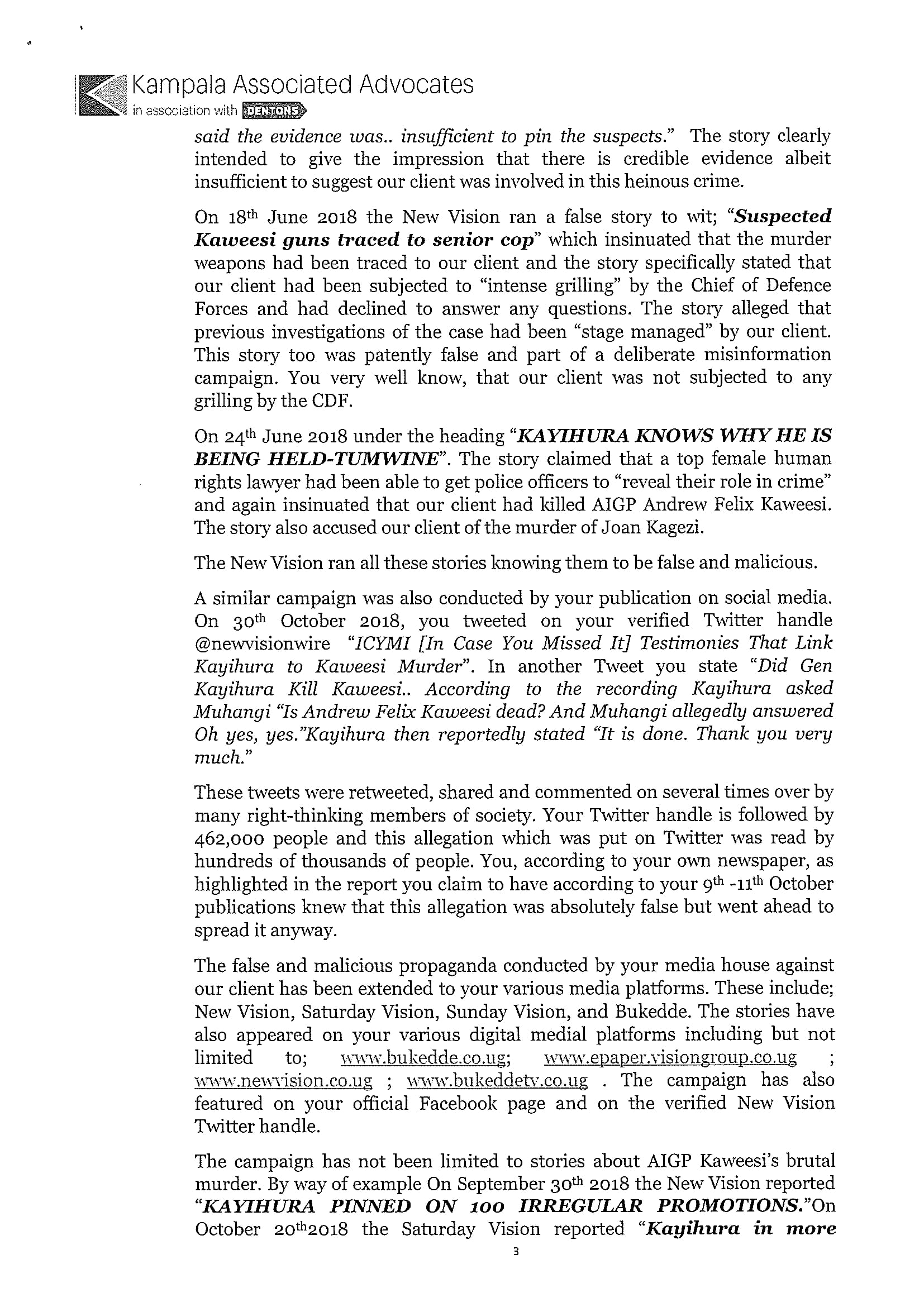 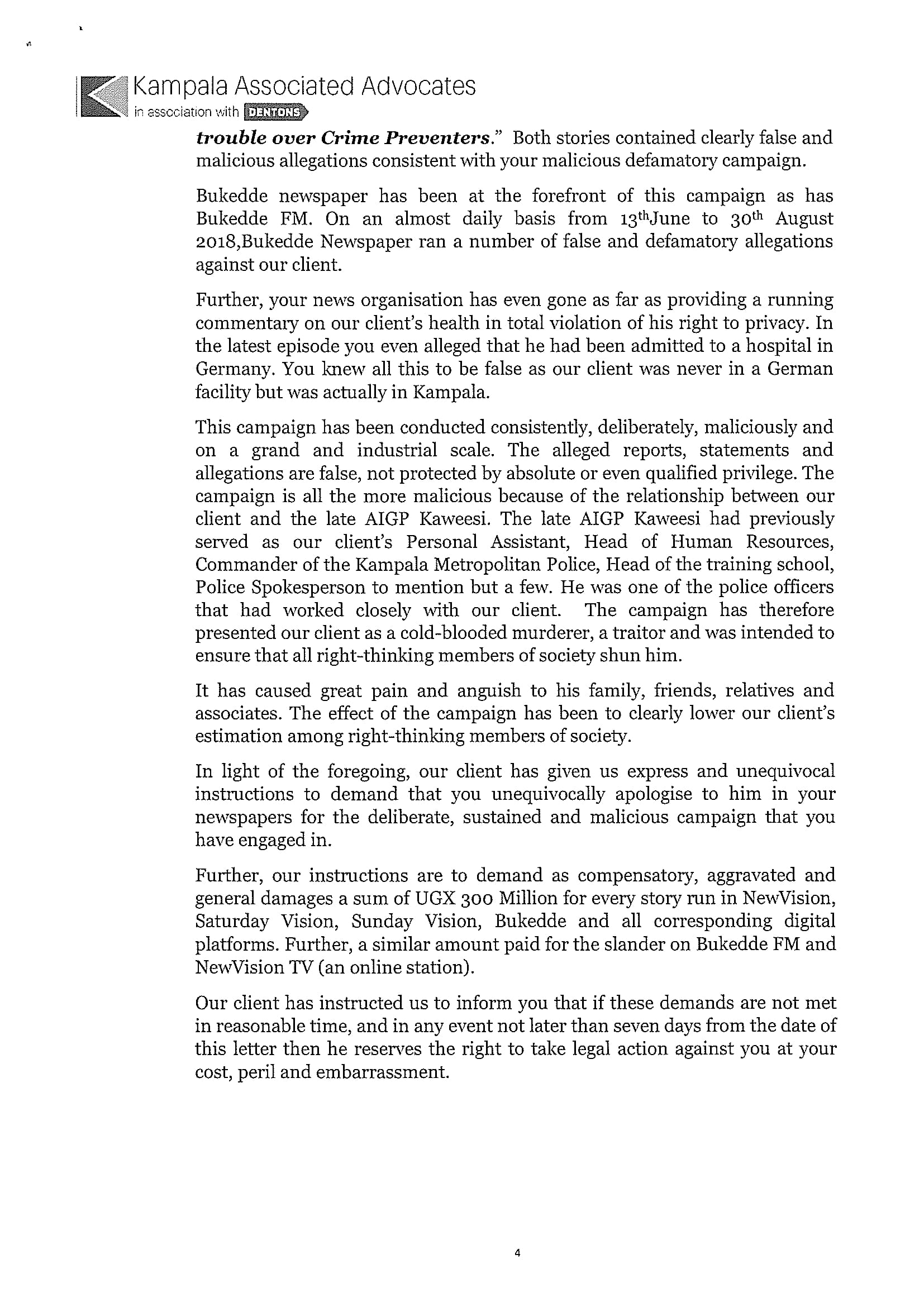 Now Kayihura lawyers say that New Vision reported that even the audio recording (used to incriminate Kayihura) was proven to be fabricated.

And that the joint team of security agencies that were investigating the case arrived at the conclusion that it was “practically impossible for the audio data to be stored on the system for eight months” and further that there was evidence that “the audio was compromised.”

The New Vision has in the past days published a number of Kaweesi murder series which lawyers claim is just malice and aimed at discrediting and incriminating Kayihura who as fired and later arrested for misleading the Police force.

Lawyers, for example, claim that in the October 9 story titled “Did Kayihura Kill Kaweesi?” New Vision in the story indicated that there was evidence, including a purported voice recording and the number of witnesses, which indicated that Kayihura was part of the plot to end Kaweesi’s life.

“You published allegations that you knew by then to have been false, fabricated and thoroughly discredited including the fake audio,” lawyers wrote faulting New Vision for running the story well aware that the allegations were false and “malicious ”

“Our client has never recorded any statement in respect of the said allegations and that claim was
totally created by your newspaper,” the legal notice says on another story about Baronza, a former Kayihura aide who is wanted by Uganda police and Interpol on the same.

On a number of other stories according to the legal documents, including the one titled “Suspected Kaweesi guns traced to senior cop”, lawyers claim this insinuated that the murder weapons had been traced to Kayihura.

They went ahead to allege in the legal notice that, the above story specifically stated that Kayihura had been subjected to intense grilling by the Chief of Defence Forces (CDF) [Gen David Muhoozi] who had declined to answer any questions.

Quoting from a story by New Vision, the lawyers noted that the “story was patently false and part of a deliberate misinformation campaign. You [New Vision] very well know that our client was not subjected to any grilling by the CDF.”

The lawyers also claim that in the story, New Vision alleged that previous investigations of the case had been stage-managed by Kayihura who was at the helm of the force.

With a number of accusations, the lawyers fault New Vision of running an online campaign against Kayihura on its official and verified Twitter and Facebook accounts.

The lawyers allege the tweets shared by the same paper re-tweeted, shared and commented on several times over by what they term as “many right-thinking members of the society.”

“Your Twitter handle is followed by 462,000 people and this allegation which was put on Twitter was read by hundreds of thousands of people,” the lawyers say.
“Our client has given us express and unequivocal instructions to demand that you unequivocally apologize to him in your newspapers for the deliberate, sustained and malicious campaign that you have engaged in.”

They also noted that “our instructions are to demand as compensatory, aggravated and general damages Shs300 million for every story run in New Vision, Sunday Vision, Bukedde and all corresponding digital platforms, further similar amount paid for the slander on Bukedde FM and New Vision TV.”

By press time, New Vision legal team was yet to respond to claims by Kayihura. However, PML Daily understands that New Vision was officially served with a copy of the legal notice and acknowledged the receipt of the documents.