KAMPALA – Sections of the public including musicians have threatened to boycott Namboole activities and Uganda Cranes games accusing the stadium authority for frustrating Bobi Wine’s concert.

Walukagga faulted Magogo for mixing football with politics after the cancellation of the much anticipated Kyarenga concert.

Initially, the stadium’s  management had cleared Bobi Wine to have his concert on November 9.

“It has come to the Federations notice that Mandela Stadium management has entered into an agreement to have a public event take place on November 9, 2018 within the stadium,” Edgar Watson noted adding that “any public event within the International football match period will put the stadium into an unacceptable standard to detriment CAF docking off points from the Uganda Cranes for the upcoming match due on Saturday November 17 with Cape Verde.”

Following the complaint by FUFA, Nomboole stadium cancelled the agreement they had entered into with Emma promotions and marketing agency.

According to the agreement letter signed by Ssewanyana Emma Sserugo, the concert promoter, the concert had been cleared to be hosted on November 9, 2018.

Bobi Wine also fired back at Namboole stadium management and FUFA—accusing them of being used by the state to frustrate his concert.

“To the administrators of Namboole stadium, officials of FUFA and others who are used in these kinds of dirty games, please know that Ugandans are watching,” Bobi Wine posted on social media.

He added that “no matter how much pressure you get from the regime, always do your job without fear or favour. Namboole belongs to Uganda. It is not private property. The positions you hold there are public positions. You must never use them against the people.”

Bobi Wine also alleged that Namboole administration was put under intense pressure by the state for entering into an agreement with him to host his concert that the state is doing everything possible frustrate his other businesses.

Unlike some of his fans Bobi Wine has Monday morning on social medi said he doesn’t agrees with boycotting Uganda Cranes games trending campaign saying his fans are acting out of anger over Kyarenga cancellation.

“These young men [Players], just like most of us work hard to raise our flag high use their talent even when they are insufficiently facilitated,” he said adding, “If musical talent is being suffocated, let’s not take all the other talent down the drain.”

He added that “Uganda Cranes is our national team in which we should always take pride and support with all our abilities.

“Our national team is the mirror of the best and worst in us as a nation so all they need is Love and understanding, not condemnation,” Bobi Wine posted. 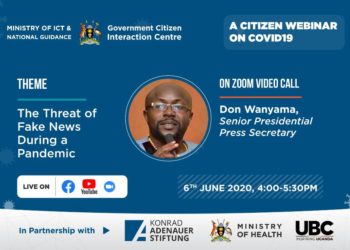