She wondered why males are still holding many leadership and academic positions at the university despite having many qualified female professors.

“How is it possible that in this day and age, the oldest university in Uganda has no woman elected onto the executive of its academic staff association? What patriarchy is this? What phallocentricism allows Muasa to be a leadership organ occupied by only men?” she said.

Dr Nyanzi also highlighted the dominance of men in the Makerere administration structure.

However, Dr Deus Kamunyu Muhwezi, the Muasa chairman, said their constitution is very clear on who is eligible for any leadership position.

“The Muasa constitution which governs us is very clear on who should become a leader and actually during its review, it had a good representation of women,” he said.

Dr Kamunyu added that gender balance at the university is among Muasa priorities.

“We are committed to empowerment of women and building an environment where men and women have equal opportunities and fair competition,” the Muasa boss said. 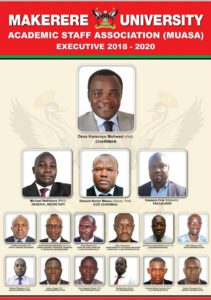