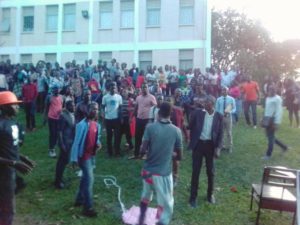 Some of the scenes that marred the elections on Wednesday.

Salim Papa Were has been voted the 84th president of Makerere University in a poll that attracted 15 candidates.

While invalid votes totalled to 680.

Were replaces FDCs Kato Paul, whose term ended a few weeks ago.

Low voter turnout characterized the polls and Mr Emmanuel Obbo, who was among the guild contestants told our reporter that he was unhappy with the  low turnout of voters and suggested that the university should suspend lectures on polling dates to allow ample time for voters to take part in the election.

However, at medical school over 300 students were not allowed to vote because their names were not on the voters registers.

In a message posted on his official facebook page , the University Vice Chancellor Prof Barnabas Nawangwe said he looks forward to working  with Mr Were to transform the University.

“I congratulate Mr. Salim Were upon being elected the next Gguild president of the great Makerere University. I look forward to working with Mr Were to lift Makerere to greater heights,” the message reads in part.

Prof Nawangwe asked other contestants to support the president elect and his ideas for a better Makerere.

“I call upon the other contestants to support Mr Were in his new role so that TOGETHER we can make Mak Greater,” Prof Nawangwe added.

The elections were characterised by violence and chaotic scenes.

The chaos began during campaigns that were held at the different halls of residence. At a rally at Mary Stuart, supporters of different contestants clashed as candidates campaigned.

This forced the university administration to suspend the guild elections, forcing the then electoral body chairperson, Mr Peter Makumbi to resign amidst bribery allegations.

However, on Monday March 12, the electoral commission re-nominated guild candidates..

Again candidates were given Tuesday March 13 to campaign which was not enough according to Obbo.

The voting exercise that was supposed to end at 8:00pm on Wednesday, went on up to midnight.