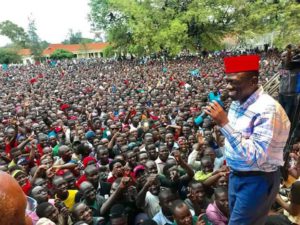 President Yoweri Museveni and Opposition leader Dr Kizza Besigye, on Tuesday added gloss to the by-election for Jinja East parliamentary seat after they campaigned for their party flag bearers ahead of the polling day on Thursday.

Although eight candidates in the race, the tight contest is between NRM’s Nathan Igeme Nabeta and FDC’s Paul Mwiru respectively.

Thousands of NRM supporters endured a heavy down pour in Kilembe-copper Village to welcome Mr Museveni, also NRM party chairman, as he sought to convince them to return Nabeta to Parliament after the Court of Appeal cancelled his election over malpractice. NRM chairperson for eastern region Mike Mukula, party secretary general Justine Kasule Lumumba, ministers and MPs graced the campaign.

“I came here to introduce the candidate of NRM, Igeme Nabeta, so that you elect him and we help your area,” Mr Museveni told the excited supporters.

He added: “These people are misleading you instead of showing you the right path. They say they’re going to use magic to end poverty, but I don’t have all those. You people know me, I’m Museveni, son of Kaguta, I don’t perform miracles; I just show people the way. Let no one lie to you that you’ll get something just by praying. There’s a proverb that says, ‘God helps those who help themselves,’ that’s what NRM is advising you. Make sure that what is yours isn’t stolen, the councilors should bring what belongs to you, I can also work directly with youth groups here. Therefore, give me an MP who’ll remind me and follow up what we’ve agreed.”

“NRM has brought peace to the whole country and in order to bring peace because we’re running a democracy, we need to have enough MPs who will second the party in power, this is why you should vote for Igeme Nabeta not Paul Mwiru. Even if the NRM MP is sick and sleepy, he’s still better than an acting opposition MP who’s very active. He might be inactive in other things but if he seconds the issues of government, then he has contributed a brick to the peace of the country. Infrastructure, this is the foundation to our economy. Out of the 8 big roads in Busoga, the one’s which we’ve not yet started on are 3. Those who talk about things now know that 5 roads are either done or being done,” Mr Museveni said.

On his part, Nabeta said: “I keep telling people of Jinja East that President Museveni is the bus driver and I’m just a conductor. I also tell them that Museveni is the minister of finance. These youth support you because they believe I can do the work.”

Dr Besigye said: “Mwiru won the February 2016 election with a big margin but they nullified his rival’s victory, Court had only one option of declaring him winner but it disappointed him by not declaring him yet they knew that he won the election. So on Thursday, justice by showing the whole world that the 2016 winner was Mwiru.”

Gen Muntu, said voting Mwiru will be an indication that President Museveni cannot bribe all Ugandans as he did when he bribed over 317 MPs to amend the Constitution.

Bugweri County MP Abdul Katuntu said: “This is wonderful, it’s a clear victory, and this is outright victory. People of Jinja East are determined and nothing is going to stop them,”

Kyadondo East MP Robert Kyagulanyi said: “My interest in this election is to compete for freedom, effective and honest representation. What unites Mwiru and I is bigger than me and him, we stand for the same values…”

According to the Electoral Commission, 28,000 people are expected to vote on Thursday.

The seat fell vacant after the Court of Appeal nullified Nabeta’s victory and ordered fresh elections.