Govt takes over Mountains of the Moon, Busoga universities

President Yoweri Museveni has directed the Education and Sports ministry to takeover Mountains of the Moon and Busoga universities.

In a letter dated January 8 and addressed to the Education minister Janet Museveni, the President noted that although government didn’t plan to take over the two private universities, there is need to rescue students studying there.

“I am writing to direct you to take over two private universities which some of our people acting in good faith, started many years ago. The two universities are Mountains of the Moon and Busoga University,” Museveni’s letter reads in part.

Last year, the management of Mountains of the Moon University applied to government to take it over the institution and turn it into a public university.

Mountains of the Moon located in Fort Portal was established in 2005 by a team of eminent people from Tooro region as a community university.

The university has, however, been grappling with challenges of paying staff salaries and improving infrastructure, a situation that forces its vice chancellor Prof. John Kasenene to apply to the Education ministry, asking the latter to take over the institutution.

Busoga University on the other hand has been in the media over allegations of awarding fake degrees, among other irregularities. The National Council for Higher Education last month revoked the university’s licence and the government takeover aims at salvaging the university. 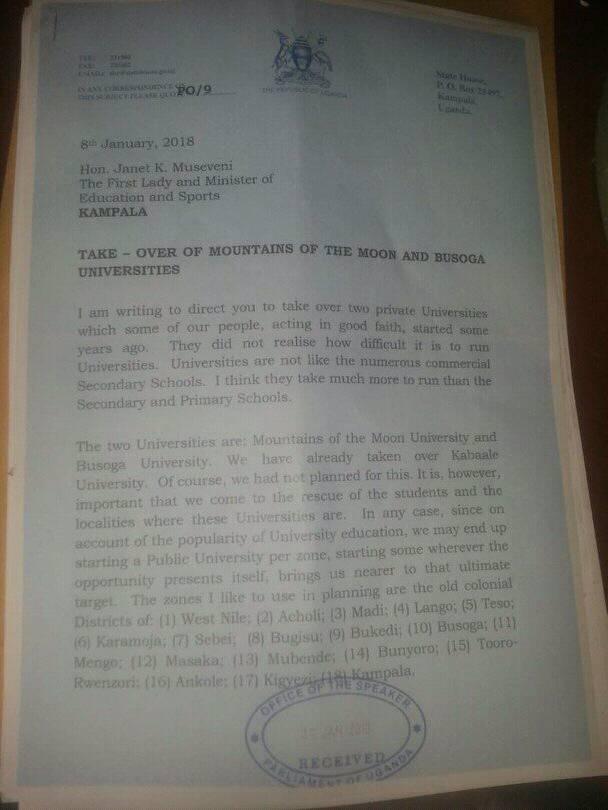