JINJA– Five Red Pepper directors arrested together with three editors have been charged with misprision of treason.

Sources close to the ongoing interrogation of the editors currently jailed at police detention facility at Nalufenya, Jinja told PML Daily that the tabloid newspaper bosses, arrested on Tuesday evening have also been charged with terrorism and disturbing the peace of Gen. Salim Saleh, and security Minister Lt. Gen. Henry Tumukunde.

Senior Superintendent of Police Mark Odong is leading a team of detectives who recorded the statements on Wednesday night, after a whole day search of their offices and cars.

“We don’t know when we shall be produced in court because we are still here,” one of the directors told PML Daily in confidentiality.

Police on Tuesday closed down Uganda’s popular tabloid premises in Namanve, declaring it a scene of crime.

Police spokesman Emilian Kayima said the police will remain at the premises until they finish investigations in relation to a story that the newspaper published, saying Uganda was training Rwanda rebels to topple the government of President Kagame.

They are being held at Nalufenya. Human Rights organisations have criticised the police for criminalizing journalism work. 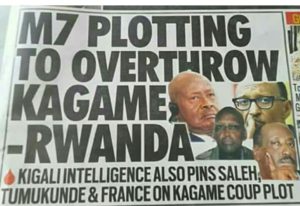