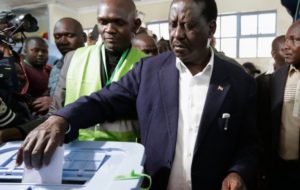 NAIROBI: The National Super Alliance (NASA) has rejected the results of Tuesday general election saying they don’t represent the will of Kenyans.

NASA leader Raila Odinga said they are concerned the outcome is not in line with the law.
He said it was defeating that despite IEBC agreeing to follow the law the tallies from the constituencies were not put up.

“We need a clean sheet of tallies from all the constituencies..this is a sham and a contravention of Section 39 of the Elections Act.”

Raila said the Form34s are supposed to accompany the results and not as is the case with the current tallying process.

“These results are wrong…they have a formula factored in…we have evidence to show that the first 377 polling stations showed me(Raila) leading. These were not shown in the national tallying centre.”
Raila said their agents were allegedly blocked from scanning the results of the poll.

The ODM leader said that the ongoings confirmed their fears that the assassination of IEBC ICT manager Chris Msando had something to do with the ‘doctored’ results.He accused the electoral commission of bypassing the constituency returning officers as directed by the Court of Appeal.

“The results are fictitious. We have got a number of our agents who sent us results which do not marry with the ones we see here.”

“SCANNED FORMS ONLY”
The Opposition leader added that they will only believe forms that are scanned by their agents at the polling stations within the constituencies.

“The court said these results will be final. What is going on here is contrary to what the court ruled,” he said.
Raila said the call for the rejection is not specifically to his supporters but to Kenyans at large. But in their latest review at 1 am, the IEBC said the results are from presiding officers at the various polling stations.

“To enhance transparency, the commission has allowed the political party agents access to the results.”
“We expect the results to continue streaming in today,” commissioners said in a press briefing.

The results were drawn from 10,145,531 valid votes tallied from the 19.6 million registered voters.
The poll reported a higher number of rejected votes at 253,637 compared to those registered in the March 4, 2013, general election.

Raila spoke after Senator James Orengo and NASA co-principal Musalia Mudavadi said the results amount to a fraud and urged their supporters to ignore the same.

“Everybody out there should be prepared to stand up for their rights and reject the results, ” Orengo said told the press on Wednesday.

“It is disturbing that a very long process to reach a legal arrangement on the results, the commission went ahead to commit a fraud on Kenyans,” he said.
Jubilee has however countered the claims.

“NASA CLAIMS HYPOCRITICAL”
Jubilee secretary general Raphael Tuju said the claims by NASA hypocritical.
He said the Raila led coalition cannot demand that results transmission should be suspended when a few days ago they were in court demanding that results must be relayed in real time.

“The results should be disregarded. According to us, they are null and void. For the commission to continue displaying the results, the action amounts to nothing,” Orengo said.

He said any Patriot seeing an illegality being committed cannot leave impunity to go unpunished.
To remedy their dissatisfaction, he said the coalition will address that at a later time adding that IEBC has deviated from the plan agreed by the legal process.

Orengo said the results being transmitted to the Independent Electoral and Boundaries Commission were not verifiable as the party has not had access to Form34A. The duo said the results relayed at Bomas of Kenya does not meet the legal threshold on grounds they are not backed by any documentation.

“What is being relayed as you may have noticed are delayed results which are transmitted in bulk,” Mudavadi said.
“What is going on here is not a process that inspires confidence. We need the results based on the Form34A. Most of the results here do not have the forms. Where are the results from?”

Orengo added: “The commission itself has said that the announcement of the results will depend on Form34A and Form34B…”
“It beats common sense for those results to be displayed when in law they are directed by the court that the results must be from the constituency polling station and not changed,” he said.

The NASA deputy chief agent further asked IEBC to provide scanned copies of Form34A as they agreed during their deliberations. He claimed that contacts at the commission were not reachable when they sought to handle the discrepancies over the results.

The points of contact who were to send the forms to our IT guys are not available…
“What IEBC has done is to send data which is keyed in electronically and is not based on the Form34A. This is what happened in 2007 and 2013,” he said.

Orengo said the commission should have waited for the Form34A instead of creating an opportunity to fabricate the results.

“A presiding officer can go to a place where there is a 3G network through a phone but those results cannot be the ones witnessed at the polling stations by agents.”