Police have arrested a senior police officer suspected of raping a school girl.
Assistant Superintendent of Police Gilbert Bwana Arinaitwe reportedly committed the offence last week.
Mr Arinaitwe rose to prominence after he brutally arrested former Forum for Democratic Change (FDC) president Dr Kizza Besigye during the heat of the Walk to Work protests in 2011.
He later became a born-again Pentecostal church preacher to the surprise of many who had taken him to be a ruthless policeman.
Police spokesman Asan Kasingye this morning said Arinaitwe last week raped a young woman in his car.
“ASP Gilbert Arinaitwe Bwana arrested on allegations of rape. Sad!” Kasingye’s postread. 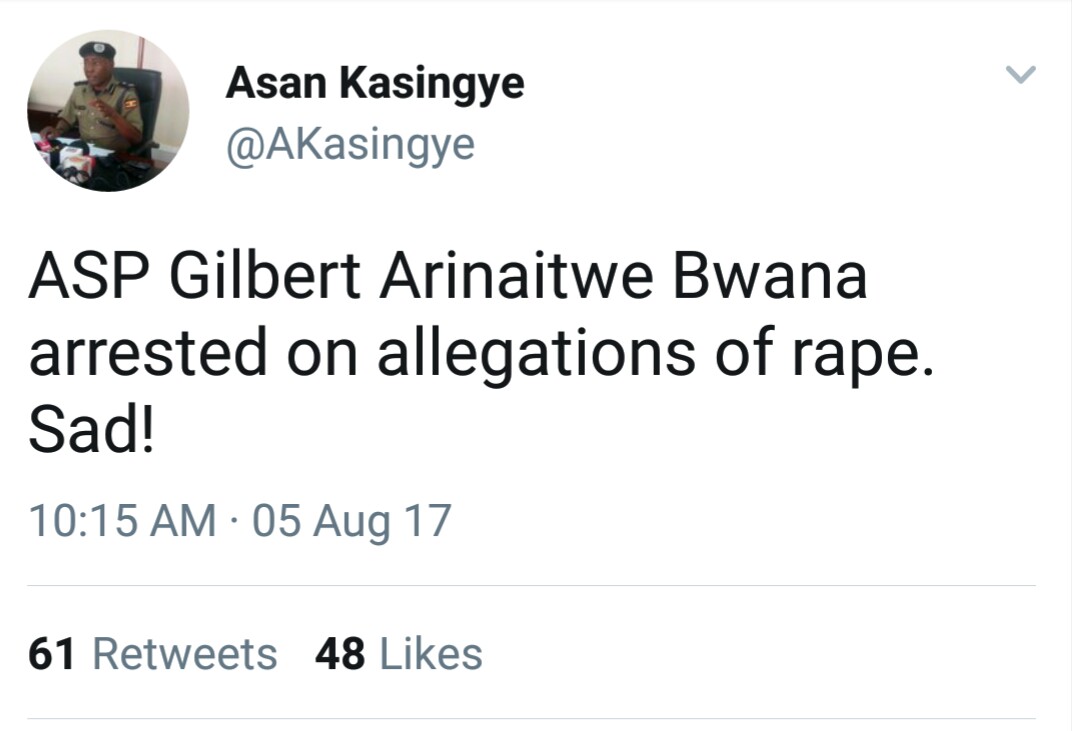 Arinaitwe met the victim (name withheld) at the CIID headquarters in Kibuli, Kampala, according to Kasingye.
She had been taken there by her mother who was reportedly accusing her of losing concentration in class and putting to waste her hard-earned money. The mother reportedly hoped that her daughter would be counselled by the officers.
It is reported that Arinaitwe, who was in the same office when the victim’s mother sought police intervention, somehow exchanged contacts with the girl.
Arinaitwe then allegedly called the girl and arranged to meet her in the city suburb of Nakawa. He is reported to have called her into his car and allegedly raped her, police sources say.
Arinaitwe is not new to scandal. In the heat of the Walk to Work protests in 2011, he was filmed hammering and smashing the car window of Dr esigye before pepper-spraying him blind.
Besigye, then leading the “Walk to Work” protests against skyrocketing inflation, had to be rushed to Nairobi for treatment.
Police’s public image was badly dented and Arinaitwe was suspended from the Force. Thereafter, his life seemed to have taken a nosedive, his wife reportedly divorced and he lost his fortune. But the public could not forgive let alone forget him and in 2015, there were rumors that he run mad, but police came out to deny the rumours.
But fortune later came his way and he once again redeployed. He also sought solace in God and like Saul in the Bible, he started preaching the word of God with reckless abandon.
Recently, PML Daily caught up with him preaching at a church in Masajja.