A $450 000 health facility donated by an American businessman to a rural community in remote Agago District Acholi sub-region has been commissioned by President Museveni.

The hospital, whose estimated cost in Ugandan currency is in excess of Shs1.6 billion, comes as a God-send to people in Adilang sub-county from a district which was carved out of Kitgum District in July 2010.

For years, the people here have have depended on distant Kitgum and Abim districts for medical services. For many, it has been a testing trek from home to hospital. Then along came US Businessman David Fagerlee from Minnesota. His donation has enabled the construction, equipping and staffing of health facility.

Thanks to Fagerlee, patients in this rural backwater of Adilang no longer have to worry about the long commute to the government referral facilities in Kitgum or Abim for free health care.

This gesture of notable philanthropy began as a pledge to Gulu Catholic Archdiocese. Fagerlee was invited by the Vicar General, Monsignor Matthew Odong, in 2009 to witness the opening of Archbishop Flynn Secondary School in Pader District. Moved by the conditions he ecountered on that trip, Fagerlee made up his mind.

Adilang like most of Acholiland was ravaged by the two decades of civil war between the rebel Lord’s Resistance Army and governmment of Uganda. What little social services were available before this most devastating war, were all but wiped away.

Like other benefactors, the businessman from Minnesota will find that his contribution is of no mean measure.

Fargerlee commended President Museveni for honouring his invitation to commission and his decision to help the community in Adilang sub-county. He said his donation was informed by a desire to have everyone access medical care.

The President responded in kind and hailed Monsignor Odong who linked Fagerlee to Adilang sub-county. He said the facility will complement government efforts to reduce maternal mortality rates in the country as well as promote immunisation.

He also cautioned residents against sexual promiscuity, saying it would expose them to Hepatitis B and HIV/AIDS which are rife across northern Uganda.

Kampala is not a battleground, police tell bodamen 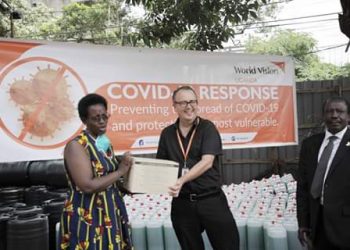 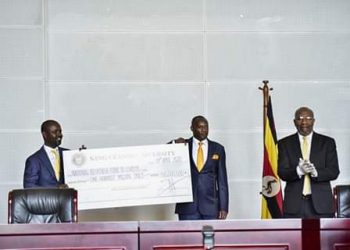