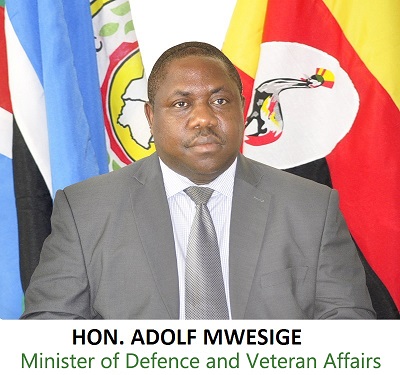 KAMPALA – The Ministries of Defense and Security have delivered 90% of the commitment of its manifesto set in 2016 at the start of President Museveni’s five-year term, Defense and Veterans minister Adolf Mwesigye has said.

Mwesigye was on Tuesday, May 19, presenting the sector’s achievements at the NRM Manifesto Week at the office of the prime minister.

He said that the defense sector identified key commitments to guide the implementation of the manifesto, however, the President gave them strategic directives that have also helped them in achieving the set plans.

According to the Minister, the defense sector enhanced UPDF capability and capacity through acquisition and maintenance of weapon systems and equipment in order to enhance the firepower, force protection, mobility, and sustainability.

“The acquired equipment is in sync with the technological advancements to address the current and future threats,” Mwesigye said.

He said the presidential directive was to maintain the classified expenditure on items that are crucial for UPDF.

“Classified budget has been enhanced to meet the capability requirements. Capabilities have been generated and consolidated to sustain Uganda’s capacity to address the current and future threats in a bid to sustain the peace and security,” he said.

Mwesigye further revealed that targeted recruitment was enhanced, saying that since 2016, the Ministry has recruited an average of 4,000 troops annually to replenish the UPDF manpower.

“In addition to the recruits, the Ministry has recruited over 26,000 LDUs to compliment the regular force in sustaining peace and stability in the country,” he said.

He said there has been training for the UPDF to make the army thrive at the national, regional and global stage

“Training was undertaken both locally and internationally in order to have an efficient force that can tackle threats of the defense of Uganda and deployments to enhance regional and international peace, stability, and security, ” said the minister.

While commenting on the salaries and wages in the sector, Mwesigye said the president directed that they should pay well scientists and gradually increase salaries of soldiers until they come in line with that of teachers and medical personnel.

“Salaries for soldiers have been gradually increasing. In FY 2018/19, partial salary enhancement for lower ranks was done where a Private’s salary was enhanced from UGX 385,000 to UGX 485,000,” he said.

He added, “However, this needs to be enhanced to UGX 537,837 equitable to a grade III primary school teacher. The enhancement will also be required across the board from a lower rank to General.”

In regard to paying scientists, the minister said they have been able to pay medical personnel however there’s still a gap in payment of other category scientists.

Mwesigye said the defense ministry has engaged so much in the activities of the ministry of health.

“The ministry supported the ministry of health in containing any form of Epidemic (Ebola and COVID-19) outbreaks within the Country and Region. Most recently, UPDF medical personnel offered medical services during the fight against the spread of COVID,” he said.

He further revealed that the ministry of defense provided preventive, curative, and rehabilitative services to Officers, Militants, their immediate families, and the surrounding communities in its 139 Health Centres.

In addition, Mwesigye said the ministry has been able to engage in the construction of health facilities such as health centre IIIs in different areas, renovated CMRC buildings, among others.

Barracks locations including Amudat, Kotido, Lugazi, Olilim, Rubongi, Bombo, and Kaabong which has helped to reduce the expenditure of water in Barracks.

The minister said the main challenge affecting the ministry is the lack of funds to implement the plans.

“The ministry commenced on the construction of the military referral hospital. However, the ministry is affected by inadequate funds worth UGX 7.2bn for equipment and completion of cancer and heart institutes,” said Mwesigye.

He added that the ministry planned to establish the National Defense College Uganda (NDCU) which requires UGX17.2b to commence the project which they lack.

He, however, promised to pursue the unfulfilled manifesto pledges in the FY2020/2021.