The news week ended on the backdrop of a hotly contested race for Hoima Woman MP, with the opposition rejected the victory of the ruling NRM’s Harriet Businge, declared winner by the Electoral Commission.

In other news, village mates of the former Inspector General of Police and out of favour Gen. Kale Kayihura want a helping hand for him from the state as US government sanctions lurk while in sports, FUFA president Moses Magogo has electes to step down in the wake on an inquiry about World Cup tickets 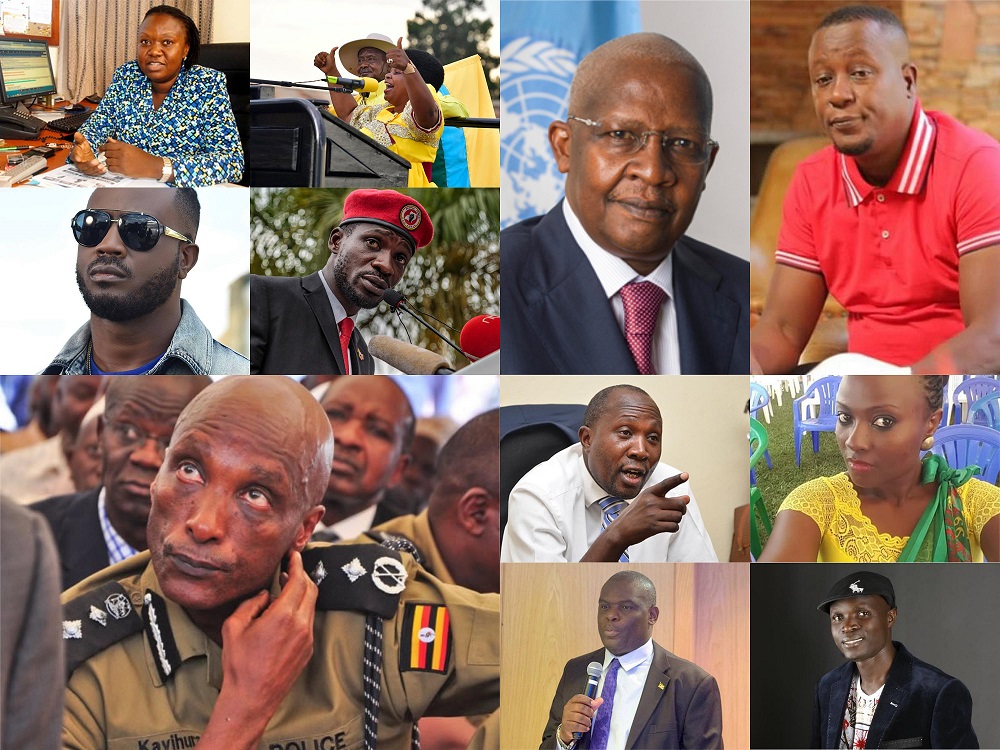 KAMPALA – President Museveni has in his latest missive to the Bazzukulu (grandchildren) aimed a dig at the opposition forces, in the wake of the ruling party’s victory in the Hoima and Kaabong district by-elections and now claims the opposition was involved in systematic rigging.

The president has also taken a swipe at the police, accusing them of looking on, as the opposition orchestrated “the cheating and violence”.

In Kaabong District, Ms Christine Tubo Nakwang of NRM won overwhelmingly with 22,532 votes while her contender Ms Judith Nalibe Adyaka of FDC got only 1,692 out of 26,189 total number of ballot papers counted.

The opposition has since rejected the results announced in Hoima, citing massive rigging but Mr. Museveni is adamant the population is rewarding the ruling party after results of its development programmes are now clear for everyone.

Kigezi leaders ask govt to defend Kayihura over US sanctions

KISORO – Some leaders in Kisoro appealed to the government to defend former Inspector General of Police Gen. Kale Kayihura against allegations of corruption and abuse of human rights leveled against him by US Treasury Department that has also imposed travel sanctions on him.

Led by the LC5 Chairman Abel Bizimana, they said what Gen. Kayihura did while serving as IGP was good for the ruling government and that is why he was always praised as a good cadre besides being promoted from one rank to another.

In the new guidelines dubbed ‘Regulations on the Conduct and Supervision of PLE 2019’, UNEB dropped the Education Management Information System (EMIS) numbers that were used last year.  The examination body will now provide a random number for each paper sat by candidates.

KAMPALA – The Director of Public Prosecutions (DPP), Justice Mike Chibita, was elected to the executive committee of the International Association of Prosecutors.

According to a statement from the office of the DPP, this was at the IAP 24th general meeting held in Buenos Aires, Argentina.

The appointment of Ms Kawesa, who was the Deputy Director of Communications and Public Relations, was announced by the Deputy Clerk to Parliament in charge of Corporate Affairs, Mr Henry Waiswa, in a communication to all staff of the communication department.

KAMPALA — Justice Flavia Angelina Ssenoga of the High Court in Kampala has on September 24 sentenced a father to 25 years in jail for defilling his 12-year-old biological daughter.

Peterson Musoke was found guilty of impregnating his 12-year-old daughter and infecting her with HIV/AIDs.

Nabukenya, who was only appointed to the position in June 2017, passed on at Mengo Hospital on Tuesday evening after a short illness.

Nabukenya reportedly got ill on Tuesday morning and was rushed to the hospital but in the evening, her condition deteriorated forcing medics to put her on oxygen.

HOIMA – President Yoweri Museveni urged Bunyoro to shun the opposition, saying they have no agenda for Uganda.

While campaigning for Ms Businge Mugenyi, the NRM flag bearer in the Hoima by-elections on Tuesday, the President said with all the development Hoima District and the entire sub-region went under his regime, there is no need for an alternative government. Ms Busingye was declared winner of the polls after defeating FDC’s Asanasi Nyakato.

Mayinja last week caused a stir when he sang a song titled ‘Bizeemu’ before President Museveni, in which the former highlights the socio-economic situations in the country such as poverty, murders, kidnaps and unemployment.

In response, Bebe Cool lashed at Mayinja, noting that the latter forgot where he came from and should appreciate NRM’s present achievements.

But in response, Mayinja said Bebe Cool pretends to be comfortable with everything because he receives money from the party in power.

Rugunda represents Uganda at UN amid question marks over Kutesa

KAMPALA – President Yoweri Museveni delegated Prime Minister Ruhakana Rugunda to represent Uganda at the 74th Session of the UN General Assembly amid question marks over whether the obvious choice, Foreign Affairs minister Sam Kutesa, was eligible to travel to the US.

The UN General Assembly, began in New York on Tuesday, September 24 and ran up to Sunday, September 29. The official reason is that Mr Museveni delegated Mr Rugunda to represent him as Uganda convenes the 64th Commonwealth Parliamentary Conference.

Under normal procedures, a foreign affairs minister is supposed to represent a president of a country, if the latter is unable to attend. In this case, Mr Kutesa should have attended.

KAMPALA – President Museveni asked the Minister of Works to consider China Railway 17th Bureau Group Company (CR17th), a Chinese company, for the construction of the Kampala-Jinja Expressway, arguing that they have the required finances.

In a letter dated September 18 to Works and Transport minister Monica Azuba, the President argued that since CR17th is ready to build the road and recoup their money through tolls, it is best to consider them for the project instead of letting the government borrow to construct the road under the Public-Private Partnership (PPP).

Mr Katumba, who was moved to the Environmental Protection Police Unit (EPPU), was replaced by Mr Martin Okoyo, who was Mubende District Police Commander.

In his lawsuit filed before the High Court Civil Division, Kabuleta claimed that RFBOs is an infringement of the fundamental freedom of worship of Ugandans.

In the new policy, it requires all clerics including pastors to acquire minimum academic qualifications in theology from a recognized institution, seek to enforce transparency and financial accountability in religious and faith-based institution and an elaborate procedure for anybody who wishes to start a church including declaring his or her source of income whether locally or internationally.

KAABONG – The FDC Secretary-General Mr. Nathan Nandala Mafabi and the Mr. Samson Lokeris, the member of parliament for Dodoth East in Kaabong district on Wednesday 25 engaged in verbal arguments forcing Mafabi to box Lokeris in a day broad light.

The fight which was stopped by the Resident District Commissioner of Kaabong Mr. Achia Rex started after Lokeris allegedly incited the people to get money from Nandala saying he (Nandala) had gone to Kaabong to distribute money.

In the response, Nandala accused Lokeris and other Karamoja MPs for concentrating on eating food in the parliamentary canteen forgetting to address the issues affecting the people of Karamoja.

This angered Lokeris who is also the chairperson of Karamoja parliamentary group to order Nandala Mafabi to leave Amudat or else he would taste the wreath of the people of Karamoja.

Immediately Nandala punched Lokeris at the stomach but they were separated by the security officials.

KAMPALA – President Yoweri Museveni tasked the Commonwealth countries to use their numbers to mutually promote investments, work together on security, cultural exchanges and also examine the options on trade without disturbing the Continental Free Trade Area arrangements in Africa.

The president was on Thursday 26 addressing the Commonwealth parliamentarians who were in the country for 64th Commonwealth Parliamentary Conference.

Museveni said that the Commonwealth Association is a great potential with a very big population and also with the benefit of a uniting language.

According to results announced at 3.30am on Friday morning, Ms Businge garnered 33,301 votes, while her contender, Ms Asanansi Nyakato of the Forum for Democratic Change (FDC) polled 28,789 votes.

The legislator who was on the campaigning team of Ms Asanansi Nyakato of the Forum for Democratic Change says that the election was not free and fair and that it involved several malpractices.

He said that the election was interfered by president Museveni who deployed military forces to brutalize opposition supporter.

KAMPALA —Telecommunications giant, MTN has announced UGX18M contribution towards the 8th outing of the Corporate League happening on Sunday September 28 at Kyambogo.

At this month’s Corporate league outing, there will be football group games, Volleyball games from round of 32 to finish, Tag of war and short fun races among others.

LUGOGO – KCCA FC were eliminated from the 2019/20 CAF Champions League after drawing 1-1 with Angolan side Petro de Luanda on Friday afternoon.

The Kasasiros who came into the game full of confidence after drawing 0-0 away from home, could not get the job done in the end.

Petro de Luanda opened the scoring through Ricardo Estevao penalty after Isaac Mensah was brought down in the area by KCCA FC custodian Charles Lukwago.