KAMPALA – An investigation by media giants the Nation Media Group has revealed that Lake Victoria is contaminated with heavy metals, pesticides and other microbial organisms that have adverse effects on human and aquatic life.

The investigation by NMG, the biggest media group in Sub-Saharan Africa was guided by a scientific study, which was conducted in a three-month period last year by with a team of scientists from University of Nairobi across Kenya, Uganda and Tanzania where Lake Victoria reaches, established microbiological and chemical contaminants at the various sampling points across the lake, making fish from the lake unsafe for consumption.

This was established by taking samples from a number of landing sites across the three countries and other rivers that feed into the lake.

“Lake Victoria is contaminated with both the living organisms that cause disease and chemicals that cause poisoning, they can cause acute and chronic problems. The water in the lake is not safe, the fish is also not safe in most areas, but that can be improved through control of pollution,” Prof James Mbaria, the lead researcher and chairperson of Department of Public Health and Pharmacology Technology at University of Nairobi, is quoted by Daily Monitor as saying.

The fish samples taken during the study were found to have traces of heavy metals such as lead, cadmium, chromium, zinc, iron, copper and manganese. The study also found pesticides in the samples analyzed from the Lake Victoria basin and its catchment rivers. The samples include Fenitrothion, an insecticide that is toxic to aquatic life, chlorofenvinphos, which affects the respiratory system, cyhalothrin which can cause irritation of the mucous membrane and bifenthrin, which is very harmful to aquatic life and has been classified as a possible human carcinogen capable of causing cancer. The other is Oxyfluoren, which is used to kill broad leaf and grassy weeds is a possible carcinogen. 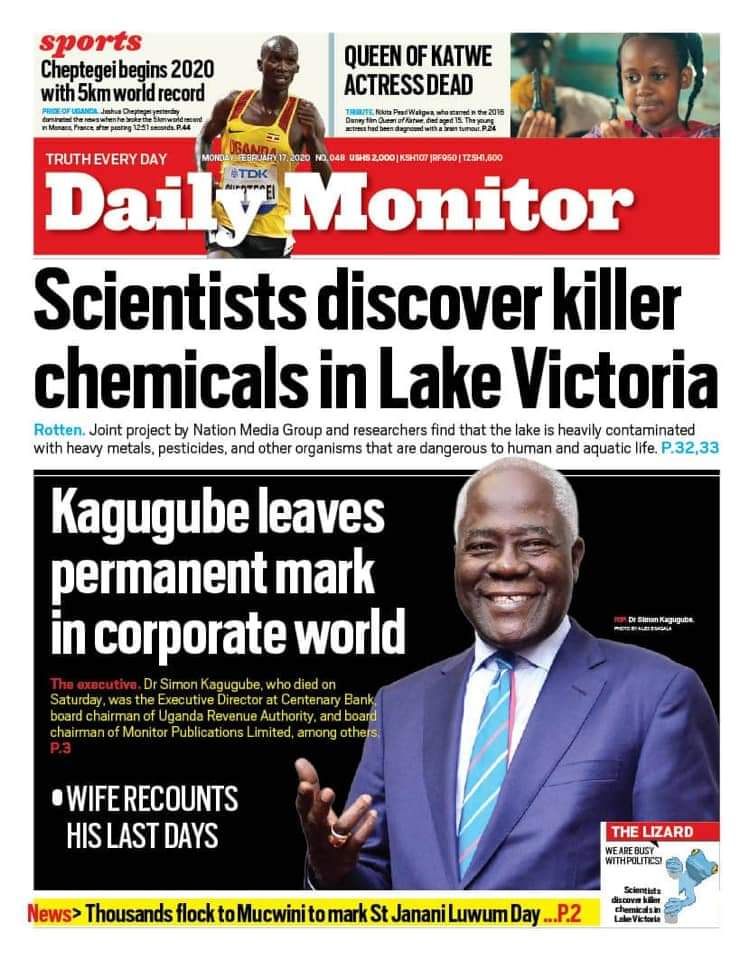 The study also revealed that several landing sites have no toilets and that they only excrete in polythene bags and pour the refuse in the lake. This was found at Kasensero, Lukunyu and Ggaba landing sites in Rakai and Kampala districts, respectively.

Lake Victoria is considered one of the most important shared natural resources by regional countries; draining an expanse estimated at 194,200 square miles. The lake’s basin is home to more than 40 million people who draw livelihoods directly from the lake, according to the World Bank.

But Prof Mbaria urged governments sharing the Lake to act before it is too late. He said number of interventions, including review of policies and attitude change, can save the situation.

Details of the investigation have been published in the Daily Monitor and Daily Nation on Monday, February 17.