Talking about birding around the world, there are not more than 5 birding safari destinations where one can expect to find over 600 bird species in only one park. Uganda is privileged to be among these with her Queen Elizabeth National Park registering more than 620 recorded bird species.

Uganda is thought to be the number one birding destination in Africa with over 1074 bird species already recorded in the country. Several tourists visit on different Uganda Birding Safaris and visit different bird watching destinations that include forests, wetlands, Savannah woodlands/grasslands etc.

You need not to miss a complete birding experience that Uganda offers and a number of eye-catching unique bird species. Among these is the King Fisher.

What is a Kingfisher Bird?

The Kingfishers also referred as Alcedinidae are a family of small to medium-sized, brightly coloured birds in the order Coraciiformes. They have a cosmopolitan distribution, with most species found in the tropical regions of Africa, Asia, and Oceania.

The family contains 114 species and is divided into three subfamilies and 19 genera. All kingfishers have large heads, long, sharp, pointed bills, short legs, and stubby tails. Most species have bright plumage (colour) with only small differences between the sexes. While kingfishers are usually thought to live near rivers and eat fish, many species live away from water and eat small invertebrates.

According to information gathered from a birding expert working with Terrain Safaris Uganda, the kingfisher bird species portray unique behaviour in their different ways of life including feeding, courtship & mating as well as feeding. Here are some of them.

Kingfishers eat mainly fish, chiefly minnows and sticklebacks, but they also take aquatic insects, freshwater shrimps and tadpoles. One amazing feature when they are fishing is closing their eyes as they dive into the water. They bob their heads before diving to accurately judge the depth of the fish. The design of a kingfisher’s beak is aerodynamically efficient, allowing it to dive from its perch, towards its prey, with maximum speed and minimum splash. In fact, the beak design is so clever that the front of many Japanese bullet trains are modelled to mimic it.

Males use Fish to lure Females to Mate

During courtship, male Kingfishers approach the female with a fish in his beak. He will hold it so that the head of the fish is facing outwards and attempt to feed it to the female. If he is unsuccessful he will simply eat the fish himself. He may have to repeat this feeding behaviour for some time before mating occurs. 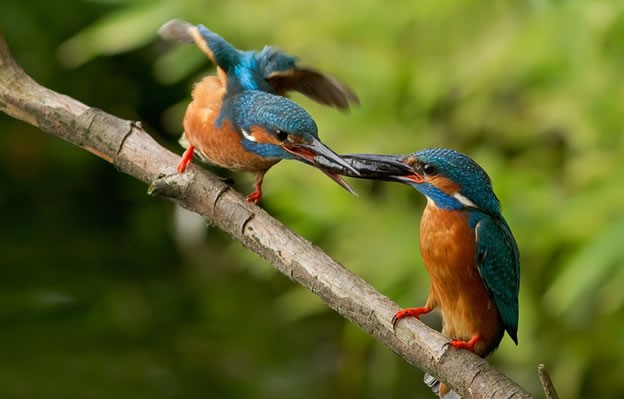 Their Courtship occurs only in spring

After successful courtship, the pair dig a nest tunnel in vertical, sandy river banks. The nest chamber at the end has a slight depression to prevent eggs from rolling out, but no material is brought into the nest. The first clutch of 6-7 eggs is laid in late March or in early April. Once hatched and out of the nest, the young are fed for only four days before the adults drive them out of the territory and start the next brood. 2-3 broods are often raised in a breeding season.

Adult Kingfishers with a brood of 6 – 7 chicks have a task of catching large numbers of fish to fill the high feeding appetite of their chicks. Each chick can eat 12-18 fish a day on average meaning the adults may catch over 120 fish each day for their brood. Chicks are fed in rotation. Once a chick is fed, it moves to the back of the nest to digest its meal, causing the others to move forward.