LAKE MBURO – Lake Mburo National Park is a compact gem, located conveniently close to the highway that connects Kampala to the parks of western Uganda.

It is the smallest of Uganda’s savannah national parks and underlain by ancient Precambrian metamorphic rocks which date back more than 500 million years.

Together with 13 other lakes in the area, Lake Mburo forms part of a 50km-long wetland system linked by a swamp. Five of these lakes lie within the park’s borders. Once covered by open savanna, Lake Mburo National Park now contains much woodland as there are no elephants to tame the vegetation. In the western part of the park, the savanna is interspersed with rocky ridges and forested gorges while patches of papyrus swamp and narrow bands of lush riparian woodland line many lakes. 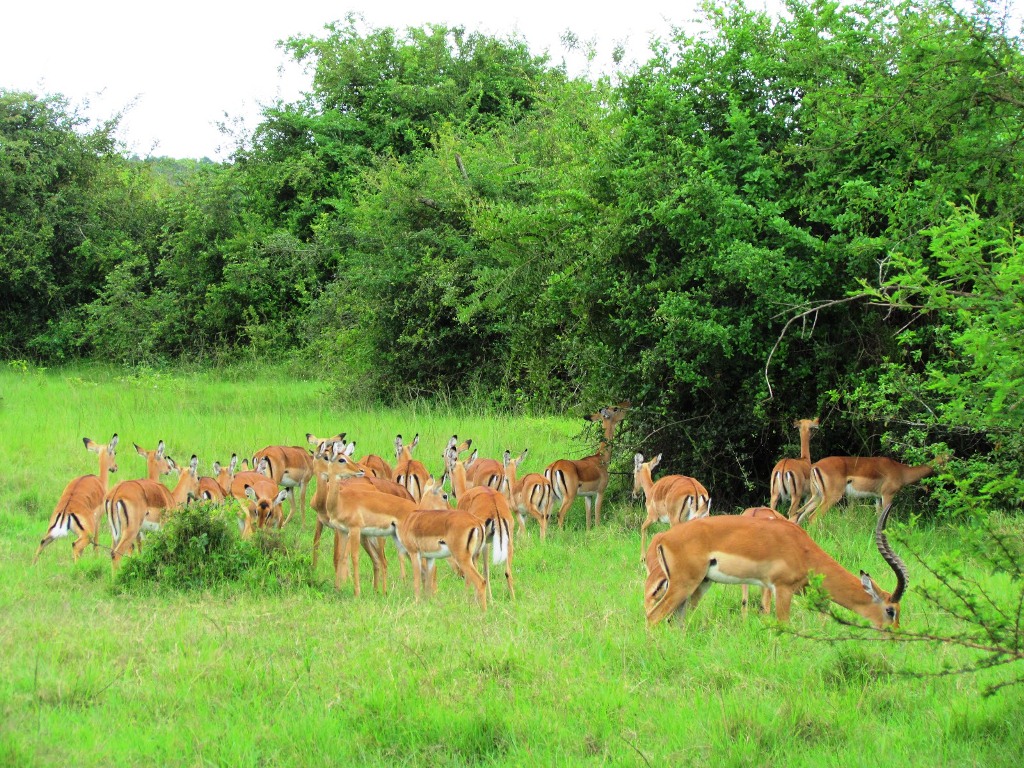 Wetland habitats comprise 20% of the park’s surface. Lake Mburo o?ers some novel means of game viewing; in a vehicle; on a mountain bike, by boat, on foot, and on horseback. This compact jewel of a park is ideally placed for an overnight break between Kampala and the protected areas of western Uganda.

A mosaic of habitats includes rock outcrops, savanna, acacia woodland, bush, forest, swamp and lakes that support a wealth of wildlife including species that are rare or absent from other parks in Uganda.  Birding is also rich with papyrus and acacia species being particularly well represented.  Visitors need not limit themselves to a game drive; the park can also be explored using mountain bikes, by boat, on foot, and on horseback.

At only 370km2, Lake Mburo National Park is small compared to many East African parks but it is home to a surprising diversity of wildlife with 69 mammal species and 332 bird species. A number of the park’s herbivores are rarely if at all, found elsewhere in Uganda.

Lake Mburo is the only park that contains impalas and the only one in western Uganda with Burchell’s zebra and eland.

Topi are only found elsewhere in Queen Elizabeth National Park. The species list was expanded in 2015 when a number of Rothschild’s gira?e were relocated to Lake Mburo from Murchison Falls National Park.

Leopards and hyenas are also present and, after years of absence, lions are once more sighted.  Hippos and crocodiles live in the park’s ?ve lakes, while the fringing swamps hide secretive wetland creatures such as the sitatunga antelope. The bird list contains more ‘swamp specials’ such as the papyrus gonelek, papyrus yellow warbler, white-winged warbler, and shoebill.  Acacia woodland bird species are well represented around the rest camp at Rwonyo and in the lightly wooded grassland valleys east of Lake Mburo.

Lake Mburo National Park lies in a rain shadow between Lake Victoria and the Rwenzori Mountains and receives an average of 800mm of rain a year. Being near the Equator, the rainfall pattern is bimodal with the long rains occurring from February to June and the short rains from September to December.

Rainfall is rather erratic and unpredictable but tends to be heaviest in April and November. The average recorded temperature is 27.50C with daily variations ranging from 21.50C to 340C.

July and August are the hottest months.

Any time of the year

Uganda Wildlife Authority (UWA) provides budget accommodation, in the form of bandas and standing tents, at Rwonyo Rest Camp, and a campsite nearby on the shore of Lake Mburo.

Mid-range cottages are available at Arcadia Cottages, 1km south of Rwonyo while 3km north, Lake Mburo Camp provides luxury tented accommodation. The renowned Mihingo Lodge, which extends across a large, rock kopje just outside the park, is accessed through the easterly Kyanyanshara Gate.

The park also has a conservation education center, 1km west of Sanga Gate. This provides accommodation and an education hall for school groups, visitors, seminars and workshops.

The eastern shores of Lake Mburo can be explored by boat, departing from a jetty at the lakeside campsite near Rwonyo Rest Camp.

Watch out for crocodiles and hippopotamus during the two-hour voyage. You can also sight a variety of birds including pelicans, herons, and ?sh eagle and perhaps the rare ?nfoot and shoebill. Fishermen with their own equipment may ?sh in the lake from the campsite by arrangement. 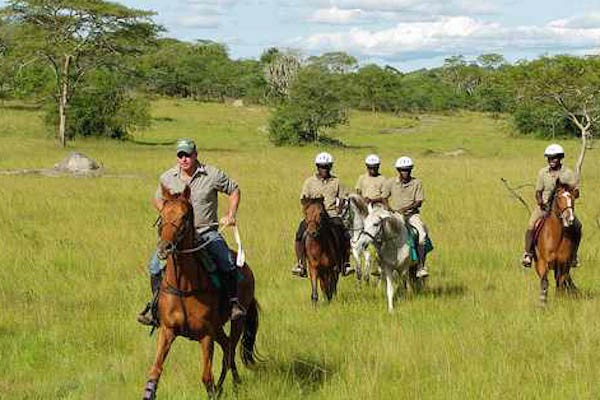 A network of game tracks explores the eastern hinterland of Lake Mburo, providing the chance to see a variety of savannah animals and birds.

Night drives with a ranger guide provide the chance to see nocturnal animals such as bushbabys, pottos and perhaps even a leopard.

Salt Lick Walk Guided walks explore the park around Rwonyo, culminating in a visit to a natural salt lake where wildlife can be viewed from a timber observation platform.

This small tract of forest on the western side of Lake Mburo is home to a variety of forest bird species.

Rubanga can be explored with a ranger guide.

The grassy ridges in the eastern part of Lake Mburo can be explored on horseback.

This activity is operated by Mihingo Lodge.

South of Rwonyo, the Lakeside Track climbs onto Kigarama Hill which provides a panoramic view of Lake Mburo.

This lake and seven more can also be seen from the equally dramatic Kazuma Lookout which lies at the top of a rather steep track accessed from the Ruroko Track near the Kazuma/Research Track junction. 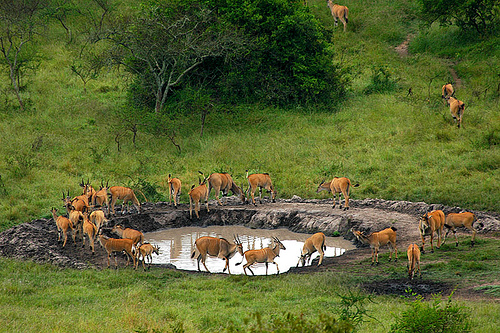 Prime areas for birding in Lake Mburo include the acacia woodland along the Acacia and Research tracks; the wooded shores of Lake Mburo as seen from the Rwonyo launch and the lake’s northern fringe of papyrus wetland. Outside the park Village visits

Most of the lodges in and around the park provide the opportunity to visit a local homestead and learn about traditional Banyankore life.

For information on park entrance and activity fees, please refer to the UWA tari? sheet at www.ugandawildlife.org.

Payments can be made using Uganda shillings, US dollars, British pounds, Euros, and Visa.