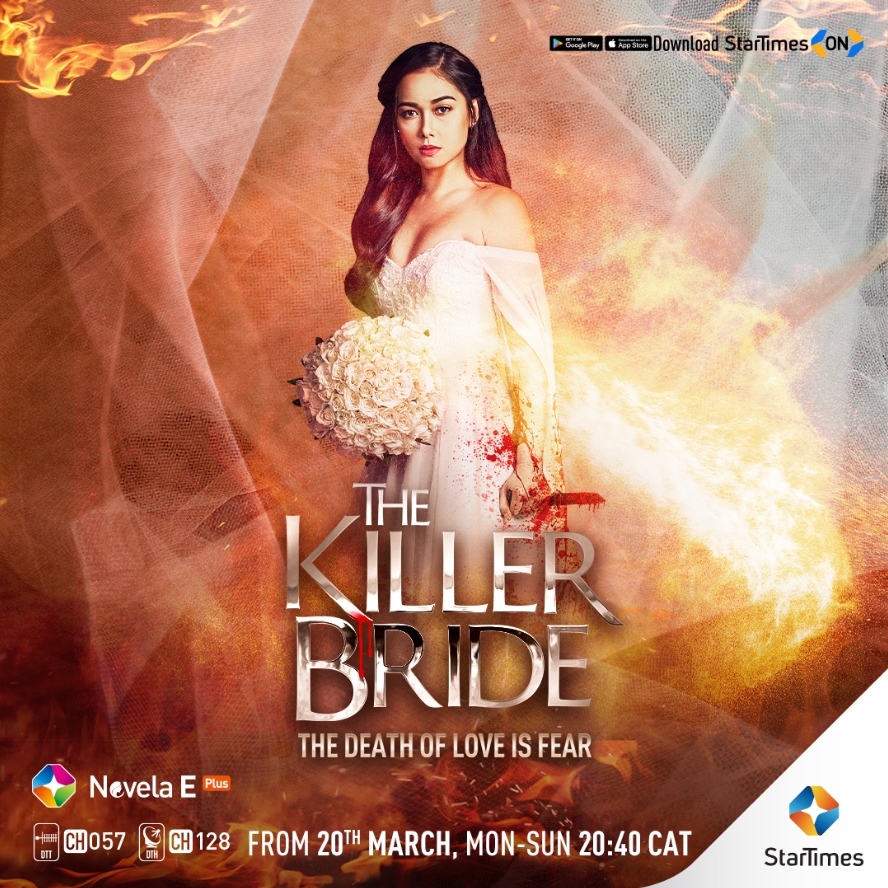 Being known for constantly broadcasting a variety of classical TV series, ST Novela E plus will have the most wanted drama this year, The Killer Bride, to meet the audience in Africa on 20 March, GMT 18:40 / CAT 20:40, an episode every day.

It is the very first time this Filipino TV series comes to Africa; and StarTimes is honoured to provide such a feast of visual to the audience, exclusively.

The story happens at Las Espadas, a place known for having the largest banana plantation run by two rival families the Dela Torres and the Dela Cuestas. But in this superstitious place, an urban legend also persists. At night, the spirit of a woman wearing a blood-drenched wedding gown is said to wander the town. Her name? Camila Dela Torre, the “Killer Bride”. Accused of murdering her fiancé’s sibling, she was put behind bars where she perished in a freak fire that engulfed the prison. With her dying breath, she cursed everyone who wronged her and swore to seek retribution. Years later, on the eve of an eclipse believed to be a sinister omen of bad luck, the Dela Torre family throws a huge celebration to ward off misfortune. Suddenly, a woman named Emma appears, claiming she is none other than Camila Dela Torre, with all her memories intact. Both unnerved and astounded, the Dela Torres take her in as penance for the horrible event that occurred all those years ago. Does this spell the start of Camilas promise of revenge?
Maja Salvador, the actress performed in Wildflower and Bridges of Love, as Camilla dela Torre in The Killer Bride wearing a burning wedding dress has sent the shivers. It gives much reason to wait for this out of the ordinary series, given that twist of tragedy and revenge. Maja had said this was even wilder than the Wildflower, given the premise that she would exact revenge as a wrathful spirit, after being killed in a prison fire.
“ST Novela E plus is always said to be the first choice for the fans of drama. The quantity and quality of international series shall both be ensured so that our customers can truly enjoy the freedom in choosing and leisure time with StarTimes. The Killer Bride is quite a typical one being expected according to the audiences’ feedbacks on our Facebook page, it is such a pleasure that finally we can fulfill their wish by having it broadcast on ST Novela E plus.” Said Isma Lule, the Marketing Director of StarTimes Uganda.