GULU – A human rights activist and former journalist Pat Robert Larubi has taken to the road to deliver the much needed sunscreen for people with albinism across the country on his motor bike.

Larubi, who started off his ride from Jinja on Thursday, went through Kayunga, Lugazi, Mukono and part of wakiso delivering his first batch of sunscreen.

This was followed by another whole day ride from Kampala through Kole, part of omoro district and finally making it to Gulu district where he made his final stop over.

“the lockdown came with a number of issues one was the ban on public transport which meant our people could not move nor access the much needed sunscreen. I had to device means to reach them because whereas other people cried for food, persons with albinism cried for sunscreen because it’s one of the essentials they need most to aid their survival,” Larubi said.

Given the fact that most of them live in remote villages he opted to take a ride simply to make sure he can access them wherever they are and secondly make sunscreen available and at no cost.

He says because of the lack of pigmentation. People with albinism may develop sores on their skin that could develop into skin cancer and by providing free sunscreen they are safe from the burden of having to worry about skin cancer.

According to Larubi, besides giving out the sunscreen the ride was also aimed at creating awareness under the theme #Action4Albinismon reaching out to communities even at this trying time when the majority of families and people with albinism felt neglected or abandoned to fate.

Of course the lockdwon had posed a very big challenge for people with albinism, their basic rights to access health care services had been put to a halt with a ban to Public transport.

Mirembe Elizabeth kwagala of Greater Luwero Albinos Association noted that they used to pick most of the sunscreen from their partners in Kampala and because of the lockdown, they had to bear the brunt of the sun and mastered to survive without sunscreen.

“When Larubi called and told me he was delivering sunscreen to the people with albinism under my care, I was moved by his action of riding on a bike all these kilometers and finally he delivered hope for us on his bike. Blessing for his action,” – Elizabeth said.

In Gulu, Lukwiya jonathan, a youth with albinism could not hide his excitement when he received his package of sunscreen. 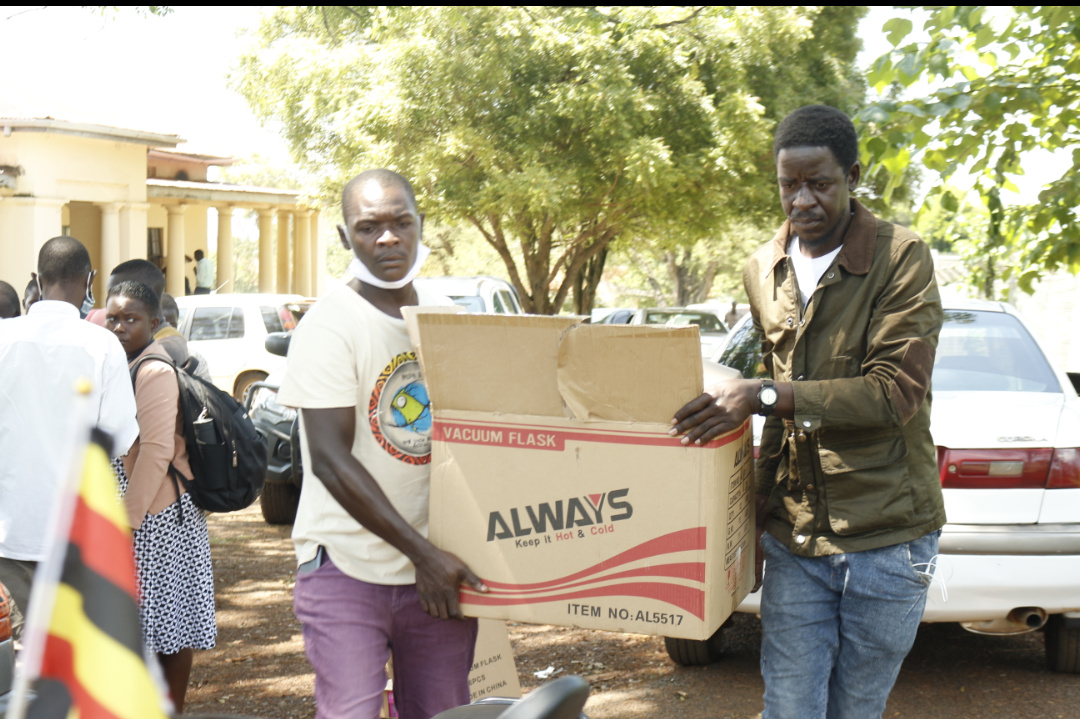 “I last got sunscreen in June of 2019 during a celebration to mark the international albinism day celebrations. I was lucky to have gotten more tins of sunscreen from a colleague who was leaving the country but I equally distributed it to my fellows with albinism. Now this ride by part is on a rescue mission for us to overcome the threats posed by lack of these essentials item” Lukwiya said.

According to Larubi, here he has been inspired to ride his back for all these kilometers after widespread calls and outcry for sunscreen, personal encounter and experience living with persons with albinism given the tough times that the country was going through.

However, this was the first time in a couple of years that Pat was taking such a long ride on his Bajaj Boxer reg number UEQ596P after he crashed with his Honda bike.

“I am not in a rush nor struggle to win a race, it’s a solo travel program so I will take my time on the road for the sake of my safety but also be able to reach safely and deliver the packages I am carrying to their finally destination – I am simply a messenger with a message to take home,” Larubi said.

Under his social inclusion campaign dubbed “Action4albinism”, Pat is raising awareness on albinism, creating awareness and building a support system for PWA in his solo expedition while are helping redefine lives of those who have been grounded by the impact of COVID-19.