KAMPALA – Commercial motorcycles or boda-bodas as they are fondly referred to may be swift and convenient for most Ugandans but alas! The speedy two-wheelers could be your next trip to heaven or hell.

According to Twaweza, a Non Governmental Organisation (NGO) that has a regional footprint across East Africa; 1 out of 20 citizens have personally suffered an accident in the past six months; half of them were from boda-boda accidents.

This accounts for 4 percent of the entire population that has so far been affected by the reckless motor cycle riders who dominate the streets of Kampala.

The recently released report further reveals that, 1 out of 6 people has had a household or family member who had encountered this nasty experience, which statistically comprises of 16% of the population.

And one out of eight citizens has a friend who has done so during this period of time. This accounts for 12% of the affected population.

On the flipside, two out of three citizens have no experience of any accidents or injuries in the past six months.

The police records also indicate that 500 of those cases are categorized as minor but a staggering number of over 100 cases are fatal in occurrence. All of these result from reckless riders.

Recent police statistics point out that of the 24,352 motorcycles, passengers and pedestrians who were severely injured in such accidents over the last three years, an astronomical majority, 16,000 victims occurred in the capital city, Kampala.

These fatalities on the road are quite alarming.

Every year, various stakeholders get together to celebrate the National Road Safety Summit.

The 2019 edition of the Summit is aptly themed: “Road Safety-Time for Action” that is aimed at bringing policy makers and other major road safety stakeholders to discuss actions towards improving road safety in Uganda.

Some of the major players include; Vivo Energy Uganda the corporation behind Shell Petrol Stations in Uganda, NTV Uganda, Ministry of Works & Transport and the Uganda Police have partnered for the second year in a row, to bring you the national Road Safety Summit under the theme: “Road Safety -Time For Action.”

The Summit is aimed at bringing policy makers and other major road safety stakeholders to discuss actions towards improving road safety in Uganda.

Bodaboda accidents are the leading cause of injuries in Uganda, that is according to research findings compiled by Twaweza.

The NGO collected data from various Ugandans who voiced their opinions and experiences on road safety.

This data comes from the Sauti za Wananchi brief titled: Health Check Ugandans’ experiences and opinions on health services. For this brief, data was collected from 1,913 respondents in the seventh round of calls to the Sauti za Wananchi panel, which was conducted within a ten-days period; between October 16 and 26 2018.

Below is a visual graph from Twaweza that depicts the extent of the road rage. 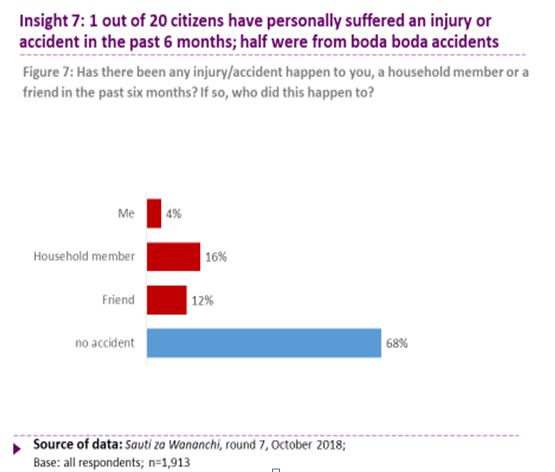 In half of these cases (53%), the accident was boda-boda related which implies that a motorcyclist was either a culprit or victim.

Other road accidents (25%) are second on the list, followed by smaller numbers who were attacked (8%) or fell (4%) 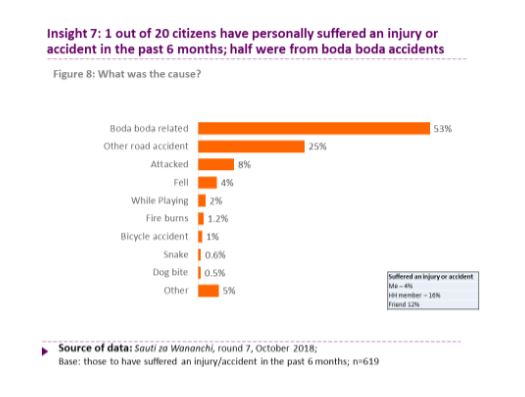 This is according to the latest release on findings by Twaweza in a research brief titled; Health Check: Ugandan’s experiences and opinions on health services that was released at Hotel Africana.

The media is always covering events that involve boda-boda accidents the most recent motorcycle accident that dominated national headlines calimed the life of Bobi Wine’s mucis producer, Ziggy Wine who tragically lost his life in August 2019 in an accident on a motor bike.

Kampala City Council Authority’s (KCCA) Head of Public and Corporate Affairs, Peter Kaujju, says there is a bigger plan by the city authority and the Works ministry to regulate the boda-boda industry within the metropolis.

“The government, through the relevant ministries and KCCA, are developing a plan to regulate the boda-boda business in Kampala. I cannot give details but what I know is that it would include having a limited number of boda-bodas and strict guidelines,” he said in a recent interview.

The Twaweza report notes that three out of ten Ugandans have experienced an accident or injury in the past six months, either personally (about 4 percent) or through a friend (about 12 percent) or a household member which stands around 16 percent.

In a separate accident that was covered by NTV which occurred on Tuesday June 4, 2019. One person identified as Vincent Sewankabo died on the spot and several others sustained injuries after a speeding salon car from Kampala hit two boda-boda cyclists at the Matanga trading centre which is located about 9kms from Masaka town.

According to the Southern region Police spokesman, Paul Kangave the driver tried to avoid a motorcyclist who had abruptly entered into the road.

As a result, the car (Toyota Wish) with a registration number plate; UBE 731D also overturned four times and in the process hit several other boda-boda cyclists and four pedestrians injuring all of them severely.

Several efforts have been made to educate and empower boda-boda riders in a bid to alleviate road accidents and HIV/AIDS in the commercial riders’ fraternity.

It has been stated that, ‘Motorcycle riders have a 34-fold higher risk of death in a crash than people driving. Unless urgent action is taken, the trend may worsen, resulting into more deaths’

Sauti za Wananchi lead researcher Marrie Nanyanzi during the launch of the report said the case of boda-boda accidents is on a rise but there is seemingly no strategy to curb it.

The report brief, which is based on data from Sauti Za Wananchi, which is Africa’s first nationally representative high-frequency mobile phone survey has its findings based on data collected from a total of 1,913 respondents across the country, which was conducted in October 2018.

The Uganda Police Force’s annual crime report indicated a 3.0% reduction in the number of crashes reported in 2018, fatal crashes however increased by 4.7% and serious crashes reduced by 6.8%.

Other causes of road accidents according to police include; careless driving, slapdash pedestrians, dangerous loading and driving vehicles which are in dangerous mechanical conditions among others risks.

The police report also shows that pedestrians are the highest category of road users who were killed at a huge 39% in 2018 totaling to 1,424, these were followed by passengers and cyclists at 28%, and drivers who account for in 6.0% of all road accident victims.

The annual crime report also indicates that 1,188 persons on the road sustained minor injuries in 2018 as compared to 934 persons in 2017 reflecting a 27% increase in road hazards.

Polly Namaye, the Deputy Police Spokesperson, in her speech at the lauch clarified it was Kampala Capital City Authority – KCCA’s mandate to regulate the use of Boda-Boda cyclists within the city and Kampala at large.
According to Ms Namaye, police is ensuring safety on roads especially through express penalties for those drivers and riders who are culpable.

She however, cautions all road users to be vigilant and pay extra attention while on the roads to avert potential accidents that occur on a daily basis on these communal routes.

Another key sector player, The Uganda Medical Workers Union Secretary General, Aggrey Sanya who was part of the panel at the report’s launch showed concern about riders who hide number plates after causing accidents and urged police to handle them expeditiously.

Records from the Traffic Police Department indicate that over 7,000 people were killed in boda-boda accidents within a two-year period from 2015 to 2017 in Uganda.

And over 60% of these victims who died on the roads were in Kampala, Mukono and Wakiso district which is the greater Kampala area. That area alone claimed a total of 4,200 lives within a short span of only 24 months.

“Every year, boda boda accidents in Kampala top our traffic data. Boda boda riders are killing and injuring passengers and pedestrians every day. We have realised most of these riders lack experience, training and many of them ride while drunk,” a senior officer at traffic data office said on condition of anonymity in an interview with Daily Monitor.

Police have launched a crackdown on errant riders because of the rising numbers of boda boda accidents.

He reveals that the traffic enforcement they have deployed overt and covert officers because riders easily spot uniformed officers and use all means to evade arrest.

The traffic team says they usually arrest 30 to 70 riders every day but some of them get released before going to court, especially those who get arrested over the weekend.

Police explains that the riders are often reckless; riding on pavements or from opposite sides on one-way routes and making unnecessary turns. They have also been seen on several occasions not stopping on traffic lights when their fellow road users like other motorists are halted by the lights.

He revealed to Daily Monitor in an interview that several bodies of riders and passengers are often picked up at Shell fuel station, opposite Shoprite, because most motorcyclists and their passengers are usually knocked dead there as they ride from Nakasero Market, Jinja Road, Kampala Road and Megha Standard plaza from where they join the Shoprite junction.

“Many of our colleagues have been injured or knocked dead while trying to dodge police, which arrests them even when they present documents such as riding licenses and helmets. At every junction, there are uniformed and plain-clothed traffic officers which forces us to ride on tension. You do not know who will arrest you or not,” Mr Kiviri asserts.

Mr Kiviri in an in interview with a local publication appealed to traffic police to focus on sensitising riders but also advised the enforcers to enable the riders acquire permits at a fair cost.