If you got it flaunt it. Hips don’t lie. Add the ‘political hips’ to the list. You can cheer or jeer Jennifer Semakula Musisi later—depending on which page of the life you are flipping.

Musisi is the Jenny from the block the new sensation that comes in the package of political hips and narcissist attention seeker. But we can’t entirely blame her.

Kampala is an opposition stronghold and any Museveni appointee in the city would get it rough. For the former Uganda Revenue Authority lawyer, things were even worse in April 2011: it was perceived her appointment was to frustrate Lord Mayor Erias Lukwago and help Museveni force his weight on the city since his NRM party couldn’t win Kampala mayoral elections.

Such was the hostile reception that a then fading Bobi Wine hit the studios and milked some good limelight in Kampala and other towns around the country with the song, Tugambire ku Jennifer, released in 2012.

The executive director of the Kampala Capital City Authority is alleged to be a born-again Christian. Picture that. She probably meets Fr Lokodo and Ronald Kibuule often enough. Again, picture that. Why am I slapping these men on Jenny’s political hips? Fr Lokodo is the sycophant who behaves like he invented morality long before Adam and Eve knew that what they had on their loins were not apples but… Lokodo likes going after women who dress up in a manner that causes overheating of the carburetor of men, but will say nothing about graft and abuse of office. I wonder what he thinks of Jenny…

And then there is this Kibuule, a man who once said some women deserved to be raped because they dress provocatively. Now, if Kibuule were a rapist, I don’t want to imagine what he would do with Jenny. But Kibuule is not a rapist and Lokodo is a feeble weather beaten hypocrite, so Jenny is safe.

Jenny, rejected and loathed, listened to the hymn, “where there’s a will there’s a way,” and drew a mental picture of herself. I don’t know if it is Robert Kalumba who came up with the raunchy advice but it appears to have worked.

Jenny now advocates extreme liberalism in politics and lifestyle. If you don’t like the potholes in the city, at least you like her potholes… er… hips. As you whine about Kampala’s choking traffic that gives no breathing space, at least you see some breathing space in the width of her hips.

It’s a win-win for Jenny whichever way you look at it. Morally, the perverted are having a field day with bathrooms; socially, she is the rave; politically, the political hips have lulled the animosity and left Kampalans confused on whether to complain about the poor drainage system in the city or just praise Jenny’s [whatever imaginary drainage system her hips conveys in your mind].

How many of you have forgotten to ask KCCA to work on drainage infrastructure during this dry season so that not many will need life jackets and boats to commute when the rains return in September? Hips don’t lie, huh? Aren’t you all duped into forgetting your problems because Jenny walks around with Kampala’s Eighth and Ninth hills on her body? 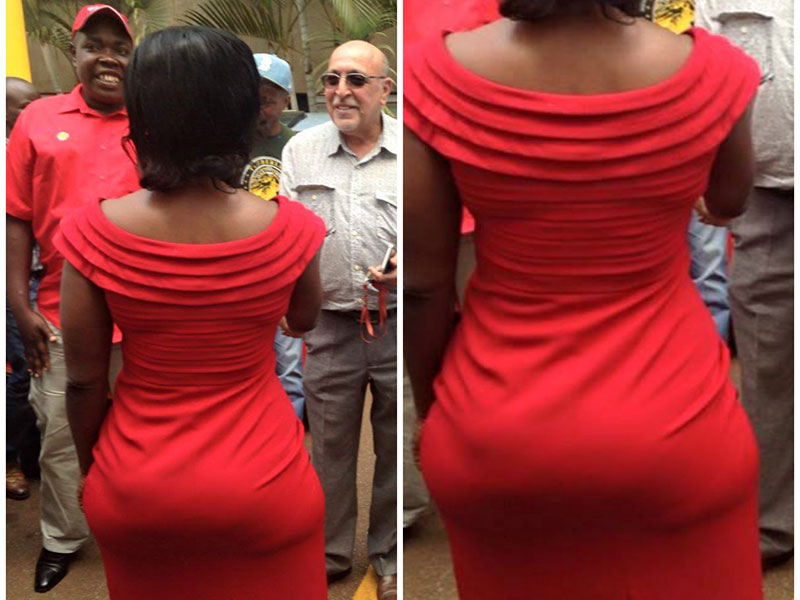 I was thinking that Kampala needs less bumpy and hippy infrastructure, literally, and more of real roads but then I remembered that it is still better to pocket at the sight of Jenny and pretend all is well compared to if the grotesque graffiti Beti Kamya calls eyebrows were the ones on display. I was thinking, women vendors will be happier to have better ways to earn in the city than see those political hips, but then I remembered that Jenny calls the shots.

But Jenny, like for real, what you were instructed to deliver to the people of Kampala is socio-economic service. The ‘socio’ bit in the instruction can also be written as ‘social’ but it has nothing to do with attracting the attention of Kampalans with hippy display of those political hips. Someone asked “so what? You want Jenny to wear a sack or move in a tent?”

Well, if wearing sacks will make Jenny more welcome to some of us then that is fine. Those low-lying humps she carries with a smiley burden, we have dealt with them before. The Luzindas and Nwagis actually thought they had arrived, thanks to those things. But while these others are ‘socialites’ who appeal to the teenage excitement on the menu, Jenny is a cuff-link material. A corporate dresses up to her image. Isn’t that why the drub ministry that is located near coffin makers in Wandegeya came up with the public dress code yesterday?

Jenny, you know what? The other day I went for my childhood crave. Dreads. I did that and looked cool. Or so I thought. My peers said I had missed a stage in life. One can always ignore what others say and focus on themselves, so you can ignore critics of your political hips and even up the ante in your wardrobe melodrama. Kampala likes it. You are serving them pills that they pop and forget about their problems. The magic of the political hips.

Looking back, I see how First Lady Janet Museveni has commanded respect of the people all her life. Her public image will always remain that of utmost civility. Is the gulf between a presidential appointee to the capital city and the presidential appointee to education ministry that big, Jenny? Okay, you are Jenny, not Janet. That, we understand, but you are still a woman. No woman  chasing their 50s with even half the weight of your office seat should be dressing in a manner that becomes the attention of the public. Those things belong to the Zaris. For Jenny, the risk is  competing with your granddaughter for attention. Being a flower child can cause such problems.

Jenny, you are accentuating your body figure in your wardrobe choices but then again, there are women with diastema (kazigo), considered a symbol of beauty in Africa but we don’t see them grinning like overloaded camels in the desert just so we can take note of their dental wonders. There are women with dimples, one of the greatest facial deformities known to man, but you won’t see them smiling at passing flies just so we can notice their cheeky wonders.

Jenny, a dress can do a lot more wonders than your latest crave is shrouding. Many outfits can show those hips but some make them provocative. Did you know that one of the most prized items on a woman’s body that can keep a man’s attention away even if it was raining money is the nipples? But thanks to bras, they are tucked in well. If the hips lose their magic, God forbid if Kalumba advised you to play the nipple and you went for it.

Lest I forget, a mini-survey aped by The Suited Penguin on social media showed that six-in-ten women in Kampala are well endowed on the hips, only that they don’t politicise theirs.