THE SUITED PENGUIN: Bobi Wine, go on, grab that Sh200 million MP car cash with three hands and a tooth

Around 2008, a freeter me tossed one of those freebie corporate invites at Swayz Club. Swayz was the hippie club for youngsters, by a youngster (Rajiv Ruparelia). I bought a bottle of water and idled around, sipping the 300ml content to last long enough for Ugandans to expect Museveni and Besigye to announce a joint press conference to admit they should never have stepped in Kyaddondo to challenge you.

Then a group of roughshod stormed the club like they owned it. I recognised one of them. It was you. Your group took up a corner. Something dragged my lazy feet that side. Mistake. The way you sprung from where you were sat and charged at me, it was as though you had caught Barbie giggling under my whispers.

That night, Buchaman stepped between us and whisked me away. Learning I was from New Vision, he apologised on your behalf. “Boss is too high, you can’t come close to him now,” he had said. I had left that corner wondering what in the world gave you the right to attempt to assault anyone like that. I didn’t like you, and that incident made me dislike you even more.

Ironically, Bebe Cool, though appearing arrogant in public, cut it out differently when I walked up to him at Kyadondo Rugby Ground during a Corporate League outing. He was alone and idle. We shook hands and exchanged pleasantries.

However, your true self happened in 2015, four years after I had decided that the son of Kaguta had outlived his usefulness in my voter life. You had emerged above self to stand with the face of desire for change that is Kizza Besigye, and the people. You shunned the offers to rally support for the incumbent, saying the ghetto youths needed a future that is today and not tomorrow.

I realised then that Moses Opobo and Joseph Ssemutooke were right all along. That you were the voice that we needed to inspire the youths. Many of the celebrities under the ‘Tubonga Nawe’ banner arrogantly rejected public demand to apologise, saying they had made themselves what they are. That the fans, the people who paid to make them big, had to shut up and go to the shamba and pay more taxes… you chose to commiserate with Besigye during his house arrest and persecution in court. These endeared me to you. I was even ashamed for having not known this side of you much earlier. 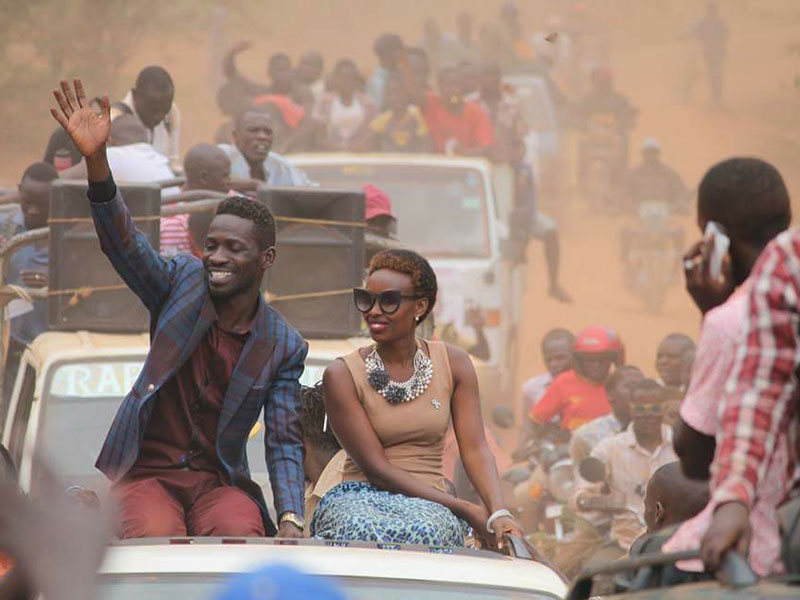 And now we all celebrate and live with so much hope and inspiration, all thanks to your historical victory in the Kyaddondo East by-election. There were three ‘presidents’ with serious interests in the race, but there was always one ‘president’ going be the true ghetto leader.

I don’t want to go into whether you will address yourself as ‘HE Honourable’ or ‘Honourable HE’ or whatever, but allow me beseech you to go and visit the people of the two wards, sujui Kitti A and Kitti B, where you lost. Let them know you need them on board to deliver the people to their dreams.

Everyone is expecting you to literally spoon their lives. Bonny, a village chief in Magere says he expects a massage off your fingers. Don’t be shocked if Atwiine from Kasangati claims that you promised a lot but couldn’t even help withdraw the condoms from his scrotum after his binge in the ghetto. Such is life. You are not there to remove that rubber but to help them know how to do it themselves.

And before I run, you once said you would object the Sh200 million car cash if you were an MP. Now you are one. No need going through pain if chaps start sharing screen grabs of that Facebook post from August 2016. Just go and pick that cash. Even ask for more. Take Barbie out, do her hair. She has been running it in the dust so much. She needs the pampering because she has earned it.

Knowing Barbie, she will prefer to pick her hoe and do the kitchen garden, carry entula home for lunch and such. She will say she wasn’t stomping the din and dust in return for a treat. Hear none of it, just drag her to some exotic saloon and give her the complete treat. That should ‘eat’ away some Sh20 million or so. I don’t really know. I am a man who bites my finger nails and shave myself under a small tree in the compound.

The balance is still huge. Now hit the ghettos and invest in the people that money. You got more cars than you need anyway. That money belongs to the people. It’s their sweat. It’s good to pick and even better to use some of it for the people.