Global conference kicks off in Kenya, draws hundreds of leading women in media 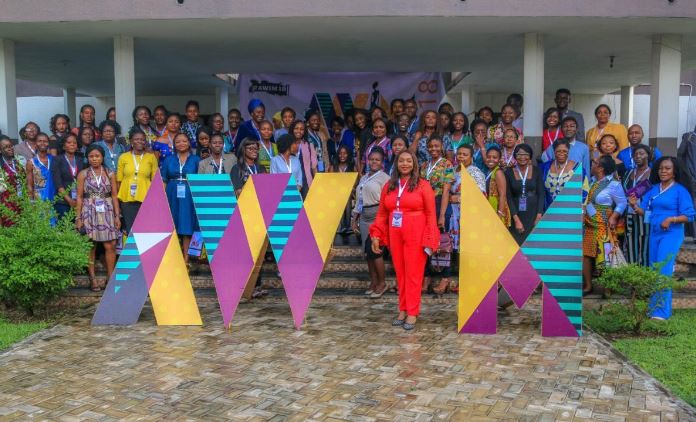 NAIROBI, Kenya – All roads led to the Kenyan capital Nairobi as the African Women in Media (AWiM) kicked off Thursday, July 25 through Saturday, July 27, with hundreds of leading women garnered to discuss the future of tech and media

Held under the theme SHOWCASE, this year’s conference sets out to tackle urgent issues facing women in media, and media in Africa more widely in a drive to recuperate objectives that are in line with the African Union’s Agenda 2063 Aspirations 3 & 6, and United Nations SDGs 5 & 10,

African Union’s (AU) Director of Information and Communication, Leslie Richer, set out to implore women to be disruptive and stay integral in content development and media in Africa while appreciating transformation achieved.

”As we reflect on ourselves here in the media segment, I implore women to step up to plate and own oversight on editorial and media content development and garner resources to become media owners,’’ said Ms. Richer

The pen is still stronger than a sword, and in today’s world where the pen is replaced by tech, we should still use the technology to change the African narrative to the rest of the world” added Ms Richer 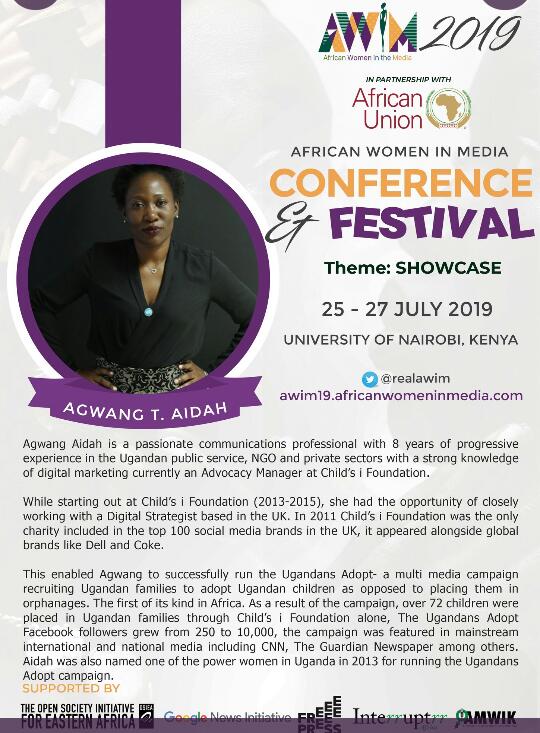 Named one of the power women in Uganda in 2013, Ms Agwang will present on running a successful multi-media campaign on a budget for an NGO will citing the Ugandans Adopt campaign run by Child’s i Foundation.

”The ‘Ugandans Adopt’ multi-media campaign set out to change the hearts and minds of Ugandan individuals and families to adopt abandoned Ugandan babies as we build a nation stemmed at family support systems,’’ said Ms Agwang

On gender inequality in media at tech, Ms Agwang further highlighted a stance on the role women play behind the scenes.

‘’As women working with and in the media in Uganda, we are often left in the background. Platforms like The African Women in Media conference give us the opportunity to not only showcase our achievements but to also network and learn from other like-minded women in Africa,’’ added Ms Agwang.

“Often, the experts that are used as news sources are mostly predominantly men …It’s all about whose voices have been heard and used to develop agendas,” Dr Akinbobola told KTN News’ Michelle Ngele during an interview at the Nairobi based television station.

“We have panels on media topics such as violence, police making, global innovations in the media, misinformation and fake news among others and they will present the women as experts on those topics,” Dr Akinbobola added on the ongoing conference

The categories include Free Trade-in and migration in Africa, Women and Free Trade, Free Trade and Sustainability, Silencing the guns in Africa with the best pitch for each category set to receive a $2,000 production grant!!!

“We have the AWiM Pitch Zone where participants will be able to pitch stories to organisations in order to win $2,000 (UGX7,500,000) to produce the stories,” Dr Akinbobola said, adding that international media outlets such as BBC and CNN will also commission stories that they like.

About African Women in Media (AWiM) 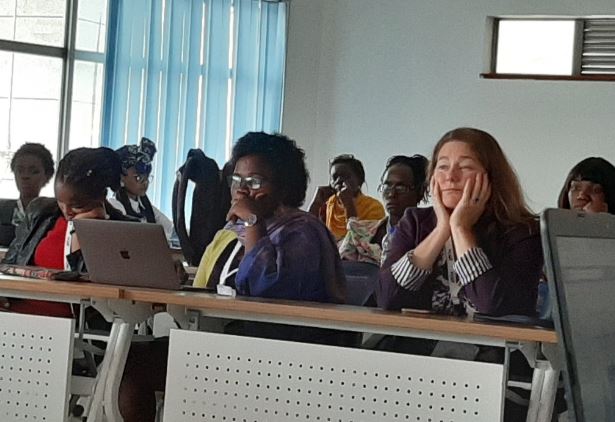 African Women in Media (AWiM)– was set up in 2016 by award-winning journalist Dr Yemisi Akinbobola as a supportive network for women in media. Since then it has grown from a small Facebook group to a huge network and platform for women in media to inspire, support and empower each other.

Every year, AWiM hosts a conference and festival that brings together the best women in media from across the continent offering learning opportunities, speed mentorship and exhibition opportunities for those interested.

This year’s conference and the festival is ongoing at the University of Nairobi from July 25 to 27. The theme for this year’s festival is “Showcase” as this year’s objective is to showcase the amazing work produced by African women in a variety of media industries from film, journalism, marketing and more.