Excitement as Huawei ICT academy is launched at Makerere

KAMPALA – ICT and National Guidance minister Frank Tumwebaze has called for equipping of students with hands-on skills to enable them fit into this fast growing economy.

Tumwebaze was speaking during the launch of Huawei ICT Academy at Makerere University last evening.

The function also doubled as the flag off ceremony for ten students flying to China for three weeks’ training at Huawei under Seeds for the Future Program.

Mr. Tumwebaze advised all universities to train students on becoming job creators and not job seekers by equipping them with practical skills before they graduate.

This, he said would enable students to commercialize their skills and earn from them after campus.

“It has come to our notice that most students study for the purpose of graduating and leaving Universities but lack practical skills. This is why the Ministry of Education and Sports is now focusing on universities equipping students with skills and not theories alone,” Mr. Tumwebaze said.

Giving an example of Mr. Ren Zhengfei the founder of Huawei, Mr. Tumwebaze stressed the audience to commercialize their skills so as to benefit from them.

“The Huawei founder realized his skill and worked on it and today his company is earning him billions of money. That’s what young Ugandans should do. When you realize that you have a skill, do not sit back; work hard to improve on it and it will earn you more than you expect,” he said.

Deputy Chief of Mission of the Chinese Embassy in Uganda Mr. Chen Huixin, who spoke on behalf of the Ambassador,
revealed that Huawei has been carrying out its businesses in Uganda since 2001.

He added that Huawei joined the Buy Uganda Build Uganda (BUBU) campaign in order to promote Uganda’s products and that the Seeds for the future program will produce good yields for Uganda.

He emphasized teamwork among members if any progress is to be made, noting that Huawei has reached its current level because of teamwork.

He challenged the audience to end digital illiteracy by educating others about ICT because it is one of four pillars one looks for in prospective employees.

“With technology skills, Uganda will develop at a very fast pace, which will enable the country to join other middle economy countries.”

Makerere VC, Prof. Barnabas Nawangwe called upon the students as primary beneficiaries to take advantage of the Academy because they are the hope for the future.

“Makerere University values the support given to its students by Huawei and given the chance; we are willing to take on even more opportunities.” 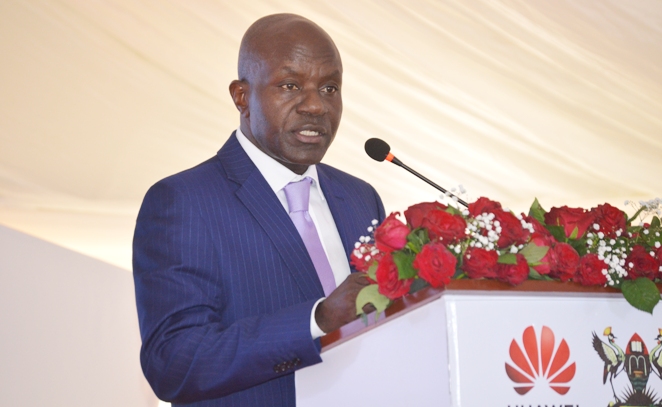 The Permanent Secretary Ministry of Education, Mr. Alex Kakooza applauded Makerere for starting up the Confucius Institute which has opened new doors for Ugandans to learn Chinese.

He revealed that the Ministry is ready to work with Seeds for the Future in Makerere and other Universities and called upon students to participate in the in the Huawei ICT Academy activities.

“You will never reach your full potential unless you learn how to serve others,” the Principal College of Computing and Information Sciences (CoCIS) Prof. Tonny Oyana advised.

This, he said to the 10 successful Seeds for the Future students who were being flagged off to China for their trip.

Prof. Oyana informed the audience that the Huawei ICT Academy was initiated in September 2018 with the aim of training and equipping 1,000 Ugandan students in two years.

He added that Huawei donated equipment worth 30,000USD and will make a 15,000USD annual cash donation to the gazetted resource Centre to be hosted at CoCIS.

“The aim of the Huawei ICT Academy is to partner with Universities to encourage students to gain skills in the practical field of technology over the next two years,” said the Managing Director Huawei Uganda Mr. Liu Jiawei.