KAMPALA–GUANGZHO – The Ministry of Foreign Affairs of the Republic of Uganda and the Uganda Consulate General in Guangzhou, in collaboration with the Jiangmen Municipal People’s Government, of the People’s Republic of China convened a one – day virtual Investment Conference on April 15, 2021. The sole objective of this conference was to woo Chinese investors to explore viable investment opportunities in Uganda.

The Investment Conference also aimed at strengthening economic and commercial cooperation between Uganda and Jiangmen City. In particular, it is intended to:

• Highlight the investment opportunities and incentives in Uganda. Particular focus was business opportunities in the Mining and extractive sector

• Create awareness and generate interest among business enterprises in Jiangmen City to invest in Uganda.

• Provide a platform to exchange ideas on suitable approaches for encouraging investments from Jiangmen.

In his remarks, President Yoweri Museveni underscored the excellent and historical bilateral relations between Uganda and China, which paved way for the Investment Conference.

The President further highlighted that Investment in the mineral sector has been improving with various Chinese enterprises such as Guangdong Dongsong, which established an industrial park focusing in Mineral development, and plans to produce phosphate fertilizers, cement, rare earth elements etc. There is still a huge opportunity in the investment of mineral development, given the demand for these mineral products in most of the manufactured products.

President Museveni called on the participating enterprises to use the opportunity provided by the Conference to take keen interest in the opportunities presented and consider Uganda as an investment destination. 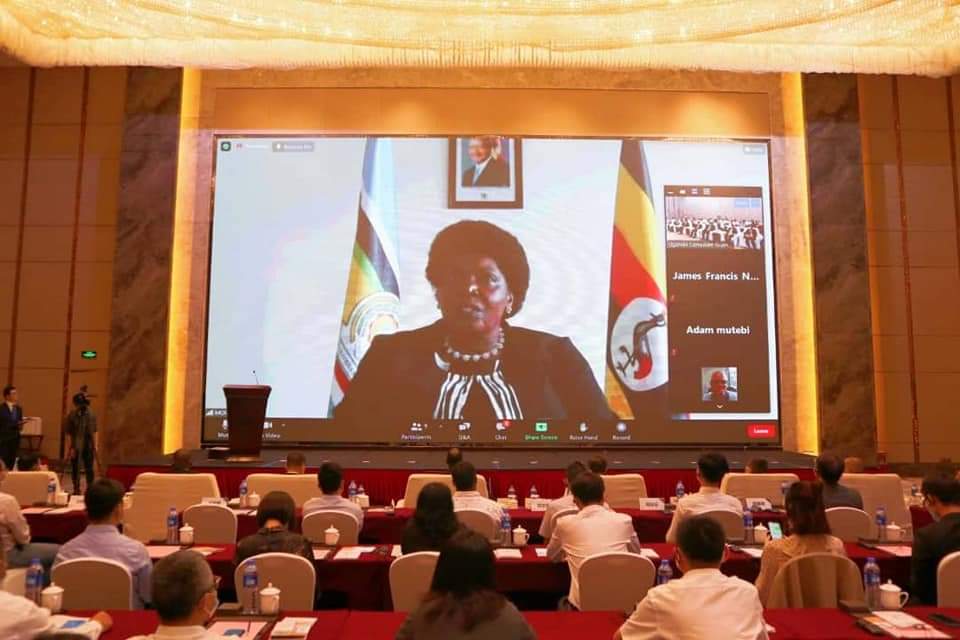 She further reiterated this Investment Conference is line with the Ministry’s deliberate policy of Commercial and Economic Diplomacy that aims at pursing and consolidating an avenue for Government of Uganda to increase International trade and to stimulate the National economy which will eventually led to industrial transformation and economic development.

Mrs. Onek underscored that the Investment Conference seeks to attract business enterprises mainly in the area of mining and mineral value addition in Uganda. He noted that Uganda is home to several mineral types such as metallic minerals such as (Gold, Cobalt, Iron, Copper); industrial minerals (graphite, marble, limestone) and gemstones. Currently the government through the Ministry of Energy and Mineral Development has identified 18 potential mineral targets for mineral exploration in Uganda.

In his opening remarks, Amb. Solomon Rutega, Uganda’s Consul General to Guangzhou In his remarks, the Consul General highlighted promotion of economic and commercial cooperation between Uganda and China as the central objective of the Consulate’s work. This effort involves “attraction of foreign direct investment in Uganda’s strategic sectors; increasing the number of out-bound Chinese tourists to Uganda; and increasing productivity and expanding the export base to the Chinese market”.

He also expressed Consulate’s commitment to provide all the necessary support to enterprises wishing to travel to Uganda to further explore existing opportunities, as soon as the Covid-19 situation is addressed. He added that a Business Delegation to Uganda would be a good first step.

Officials from the relevant line Departments and Agencies notably Mr. Martin Muhangi representing the Uganda Investment Authority informed the Conference that for the last 10 years, China has been the leading source country for investments into Uganda. This is made possible through the various opportunities and incentives that Uganda government has offered in the area of manufacturing, agriculture/agro-processing, mineral development, energy and tourism, to mention but a few.

He also noted that Chinese firms have established several industrial parks which have attracted various companies. In the area of agro-processing, a company called Ho&Mu has established a factory that is processing fruits for export to China; Goodwill Ceramics with an investment capital of US$30m is manufacturing building tiles which now saves Uganda US$35m that would have been otherwise spent to importing tiles. The two factories employ over 3,000 skilled and non-skilled employees.

Presenting on behalf of the Ministry of Energy and Mineral Development, the Principal Geologist, Mr. James Natukunda, informed that the mining industry in Uganda is under the oversight of the ministry of energy and mineral development was at peak levels in the 1960’s when the sector accounted for up to 30% of Uganda’s export earnings. With a favorable business climate in Uganda for over 2 decades, many mining companies have taken up licenses in the mining sector. Over the last ten years the sector has been growing positively with growth rates peaking 19.4% in FY 2006/07. In FY 2009/2010, the sector grew by 12.8%. In terms of licenses taken, in 1999 there were 66 licenses issued in the exploration and mining license categories combined; since then more licenses issued to date.

Mr. Natukunda underscored that the mineral resources have been identified and are already being informally mined in the different parts of the country areas; there are several mineral potential formations most especially gold in the Karamoja region and other areas, copper in Kasese, extensive marble formations in Eastern part of the country (Moroto), phosphates in Tororo and huge deposits of iron ore in central Uganda. New iron smelting factories are being set up and government’s negotiation for iron ore mining is underway and commercializing the mineral is key government priority.

He further emphasized that the Mining Sector presents opportunities that are metallic and non-metallic minerals which interested investors from Jiangmen and the whole of China can prospect and mine. Recent geo surveys and mineral resources assessment under Sustainable Management of Mineral Resources Project (SMMRP2012) identified potential mineral target areas for exploration and development that include:

Diatomites in Pakwach area – Diatomites have been formed in the Quaternary beds of the Western Rift, on the western side of the Albert Nile. 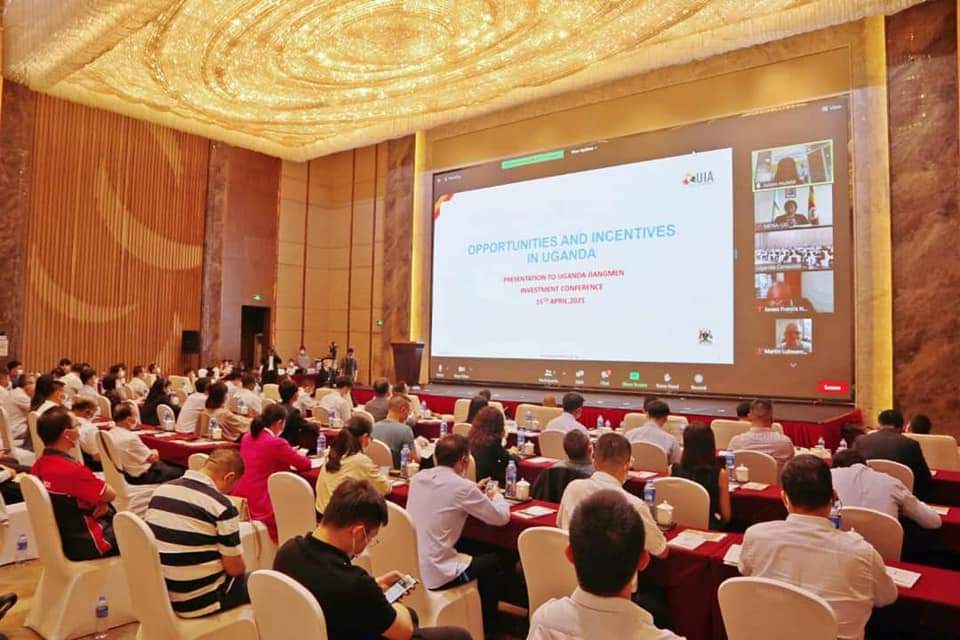 Kaiso kaolin and bentonite clays
Mayuge iron ores – There are ironstone prospects outside the town of Jinja in Lake Victoria
Gold Potential in:

• Kitaka –Buhweju area, West Nile – Arua – It has been postulated that the Kilo-Moto gold fields in the DRC extend to Uganda, since similar Archaean greenstone formations have been observed in the West Nile.

• Kaliro-Ivukula gold in quartz veins – In the south Eastern Part of Uganda (Kaliro) gold has been detected in weathered outcrops of Archaean gneisses in connection to quartz and dolerite veins with indicative grades of up to 2 ppm gold.

• Hoima area stream sediment survey (gold potential)
Mr. Cai De Wei, the Vice Mayor of Jiangmen Municipal People’s Government conveyed a message of gratitude to the Uganda Consulate in Guangzhou and the Ministry of Foreign Affairs in Kampala for undertaking this initiative. He further informed that the Jiangmen City Authorities, and the different business men are willing to engage further with Uganda to contribute further to the development of the Textile industry.

Mr. Wei expressed commitment by the City of Jiangmen to continuously explore and deepen exchanges and cooperation with Uganda in the fields of economic trade and investment, tourism, agriculture, health, construction and people-to-people exchanges.

The Conference was attended by the of Leaders of the Jiangmen Municipal City Bureaus, Businessmen and women from Jiangmen, representatives from the Ministry of Foreign Affairs, , Officials from the Uganda Missions in China, Uganda Investment Authority; Directorate of Geological Survey and Mines, Ministry of Energy and Mineral Development; and Uganda Chamber of Mines and Petroleum, and members of the Business community in Uganda and China.