KAMPALA — For the last six years or so, siblings, Rajiv Ruparelia and Sheenah Ruparelia have spent time under the tutelage of their property mogul and billionaire father, Dr Sudhir Ruparelia.

After his Bachelor of Business Administration degree at Regent’s University, London, where he majored in Financial Management, Rajiv returned home in 2014, to take up a variety of roles within the Ruparelia Group. In 2017 he was elevated to the Group Managing Director role- where he is in charge of the Group 28 businesses and over 8,000 people.

Sheena, too, after completing her Economics and Accounting degree at the City University, London, joined the Group, first as the Business Development Manager of the former Crane Bank until 2016 when the bank closed. In 2017, she then joined the Group as a Director. She is mainly involved with the hospitality and property arms of the Group.

In a recent interview South African based online magazine, www.billionairetomorrow.com, the senior Ruparelia said the duo are now part of his decision-making machine, especially on investment matters.

But after years, of working within the group, Sheena and Rajiv wanted to do a project of their own. Like they say, the apple does not fall far from the tree, the duo decided on investing in real estate. Besides being so deep into it as part of their day-to-day job, Rajiv is crazy about building things, while the camera-shy Sheena is more passionate about spatial designing and planning.

So real estate was only natural. 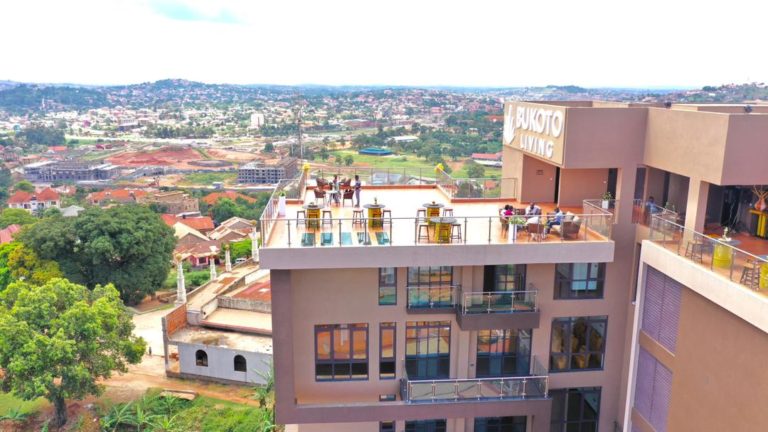 But rather than go the usual Meera Investments build-to-rent, direction, they chose the build-to-sell— a direction that would leverage the group’s experience in the real estate industry as well as the economies of scale that come with it, to give their prospective customers, a chance to own well-planned and world-standard homes in prime locations within Kampala.

And this is how Bukoto Living was born.

Hatched around 2018, Bukoto Living is a 9-floor condominium homes project- altogether, 27 homes in a 2-3-4- and 5-bedroom configuration. Perched on raised ground, in Bukoto, just at the border with Ntinda and Naguru, Bukoto Living commands views of Naguru, Nakawa, Ntinda and surrounding areas.

The affluent suburb of Bukoto is a mixed residential and commercial area, with a large number of small businesses, NGOs, supermarkets, hospitals, schools and upscale shops. Bukoto Living itself is built just about 150 metres from the main Kira Road, placing the central business district within just 20 minutes.

The project, whose construction started in 2019, was officially unveiled today. A significant portion of the homes, we understand, has already been bought.

The building will be managed by Meera Investments and Crane Management Services, the property development and management arms, respectively, of the Ruparelia Group.

Bukoto Living, according to Sheena Ruparelia, features, large floor-to-ceiling patio doors leading to appropriately sized balconies. This lets in plenty of sunlight and commands panoramic views. The spacious open-plan kitchen/living/dining area, together with a separate laundry area, pantry and maid’s quarters with separate access have been optimised for both style and ergonomics thus increased productivity.

The 2-Bedroom Apartment– the most affordable option, comes with 160 sqm of space split into 2 bedrooms, a kitchen, living room and dining as well as an additional room for the housekeeper/Maid and a 12 sq/m balcony, that opens up to beautiful views. This one costs USD 168,000.

The 3-Bedroom Apartment offers 200 sqm of space. On top of a 27 sqm Master Bedroom and a further 2 double bedrooms, it also comes with an equally spacious living room, kitchen, maid’s room and balcony. The 3-bedroom apartment costs USD 210,000.

Consisting of 315 sqm of space, the 4-Bedroom Apartment has a large master bedroom (38sqm) and an equally spacious open kitchen-living area. The other three bedrooms are equally large. It also comes with two balconies and a maid’s living room and goes for USD 330,750.

Well-planned spaces; value for money: Bukoto Living, features, large floor-to-ceiling patio doors leading to appropriately sized balconies. This lets in plenty of sunlight and commands panoramic views. The spacious open-plan kitchen/living/dining area, together with a separate laundry area, pantry and maid’s quarters with a separate access have been optimised for both style and ergonomics for both comfort and increased productivity.
The 5-bedroom penthouses offer 2-floors and 345sqm of luxury. Everything about this version is large- a larger than life 53sqm Master Bedroom and four other equally large bedrooms, two of which are also self-contained. The 61-sqm open plan kitchen/living/dining area is as big as it gets. This version comes at USD362,250.

Rajiv, says that Bukoto Living is an “iconic property in an excellent location, with efficient layouts and beautiful world-class finishes.”

“With particular attention to other onsite amenities, such as landscaped gardens, an entrance lobby with a security desk, provision for Wi-Fi internet connection, a duplex passenger lift and a 24-hrs standby generator, compelling demand for this world-class property is assured. This builds a solid foundation for up to 9% anticipated return on investment and potential for healthy capital appreciation,” he says.