It is the first time that total Internet subscriptions in Uganda have crossed the 20 million mark, suggesting that nearly one in every two Ugandans has Internet access.

During the quarter under consideration, broadband cellular subscriptions grew by 1.2 million connections from 18.9 million at the end of June 2020 to 20.1 million at the end of September. This is coming on the back of the disruption occasioned by the COVID-19 lockdown from March to June shows significant recovery, which cuts across all major market segments highlighted in the quarterly market performance report.

This growth is mainly attributed to the shifting work culture driven by the COVID-19 pandemic, which led many businesses to adopt remote working methods, says the report covering July – September 2020.

In the same vein, there were more than 1 million new mobile subscriptions in the months of July, August and September 2020 as the market topped 26.5 million fixed and cellular subscriptions, equaling the pre-COVID-19 subscriber count of December 2019.

In terms of year-on-year comparison, the sector posted a 3.3% growth in subscriptions between September 2019 and September 2020, despite the 3 million subscriber erosion between March and June 2020 at the onset of the COVID-19 pandemic.

“Amid the sector-wide disruption over the last six months, the sector averaged quarter-on-quarter growth rates of 1% over the last 12 months. This comparatively subdued performance is largely attributed to the 11% subscriber drop in the months April-June 2020,” the report stated. 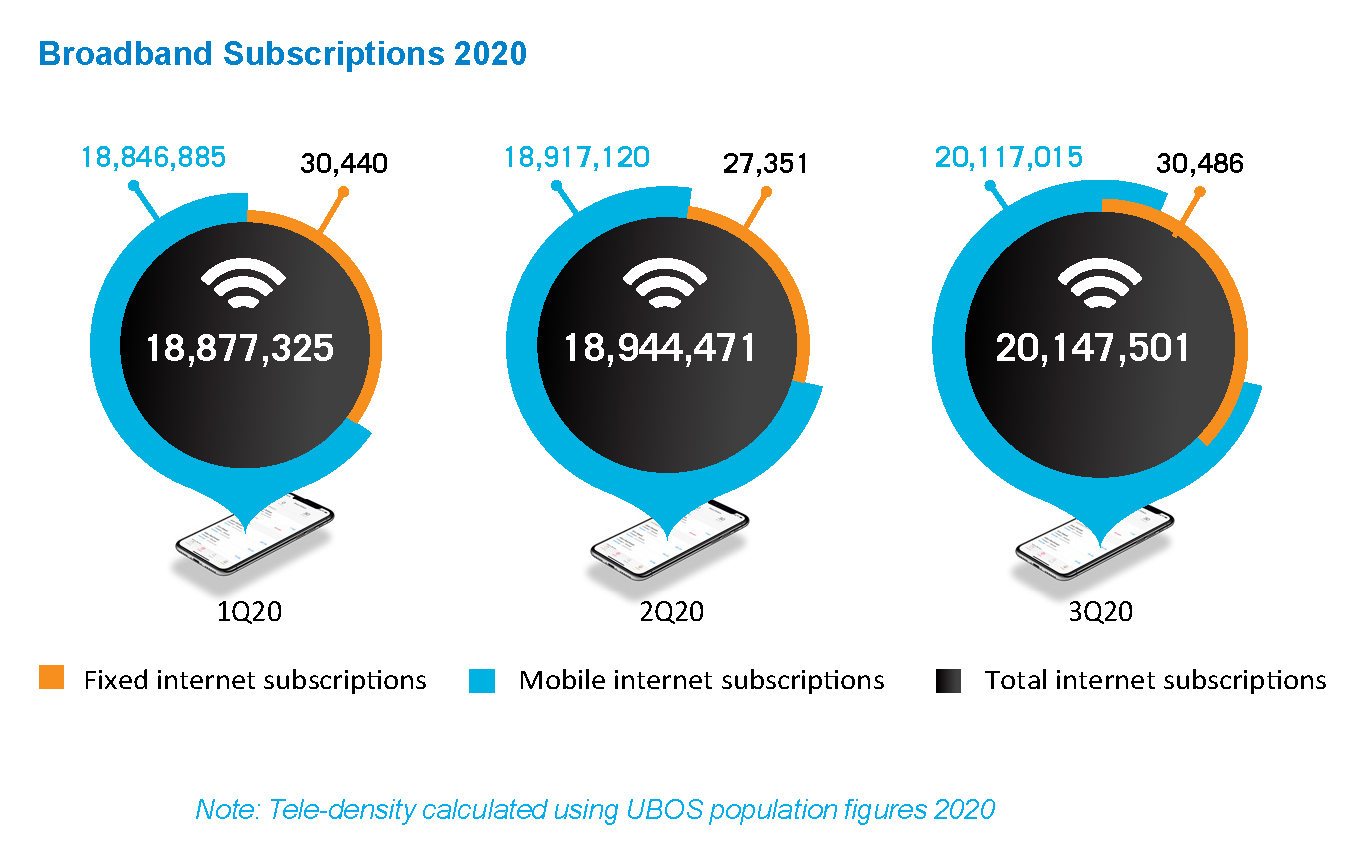 The current subscription figure translates into a national telephone penetration of 64 lines for every 100 Ugandans.

At 1.8 million newly registered accounts between June and September, mobile financial services led industry-wide product growth, jumping from 25.9 million subscriptions at the end of June 2020 to 27.7 million at the end of September 2020.

Besides, the Ugandan mobile money landscape continued to present a high conversion rate from registration to account activity. At the end of September 2020, 81% of all registered money accounts had partaken in at least one billable mobile money transaction in the 90 days preceding September 30, 2020. This translates into a 7% quarter on quarter growth in active wallets.

New subscriptions mainly led the growth in the period under review in contrast to reactivation-led growth witnessed in the period April-June 2020. This observation is significant given the number of first time mobile financial service users in the market.

However, the report points out that the growth in mobile financial services came along with consumer protection challenges, with new consumers especially being susceptible to fraudulent schemes orchestrated by both unscrupulous individuals and agents.

This realisation is in line with market research conducted by Uganda Communications Commission (UCC) and Innovation for Poverty Action (IPA) in the period 2019-2020, which showed that more than 40% of customers surveyed reported a money-related consumer challenge. This ranged from agent overcharging, unclear/unexpected fees to incorrectly sending money. Moreover, 61% of the consumers surveyed took no initiative to seek redress.

During the quarter under review, MTN Uganda, having complied with the new licensing regime obligations, was successfully migrated and issued with a National Telecommunications Operator (NTO) license in July 2020.

This followed extended industry consultations towards revising the national telecommunications licensing regime in Uganda that led to UCC issuing a new licensing framework.

Uganda License Zones
While other market segments registered significant growth under the circumstances, total active pay-TV subscriptions contracted from 1.56 million accounts at the end of June 2020 to 1.54 million at the end of September 2020. Despite the resumption of major sports leagues worldwide, the subscription TV market’s suppressed performance may be attributed to the challenging economic climate that left many consumers financially constrained following lockdown. Even with some business activity restarting, household pay-TV subscriptions might not be considered a priority for households facing economic challenges.

However, while the COVID-19 lockdown brought many businesses to their knees, the pandemic has spotlighted technology’s role in the public health domain. 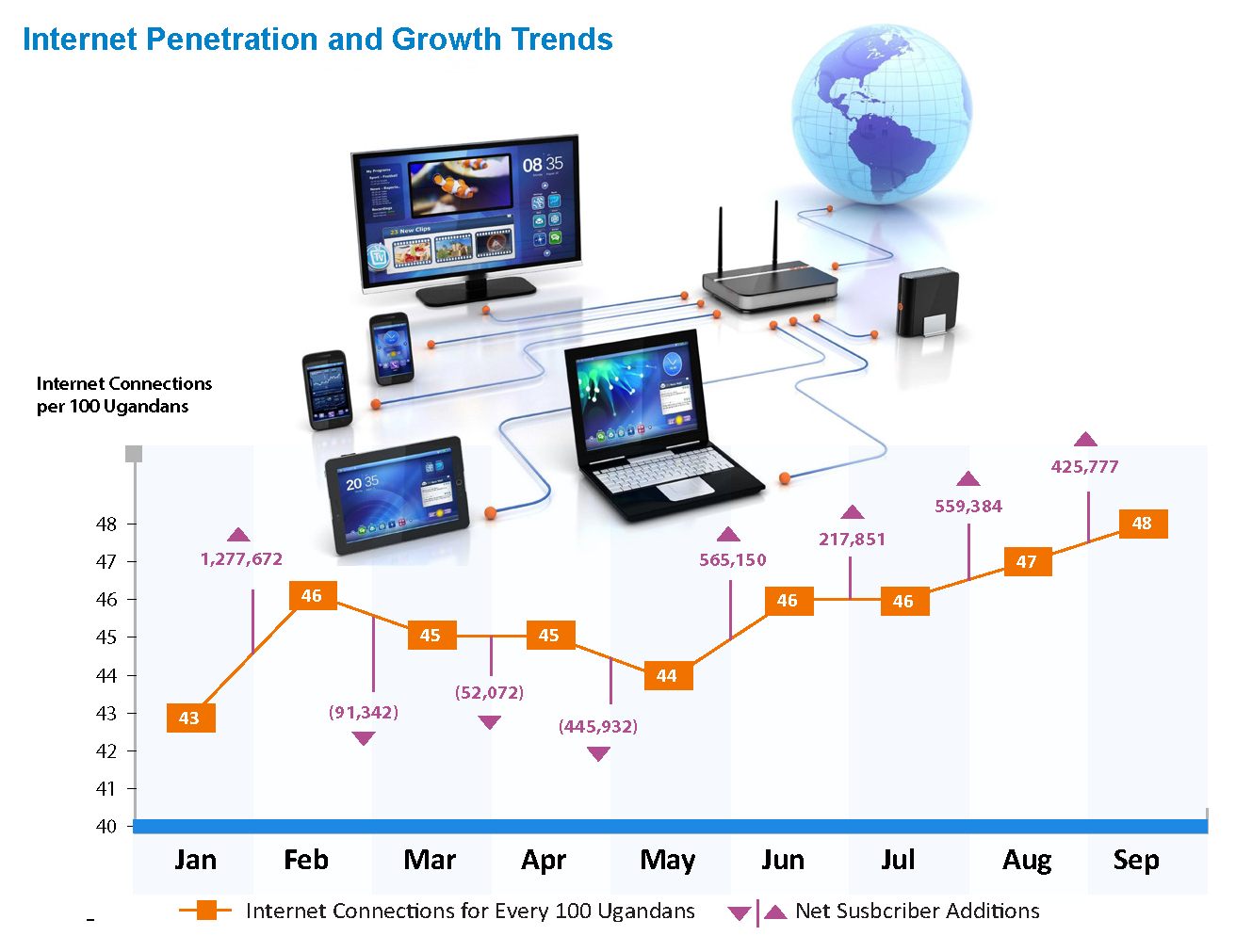 New applications and solutions continue to find their place in public health services, where digital contact tracing has become a versatile tool despite the early data privacy concerns.

COVID-19 has also increased the global demand for 5G, partly on account of sustained work-from-home technology demands. To meet the new 5G demand, more than $186 billion has been invested globally in 5G network rollouts to date, the report stated.

In Africa, it is estimated that by 2025, approximately $60 billion will have been invested in network infrastructure upgrades for 5G. A few trials have already taken place in South Africa, Nigeria and Lesotho.

In Uganda, the National Task Force on the Fourth Industrial Revolution has released the National 4IR Strategy, identifying 5G and other emerging technologies as crucial service drivers and enablers across health, education, industry, and tourism among others.