In a November 20, notice change of advocate to the High Court in Kampala, law firm, Kalenge, Bwanika, Ssewa & Co. Advocates says it has been instructed by dfcu Bank, to represent them against a law suit slapped to them by Meera, Sudhir’s real estate firm, which seeks to cancel tittled properties that were being used by Crane Bank and illegally transferred to dfcu Bank on advice of Sebalu & Lule.

“Take Notice, that we, M/s Kalenge, Bwanika, Ssewa & Co. Advocates….have been instructed by the first respondent [dfcu bank] to represent it in the above proceedings, in place of M/s Sebalu & Lule Advocates,” reads a notice by the law firm.

The development now confirms that dfcu Bank has also kicked out Sebalu & Lule Advocates as the law firm suffers another a fallout after being fired by Bank of Uganda early this year. 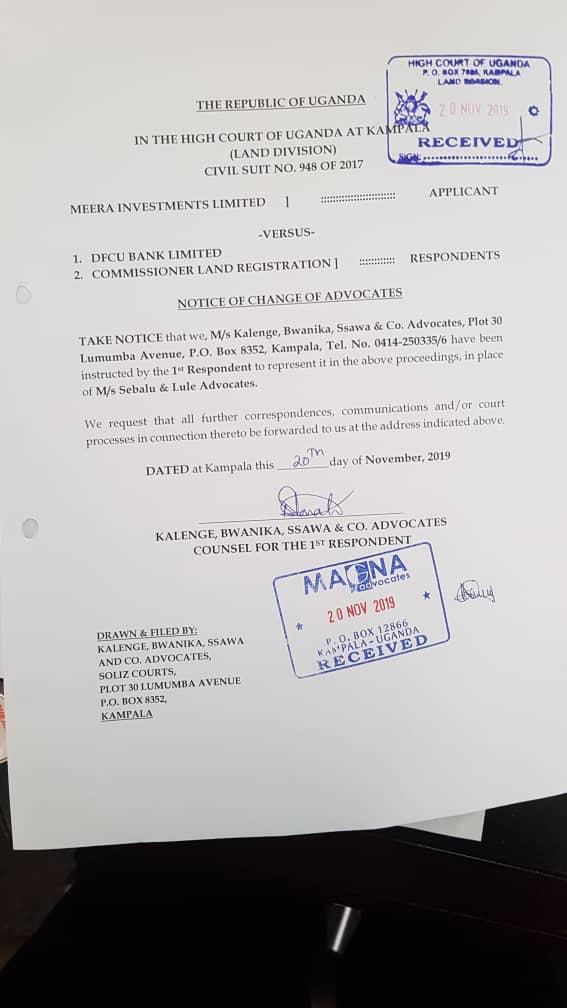 On April 29, Sebalu and Luke Co. Advocates were declared conflicted, and therefore unfit to represent the parties in a longstanding commercial dispute involving Bank of Uganda and Sudhir.

In his April 30 ruling, Justice Paul Gadenya Wolimbwa, kicked Sebalu & Lule Advocates out of any commercial disputes involving, Mr. Ruparelia and his Crane Management Services, because “the Applicant has made out a case that the first respondent (Sebalu & Lule) has relevant information of the applicant. The information is relevant and I accordingly grant an injunction restraining the first respondent from handling any case involving the applicant”.
The judge ordered the respondents to “pay costs of this application”.

Sebalu & Lule Advocates were barred by the High Court from representing the dfcu bank against city tycoon Sudhir Ruparelia for being conflicted.

It is also said that Sebalu & Lule intentionally misled the dfcu Bank to transfer leasehold titles from Crane Bank Ltd during the controversial takeover two years ago.

In document titled Transfer of former Crane Bank household properties, dated May 8, 2017, “the law firm skipped important aspects of the law including the fact that banks are not allowed to invest in business for fear of conflict of interest with their clients, apart from their main premises” banking analysts said.

“In light of the lengthy of time between the completion of date and when dfcu can vividly exercise the option to rescind the purchase of household properties, our recommendations is that the transfer be registered immediately,” reads an excerpt from the document.

According to industry experts, the whole procedure was entangled with fraud as there was no consent from the Landlord (Meera Investment Ltd) before transferring the lease to another party.

Experts says this, “nullifies the transfer because lack of consent alone nullifies the whole procedure” as ownership belonged to Meera Investment Ltd, an independent body from the defunct Crane Bank Ltd.

Experts also wondered how ‘senior’ lawyers like Sebalu & Lule Advocates could have ignored such a very important aspects of law, causing dfcu massive losses in billions of shillings.

Look into the arts industry! Bebe Cool cries to Museveni