KAMPALA – The Central Bank has warned the public against engaging in the business of foreign exchange without a license saying this is in accordance with section 5 of the Foreign Exchange Act, 2004.

In a statement on Thursday June 7, 2019, the Bank states that ”all persons interested in buying and/or selling foreign currency must do so at a Forex bureau licensed by the Bank of Uganda”

The Bank of Uganda also notes that it has stepped up efforts to tighten forex trading regulations to weed out fraudsters from the lucrative business.

“It has come to the attention of Bank of Uganda that a number of people are engaged in the illegal exchange of money at locations with in Kampala, other major towns and border points,” the Central Bank noted in a statement. 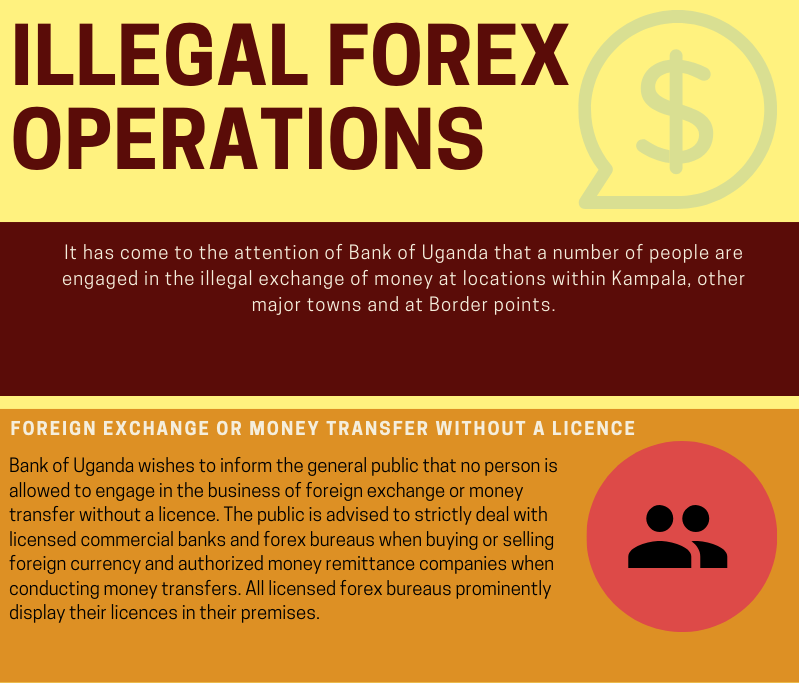 “The public is advised to strictly deal with licensed commercial banks and forex bureaus when buying or selling with foreign currency and authorized money remittance companies when conducting money transfer.

The Central Bank argues that illegal forex trading stands to trigger inflation in the in the country and weaken local currencies, which would make imports expensive and further, worsen budget deficits for the country’s economy.

As a result, the banking regulator has launched a crackdown on this illegal business by suspending the licensing of new forex bureaus, arresting some key suspects and barring suspect commercial banks from the interbank forex markets.

The central bank has also warned forex bureaus and money remitters to be vigilant and avoid becoming conduits for money laundering.

The police have been hunting down illegal forex dealers since 2015, and several suspects have been arrested and detained, according to the Bank of Uganda.