KAMPALA – Speaker Rebecca Kadaga has ordered the Parliament’s Committee on Commissions, Statutory Authorities and State Enterprises (COSASE) chairman Mubarak Munyagwa to back off a fresh probe on defunct commercial Banks.

In ordering the halt to Mr. Munyagwa’s schemes, the Speaker has accused the comical COSASE Chairmam of multiple breaches of several parliamentary rules of procedure and paying much attention to a matter that was comprehensively probed by the former team headed by Bugweri MP Abdu Katuntu.

In a letter dated June 10, 2019, addressed to Mr. Munyagwa, the Speaker noted that there is no need to re-open the investigations considering that the same committee early this year concluded the probe, presented a report which was debated and adopted by the House.

“I am of the opinion that your action in trying to re-open a matter that has already been substantively considered and finalized by Parliament in the very recent past, in the absence of a fresh report of the Auditor General on the subject or authority of the House, whose delegate the committee is, is not founded in the Constitution or indeed in the Rules of Procedure of Parliament,” Kadaga said in her letter. 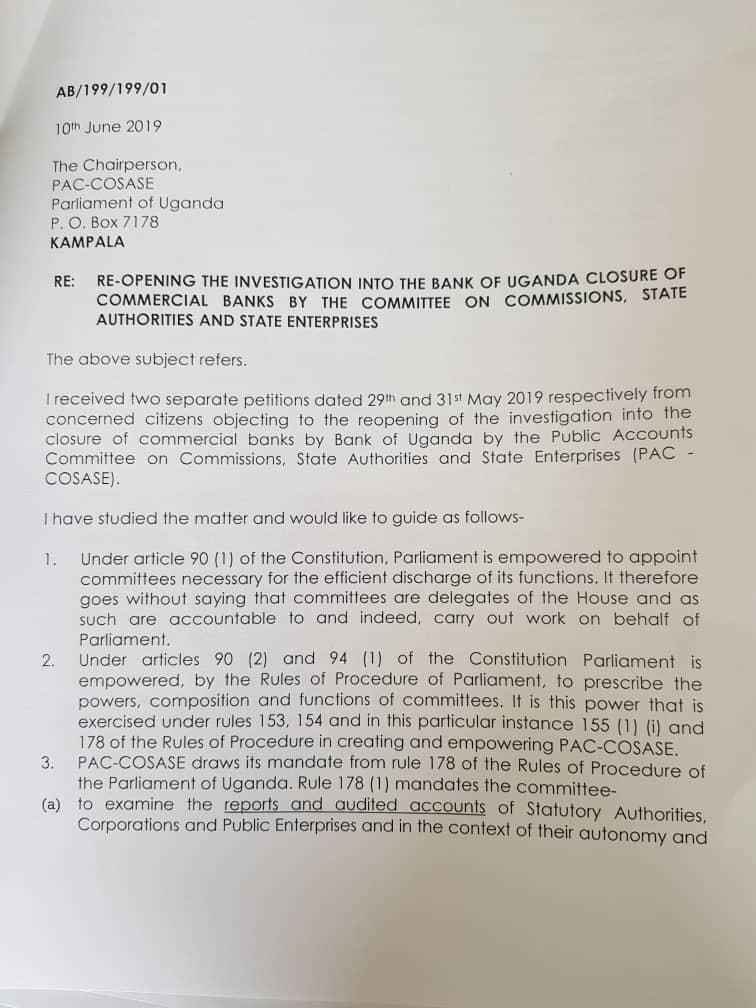 Citing rules of Procedure, the Speaker noted that it is out of order to attempt to reconsider any specific question upon which the House has come to a conclusion during the current Session.

“I note that no motion was moved either by you as Chairperson or by any other member to that effect. I therefore propose and guide that you should refrain from further proceeding in relation to this matter until otherwise directed by the House,” Kadaga said. 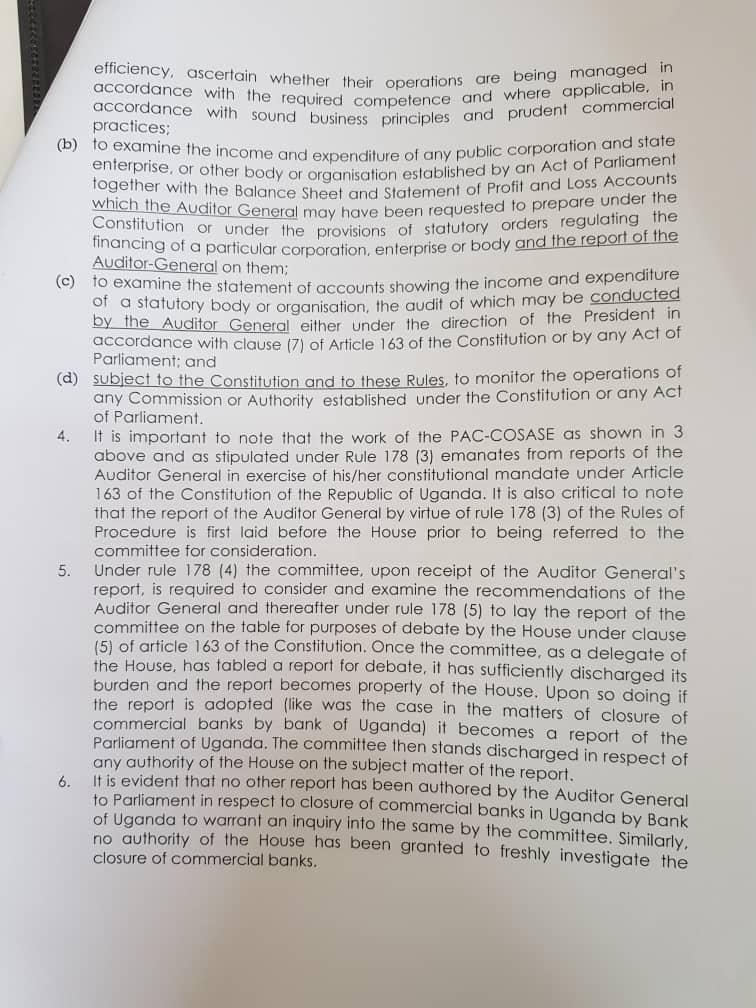 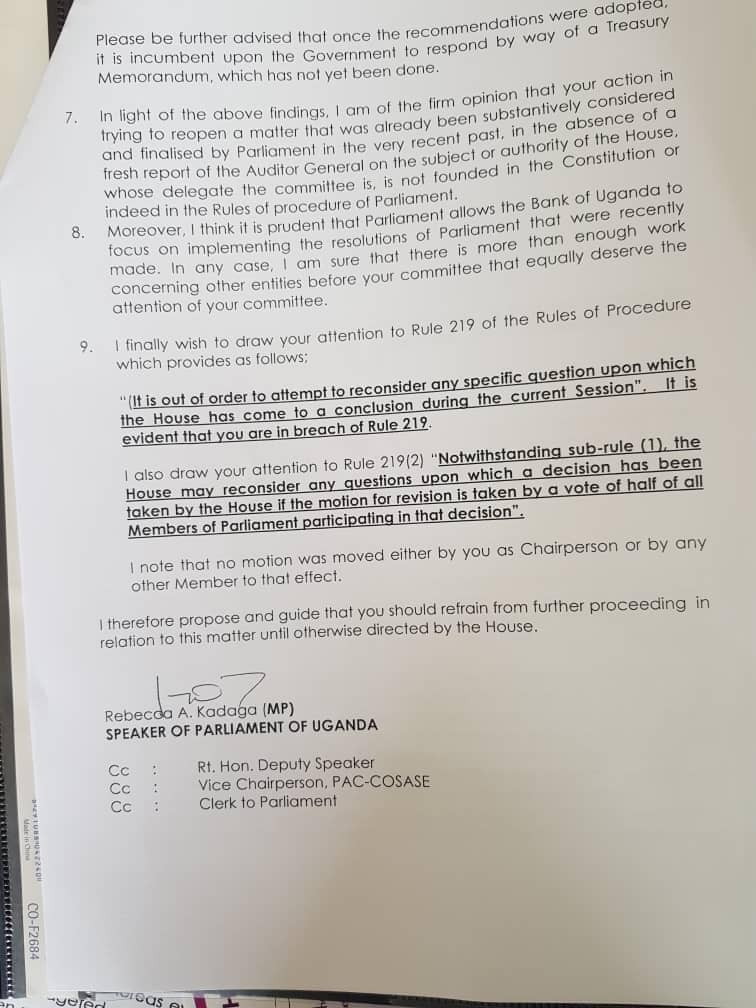 Mr. Munyagwa has come under public scrutiny after commentators and concerned citizens petitioned the Speaker, accusing the new COSASE chairman and his deputy Makindye East MP Kasozi of hatching a window to cover up issues contained in the old committee report made by their predecessors led by Bugweri County MP Mr. Abdul Katuntu and Bukedea MP Ms. Anita Amongi detailing the rot in the Central Bank.

Sections of MPs last week took on the new Committee of pushing for a fresh probe instead of pushing for the implementation of the existing Cosase report on irregularities in the closure of seven commercial banks.
Mr. Munyagwa recently appointed Mr. Kasozi, to head a sub-committee on the closed banks.

The report was adopted by the House with recommendations on the culprits in the central bank and proposed a raft of reforms at Bank of Uganda.

These claim that Mr. Munyagwa is trying to give the culprits a second chance to table accountability for UGX 478 billion which they failed to account for in the first probe.

Some MPs have vowed to block the fresh investigations into BoU and called Mr. Kasozi sub-committee “a conduit” designed to “sanitise the culprits” and help BoU officials “sneak accountability documents” to the office of Auditor General.

Mr Michael Bukenya recently petitioned Ms. Kadaga to block Mr.Kasozi’s from wasting tax payers’ money in re-investigating finished business.
“….this is to request you to prevail on said committee not to expand state resources (money and time) on re-examination which is outside its mandate,” he noted in a petition that was received by speaker’s office.

He also alleges that this is a syndicate and diversion created by Deputy Governor Louis Kasekende and Director Tullow Oil Jimmy Mugerwa to sabotage the previous findings of the former Chairman Katuntu.