KAMPALA – The dfcu bank has recorded an impressive Shs127.6bn net profit in the year ended 31 December 2017, up from Shs46.2bn registered in 2016, results released on Thursday indicate.

However, the spotlight is focusing on the bank and it’s hoist of European owners following the implications of this huge Shs81.4bn profit leap, up from last year’s Shs41.2 billion that comes in the aftermath of the takeover of Crane Bank that is currently shrouded in controversy.

According to dfcu bank’s financial statements released on Thursday, the bank registered impressive results on all key performance parameters save for the high Non-Performing Loans (NPLs) and bad loans written off. NPLs increased by Shs38.3bn to Shs96.6bn in 2017, up from Shs58.3bn in 2016, while bad loans written off rose to Shs27.2bn, up from Shs5bn in 2016. The high NPLs were taken over from Crane Bank.

The bank registered a tough second half of the year after it posted an impressive Shs114bn net profit in its half year results for 2017, up from Shs23.3bn in June 2016, meaning that in the six months to December 2017 dfcu only made a net profit of Shs13.6bn.

Customer deposits also increased to Shs1.98 trillion in 2017, up from Shs1.13 trillion a year earlier.

The dfcu bank acquired Crane Bank, the then 4th largest bank on February 27, 2017 at a fee later to be discovered as a paltry Shs 200 billion. However Former Crane Bank shareholders led by majority shareholder Sudhir Ruparelia and family have vowed to drag Bank of Uganda (BoU) to court, claiming their bank was sold to dfcu without considering their interests in accordance with the Financial Institutions Act. It has been discovered that the bank was sold for a paltry Shs200 billion as controversy rages on.

The bank’s mostly European shareholders will soon be smiling to the bank after proposed dividends increased to Shs51bn, up from Shs18.5bn in 2016.

CDC Group of the United Kingdom 9.97% 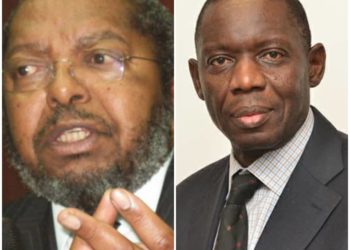