The qualifiers for African groups were due to start in June but the May 6, Caf communication, indicate that the competition will now be staged in the ‘existing windows of September, October, and December, 2021 as well as March 2022.’

Uganda Cranes was due to travel to Nairobi to face Kenya’s Harambe Stars next month, before hosting Mali on matchday two between June 11-14 at St. Mary’s Stadium – Kitende – the only venue in Uganda that’s currently fit to host games of world cup status, according to Fifa.

Uganda is pooled in Group E alongside Mali and neighbours Kenya and Rwanda.

The postponement of the qualifiers to September, could be a blessing in disguise on the Ugandan side, especially if the authorities could take advantage of break to fix the most placing needs at Mandela National Stadium – Namboole to meet the Fifa requirements.

“The Caf Emergency Committee, in conjunction with Fifa, decided to postpone the Caf qualifiers for the Fifa World Cup Qatar 2022 that were due to be played in June 2021, after taking into consideration the current challenges caused by the COVID-19 pandemic, and the need to ensure optimal playing conditions for all teams,” reads the Caf letter, in parts.

Caf had earlier in the week, listed a number of stadia, across the continent, that were fit to host the postponed qualifiers – and Uganda had scrapped its way – through via the availability of Vipers SC stadium – St. Mary’s –Kitende – a development, which came as a relief to hundreds of football fans, who had already started cursing and castigating authorities for ‘neglecting’ Namboole and ‘abandoning’ Nakivubo War Memorial Stadium. 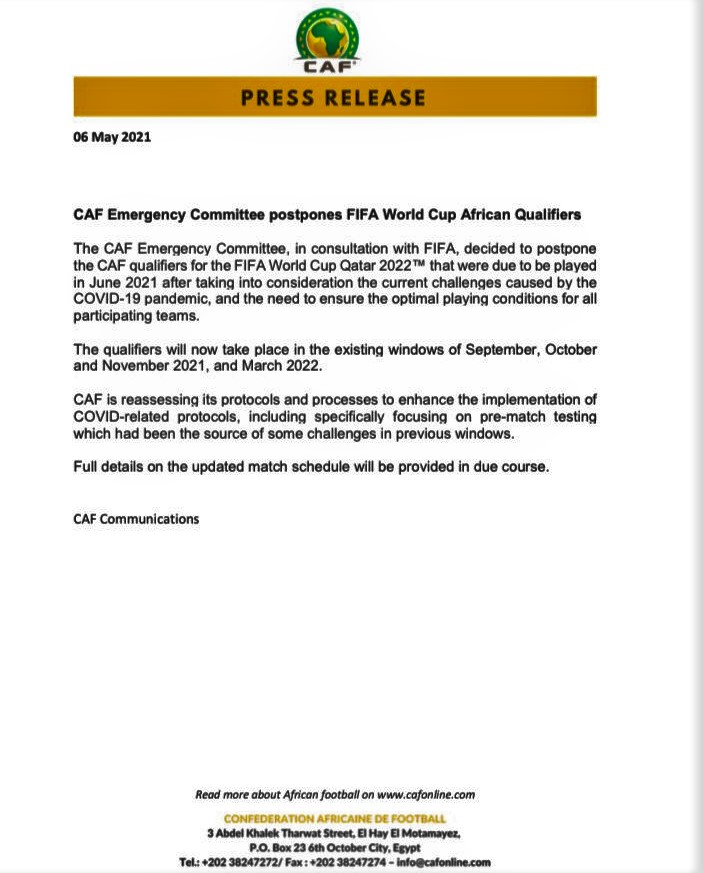 Caf, according to its communication arm, is now also re-assessing its protocols and processes to enhance the implementation of COVID-related procedures – including specifically focusing on pre-match testing, which had been the source of some challenges and disputes in previous windows.

Local soccer governing body – Fufa bosses announced recently that they had turned their focus onto the World Cup qualifiers, especially after Uganda lost out on a chance to make a third straight appearance at the upcoming African Cup of Nations – Afcon finals scheduled for Cameroon.
Malawi beat Uganda in the last game to secure a slot at the finals after The Cranes had flopped against South Sudan in Nairobi, and drew with Burkina Faso at Kitende – which performance has since forced Fufa to end its relationship with head coach Johnathan McKinstry as three players in captain Denis Masinde Onyango, Hassan Wasswa, and Mike Azira, separately announce from the national team.